love rescued from the grave

I’m sure many of us have said goodbye to a best friend for what we both believed, or knew, was the last time. In our lives, we say goodbye to a lot of people that we’ll never see again, and we’re fine with it. Sometimes we play games and say stuff like, “see you later,” when we know very well there will be no “later.” (At least, not in this lifetime.)

It can be an awkward moment. But with our best friend, it’s more than awkward—it’s painful. Silly games like “see you later,” “hasta la vista,” just won’t work, and we both know it.

I’ve had this kind of experience once in my life, when I was preparing to graduate from the Assemblies of God college, Southeastern College in Lakeland, Florida. (It’s now Southeastern University.) In December 1988, I had finished my coursework and was joining the small number of students who also were ready to graduate. My roommate still had over two years to go. He was about to go home for the Christmas break.

There were times when he truly angered me and I wanted to strangle the guy. However, the fact that he could easily beat me up kept me from acting on that particular impulse! At the time, we seemed to have little in common. With a few exceptions, we were not into the same kind of music. He wasn’t terribly fond of books, movies, or sports. It seems like our faith was the only thing we really had in common, but as it turned out, that was more than enough.

Whatever the reason, I can say that he became my best friend. (I should add that this was before I met Banu. So by “best friend,” I mean my male best friend!) Even though he still irritated and embarrassed me at times with some of his antics in public, I came to love him. And so it happened on the day that a fellow student pulled up in the parking lot to take him to the Tampa airport, we each found ourselves at that terrible moment of saying goodbye to our best friend.

I just wanted him to get in the car and leave quickly. I could feel the pain increasing. As soon as the car left the parking lot, I turned and hurried back into the dorm. I didn’t want anyone to see me with my eyes watering up. Besides, I could barely see where I was going. Even then, in that moment, I was imagining myself tripping on the stairs and rolling back to the bottom. But I did make it to my room, where I put my head on my desk, and for about ten minutes, I just cried.

(As it turned out, it wasn’t the last time we saw each other. We got together several more times. In fact, he even attended Banu’s and my wedding. He now lives in Costa Rica, and I’ve Skyped with him from there.)

John 20 gives us another case of saying goodbye to a best friend. Of course, in this case, the best friend is Jesus. And he’s not on his way to the airport.

The story of Easter in John’s gospel is unique. Mary Magdalene is the primary focus. Sure, Simon Peter and the other disciple, “the one whom Jesus loved,” run through the scene. But it’s Mary who steals the show. 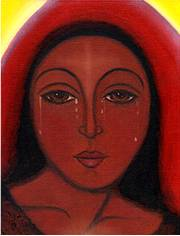 After all the excitement, with Mary running to tell the others that the body of Jesus is missing, with them running to the tomb, with them searching around inside, with them giving up and going back home—after all of that—we’re left with Mary, just standing there and crying.

The quiet of the empty tomb is deep. Only her tears fill that silence. Mary Magdalene has lost her best friend: some say, more than a friend.

But the stillness is soon broken. She takes another look into the tomb, and Mary sees what must be two people. She laments that Jesus’ body has been taken away. “Have you seen it?” Their brief conversation leaves her feeling disheartened and dismayed.

Suzanne Guthrie speaks of these encounters in the darkness of that Easter morning, the not-yet dawning of light. The day before, what we now call Holy Saturday, was the sabbath, the day of rest. Guthrie doubts that Mary’s sabbath was a day of holy respite. “More likely,” she says, Mary “spent her sabbath in a hell-fury of grief and recriminations against Romans, against the Sanhedrin, against the very Creator of the universe. And perhaps against Jesus himself.”*

Guthrie elaborates, “What is loss but the experience of love, after all? If you did not love, there would be no loss.” Losing a best friend is love lost.

Into that hopeless emptiness a real presence emerges. It is Jesus, but Jesus as yet unrecognized. Jesus emerges into our emptiness. Do we recognize him?

We see that lack of recognition in verses 14 and 15. Jesus appears before her and asks the same question that those two strange characters asked, “Woman, why are you weeping?” She thinks he’s the gardener, the one tending the graveyard. “Just tell me where you placed his body, and I’ll take it away.”

Mary’s grief and sorrow prevent her from seeing the one she loves. She looks, but she doesn’t see.

But then something wonderful happens. Jesus speaks her name. The scripture says, “She turned.” She turns; her eyes are opened.

It is more than her grief that has prevented her from seeing him. He is no longer simply Jesus, the man they all knew. Standing before her is the Christ, the one raised from the dead—love rescued from the grave.

Mary reaches out to him, crying, “my teacher.” And if coming back from the dead isn’t crazy enough, things start to get really weird! Verse 17 is a real head-scratcher.

“Do not hold on to me,” he says. What a strange thing to say. Can’t he see her joy? Why can’t he give this to her? Or is there something more? There must be, since he doesn’t stop there. “Do not hold on to me, because I have not yet ascended to the Father. But go to my brothers and say to them, ‘I am ascending to my Father and your Father, to my God and your God.’”

For St. John, ascension is the continuation of resurrection. That’s what we see in this gospel. There’s an evolution from Jesus being raised from the dead to being the Christ who fills all things, as St. Paul puts it, “who fills all in all” (Ep 1:23).

Our friend Suzanne says that “in this world you cannot cling to love. You cannot hold or hoard it. In a suffering world, there is no time to linger in the sacred moment. Instead, every love must transfigure into ever-widening circles of compassion. This love must go out to the ends of the earth with the message of hope.” 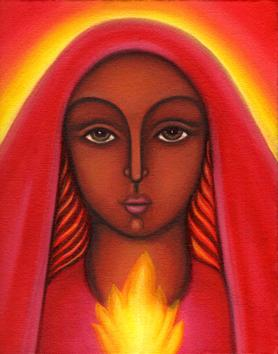 It’s true; love causes us to tumble out of control. We fall into it. But love isn’t simply some wishy-washy feel-good emotion; that’s infatuation. No, love calls for pretty serious demands.

And the first demand made of Mary Magdalene is for her to act on that love. She is to go back to the other disciples and spread the message. “I have seen the Lord! Jesus is risen!” That’s how she gets the nickname, “apostle to the apostles.”

Whether or not the others believe her is pretty much out of her hands. It’s up to them. All she can do is allow that love rescued from the grave be shown in her words, and much more, in her actions. It’s as simple as that, and as difficult as that! I think we all can testify to that tricky balance.

When we fail to act on love, it begins to wither and die. It shrivels, and we with it. But when we are granted the amazing grace of love rescued from the grave, it is given a new chance. It becomes a new creation, part of a brand new order. It is the second chance, the second chance that we always need.

Love can die, but it still is a candidate for resurrection. It can ascend and fill all things. Remember, love isn’t something we have to feel. In fact, most of the time, we are oblivious to it. It surrounds us and only asks that we join with it. What then are we to do?

I said that love makes serious demands. Here comes the part I don’t like, and maybe I’m not alone. If we join with love, we can’t run from it. We can’t avoid suffering. Suzanne Guthrie, and a multitude of others, links loss with love. That’s the story of the three days that just ended, Maundy Thursday, Good Friday, and Holy Saturday. Guthrie, and a multitude of others, say love must be transfigured, transformed. That is what it means to join with love.

But remember that Christ is with us, especially and primarily in community. He raises us up. St. Paul says in 1 Corinthians 15 “as all die in Adam, so all will be made alive in Christ. But each in his own order: Christ the first fruits, then at his coming those who belong to Christ” (vv. 22-23).

Like a tree flowering in spring, Christ is the first fruit of resurrection, of new life, but we join with him. We have to be brought back from the dead—it would seem, over and over! And knowing ourselves, that takes a miracle, something like a Lord being raised from the grave.