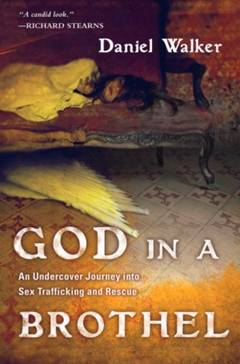 “I was hungry and you gave me something to eat, I was thirsty and you gave me something to drink…I was imprisoned in a brothel and you rescued me.”
So begins Daniel Walker’s book God in a Brothel.  It’s a bold and blunt beginning and the rest of the book is nothing but boldness and bluntness.  The book is a primer on the ugly reality of human slavery—particularly sex trafficking.”
That’s how United Methodist pastor Roger Wolsey begins his review of the book, which he titles “Santa in a Brothel.”  He explains the name by noting that, having just read the book, the Christmas season will soon upon us.
He continues, “The basis of the Santa Claus myth is memory of a real life good guy who helped people in need.  Nikolaos was a historic person who was born in Patara in Asia Minor (modern day Turkey) in the 4th Century A.D. Nikolaos’ wealthy parents died when he was young and he was raised by his uncle, the Bishop of Patara.  Nikolaos became a bishop of the early Christian Church Myra in Lycia (who wore red clerical robes).  While bishop he learned of three young sisters who were destined to a life of poverty, and likely prostitution.  Nikolaos intervened by providing dowries—an abundance of gold—to each of the girls (placing it in their stockings according to legend).”
As he says, we have lost the deep sense of compassion of the man.  Life-changing hospitality has become, as a shopping season, an economic barometer.

As for the parable of the sheep and the goats itself (Mt 25:31-46), what really opened my own eyes to it was the song by Keith Green.  My roommate at Bible college introduced me to the artist who died in a plane crash in 1982.