I like words. I do; I love words. I’m fascinated by the whole concept of language. When I was young, I seriously thought about a career in science. I was, and still am, fascinated by mathematics—which is its own kind of language. Still, as I got older, I discovered a love of the humanities, the liberal arts. Language is central to the liberal arts, be it history, literature, philosophy, or a number of other fields, including my college major, political science. (That term “political science” is strange to me. I’ve tended to think of it as more an art than a science!)

Unfortunately, no matter how much one may like words, they can prove to be slippery little devils. Words aren’t always the best way to communicate. That’s true, even when we’re careful with the words we use. 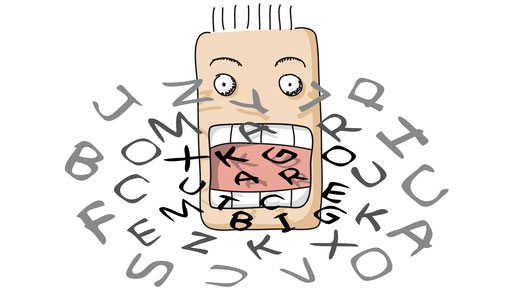 In a meditation on “choosing words wisely,” Henri Nouwen underlines the necessity of thinking before we speak. “When we are boiling with anger and eager to throw bitter words at our opponents,” he says, “it is better to remain silent. Words spoken in rage will make reconciliation very hard. Choosing life and not death, blessings and not curses, often starts by choosing to remain silent or choosing carefully the words that open the way to healing.”*

But even when we choose our words carefully, there’s no guarantee that the recipient of those words will understand or receive them in the way we intend. There’s plenty of puzzling over what is, in fact, being communicated.

In 1 Timothy 1:1-11, Paul is guiding “his true-born son in the faith” on the pros and cons of using words. He warns him of “certain people” who are “teaching erroneous doctrines and devoting themselves to interminable myths and genealogies, which give rise to mere speculation, and do not further God’s plan for us, which works through faith” (vv. 3-4). You may find this impossible to believe, but there really are people who enjoy using words, not for the sake of clarity or faith, but rather, they’re motivated by listening to the sound of their own voices—or seeing their own words in print or on the internet.

The instruction of the apostle to his younger colleague—which includes correcting those who are disrupting the well-being of the community—“has love as its goal, the love which springs from a pure heart, a good conscience, and a genuine faith” (v. 5). If this is absent, everything else is useless. We can have true words, but without that love, they become false.

Paul alerts Timothy to those who go off course. It’s easier to notice when someone is spouting complete nonsense. What’s more difficult is when the teaching—or ordinary conversation—is apparently in line with the truth. In verse 6, Timothy gets this caution from his teacher: “Through lack of these some people have gone astray into a wilderness of words.” That’s how it reads in the Revised English Bible. I must confess; I believe I have spent some time in that wilderness. There have been times when I was talking about stuff I really didn’t understand.

The Greek word mataiologia literally means “vain” or “empty talk.” The neglect of love leads to empty talk. When we’re more concerned with winning a debate than seeking the truth, we wind up in that wilderness. Paul warns against those who “do not understand either the words they use or the subjects about which they are so dogmatic” (v. 7). Here’s how the Good News Bible puts it: those who “do not understand their own words or the matters about which they speak with so much confidence.” Unfortunately, we have no shortage of that.

When love is absent, our actions are worse than useless; they’re positively harmful. Jesus is not served through hateful words and deeds. He weeps when we indulge in that spiteful foolishness. And it’s especially bad when we do that stuff in his name—when we claim that our Christian faith leads us to do horrible things.

When we yield to the powers of death and hate within us, we have no gospel. We have no good news, for ourselves or for others. We only have bad news. We demonstrate how poorly we know and love Jesus.

Fortunately for us, Jesus knows all about wilderness—even a wilderness of words. In the wilderness, he is tempted by the devil. And in what form do these temptations come? Don’t they come in the form of words that sound true? One of the temptations is even backed up with scripture.

Jesus shows us a world without fear, anxiety, or rejected emotions. He shows us a world where his words bring about the reality of his truth as the living Word. Jesus speaks into the wilderness without his words being a weapon manipulating the reality of love. When we sense that we’re lost in the wilderness—even a wilderness of our own choice—we do indeed spend our energy on controlling, oppressing, hurting…without patience, forgiveness, mercy, but only passing judgment.

As I just noted, yielding to the powers of death and hate within leave us with no gospel: no good news, for ourselves or others. We only have bad news. We keep Jesus at arm’s length.

But Jesus is the one who leads us to safety. Our job is to fight the appalling appeal of hardening our hearts. Remember that our words alone do not convey truth. For that, we must submit to the living Word who is Jesus the Christ. May he shine in and through our words.

* www.henrinouwen.org (from Bread for the Journey, Daily Meditation for 5 September 2010)