Tepid water, please.  That’s a request uttered on The Big Bang Theory.  For those who don’t know, the show is about four nerdy scientists who are socially challenged.  Eventually, one by one, they start dating women who teach them how to behave like semi-normal men.  Sheldon Cooper, who is played by Jim Parsons, is the most intelligent among them but the least functional in dealing with other human beings.  A couple of his friends put his profile on a dating site, and they pressure him into meeting his match at a coffee bar. 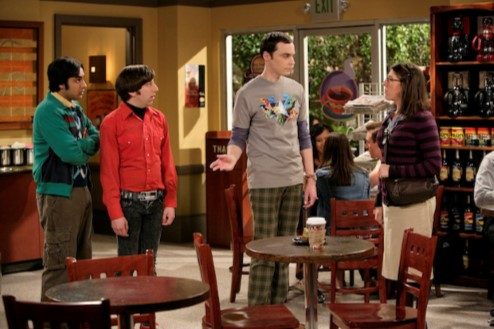 It turns out to be Amy Farrah Fowler, played by Mayim Bialik, who as a teenager starred in the 90s show Blossom.  She’s as socially dysfunctional as Sheldon, and she confesses her aversion to romantic involvement.  That actually piques his interest, so he offers to buy her a beverage, to which she replies, (guess what?) “tepid water, please.”

(By the way, later on, they do get romantically involved!)

Tepid.  That probably serves as an apt description of the church of Laodicea, the recipient of the seventh letter to the churches in the book of Revelation.  Verse 16 of chapter 3 is the one often considered to be the most colorful description of that church—or should I say the least colorful?  “So, because you are lukewarm, and neither cold nor hot, I am about to spit you out of my mouth.”  That’s the message of Jesus Christ through his servant John.

But you might ask, “What are these seven letters to the churches in Revelation you speak of?”  That’s a good question.  It’s one I will try to answer.  In chapters 2 and 3, the letters are messages to churches in Ephesus, Smyrna, Pergamum, Thyatira, Sardis, Philadelphia, and lastly, Laodicea.  All of these churches are in Asia Minor, which is modern day Turkey.  John, the author of Revelation, delivers words appropriate for every church’s situation.  They are the addressees of the book of Revelation.

Each of the letters follows the same format; there are three parts.  First, it’s “These are the words of” followed by a description of the risen Christ.  Then it’s, “I know” followed by something about the church.  And finally, “Let anyone who has an ear listen to what the Spirit is saying to the churches.”

One more thing about the seven churches.  Only Sardis and Philadelphia receive no word of criticism.  All the rest are told there’s something against them.  With her request for tepid water, could it be Laodicea is the “Amy Farrah Fowler” of the seven churches?  (More about the water in a few moments.)

The first thing the Laodiceans are told is they’re hearing the “words of the Amen, the faithful and true witness, the origin of God’s creation” (v. 14).  “Amen” isn’t a sign you just finished the prayer!  It’s used to describe something as “true,” to say “so be it.”  This one is called “the origin [or the beginning] of God’s creation.”  Christ is the one through whom all things were made.

G. K. Beale says something about Christ being called “the faithful and true witness.” “With the image…in mind, the Laodicean Christians are indicted for being generally ineffective in their faith. Their innocuous witness is the specific focus.”[1] 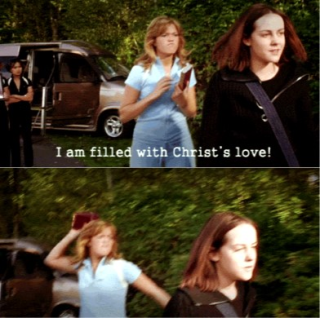 There’s something in the Wisdom of Solomon, one of the books in the Apocrypha, that I like.  It’s what the unrighteous say about a faithful man.  “He professes to have knowledge of God, and calls himself a child of the Lord.  He became to us a reproof of our thoughts; the very sight of him is a burden to us, because his manner of life is unlike that of others, and his ways are strange” (2:13-15).

A faithful life, almost by definition, will be seen as offensive by those who are dead set against it.  It’s an unpleasant reminder that one does not have to choose a wayward path, a constant refusal, a constant saying “no” to the Holy Spirit.  There is a better way to be.  (“Listen to what the Spirit is saying to the churches.”)

What about this business of being hot or cold?  “I know your works; you are neither cold nor hot.  I wish that you were either cold or hot” (v. 15).  And as we saw earlier, their being lukewarm makes the Lord want to upchuck.  That might raise a question.  Could we see being hot as being aflame with the Spirit, being on fire for God?  If that’s so (and I’ve heard preachers put it in those terms), would being cold in the faith an acceptable option?  Why would the Lord want that?

Bruce Metzger in his book, Breaking the Code, suggests looking at it differently.[2]  He reminds us of the situation the Christians were in.

Among them “were those who thought there might be a middle ground between worshiping God [that is, being hot] and worshiping the emperor [being cold] that in some way they could remain in the…church while at the same time obeying the emperor’s command to worship him.  On the contrary, in their loyalty to Christ they must be ‘hot’; those who were content to be ‘lukewarm’ might just as well go to the extreme of being completely ‘cold.’”

The book of Revelation was written at the end of the first century.  The emperor of Rome at the time was a fellow named Domitian.  He was a real piece of work.  He became so proud and dictatorial he demanded to be called “our lord and god.”  Of course, faithful Christians couldn’t agree to that.  That title was reserved for another.  They were considered to be unpatriotic, since that was part of the civic duty of a Roman citizen.  They were also considered to be subversives, enemies of the state, enemies of the people.  They became targets for persecution.

So viewed this way, it’s impossible to worship Christ and worship Caesar.  If you compromise on that, at the end of the day, you’re worshiping Caesar anyway.  Might as well be cold and give it your all!

Now, about the promise to return to tepid water.

The region around Laodicea was noted for its hot, cold, and lukewarm water.  Our friend G. K. says, “The hot waters of Hierapolis had a medicinal effect and the cold waters of Colossae were pure, drinkable, and had a life-giving effect.  However, there is evidence that Laodicea had access only to warm water, which was not very palatable and caused nausea.”[3]  The city of Laodicea was quite wealthy, and so was their water.  Their water was quite rich—rich in salt, that is.

Just like their water, the behavior of the Laodiceans makes the Lord sick to his stomach; he’s ready to vomit.

These folks are pretty clueless, because they claim, “I am rich, I have prospered, and I need nothing.”  The Lord replies, “You do not realize that you are wretched, pitiable, poor, blind, and naked” (v. 17).  It’s like the Emperor’s new clothes.  They’re strutting around, wanting people to “ooh” and “ahh” over their fine fashions—while the whole time, they’re as naked as a jaybird. 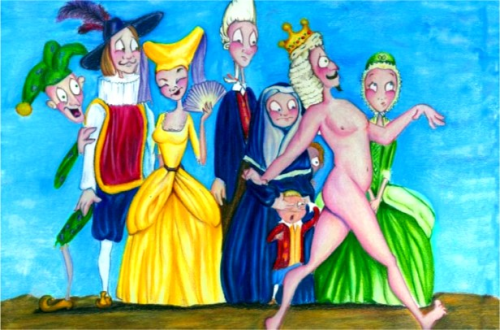 Here’s one more quote from Beale: “The picture of ‘eye salve’ for regaining sight emphasizes the Laodiceans’ lack of spiritual discernment, especially their ignorance of the lethal danger that their association with idolatry posed for their faith.”[4]

Spiritual discernment.  What an opening into the interior life of faith.  The application of salve for vision happens when the Spirit anoints our inner eyes.  The Laodicean church needs cataract surgery.  Their vision has become cloudy.  They have been blinded by their pursuit of idols.  They are in danger and don’t know it.  Idols have focused them on the wrong things.

We aren’t immune from that.  We have idols which beckon to us.  Anything setting itself up on the throne of our heart is an idol.  It happens more easily than we think.

My wife has been reminding me of something I once knew, and truth be told, still do.  Whatever we choose to live into is made manifest in our lives.  Here’s one very trivial example, just to make the point.

Several months ago, I was watching television.  It was a lovely, peaceful night.  For some reason, I began thinking about bats.  I was thinking about how we hadn’t seen one for a long time, and there certainly are bats in that building.  I started wondering if there was in fact a bat somewhere, ready to fly into the room.  It was almost like I was conjuring it.  And guess what?  It wasn’t but a few minutes before one of those critters appeared out of nowhere and started circling the room. 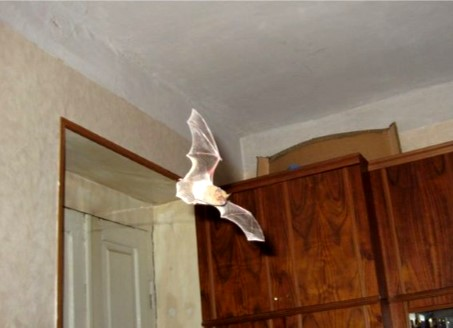 I’m not saying my thoughts manifested a bat.  I’m not saying I created one, but there is a sense in what occupies our minds, what we put out into the world, does in fact come back to us.

I suppose this has been a roundabout way of describing how the lack of spiritual discernment leaves us open to deception by idols.

If verse 18 shows us the way home, the rest of the letter to the Laodiceans is a loving, powerful invitation.  Telling us he reproves those he loves, he immediately says, “Listen!  I am standing at the door, knocking; if you hear my voice and open the door, I will come in to you and eat with you, and you with me” (v. 20).  Let’s sit around the table and enjoy each other’s company.

If we open the door, we will be conquerors, fit to sit on the throne Jesus prepares.  “Let anyone who has an ear listen to what the Spirit is saying to the churches” (v. 22).

We request, “Tepid water, please.”  Jesus says, “Forget that.  I welcome you to the banquet.  Sit down and feast with me.”

to the seven churches

Last Wednesday and this coming Wednesday, we’re looking at the seven churches who were the original recipients of the book of Revelation. They were located in the western part of modern-day Turkey. In chapters 2 and 3, they are, in order: Ephesus, Smyrna, Pergamum, Thyatira, Sardis, Philadelphia, and Laodicea.

In the messages to the “angels” of the churches, we notice a great deal of parallels. First, there is mentioned an attribute of the heavenly Christ (an attribute mentioned in chapter 1). Then there’s a statement, “I know…” certain qualities of the church—both good and bad. Each finishes with, “Let anyone who has an ear listen to what the Spirit is saying to the churches.” That’s joined with a promise for those who “conquer” or “overcome.” (The Greek word is nikaō, source of the word nike, “victory.”)

What can we learn from the carefully crafted repetition in the letters to the seven churches? What about the characteristics of the heavenly Christ? Why does our author employ the literary style that we see?

(The image is by Douglas Christian Larsen.)