Banu and I were ordained in February 1997.  Both of our pastors, just before the benediction, gave us a charge.  Banu’s pastor charged her “to fail.”  He wasn’t wishing ill on her, rather, he wanted her to take risks that would probably end in failure.  Still, keep pressing on.  That’s advice I need to remember.

Using imagery from the parable of the prodigal son, my pastor charged me to tell my story of being in a “distant land,” a “far country.”  He might have thought of several things, like my worshipping with Christians of many different stripes.  (One example would be going from the Assemblies of God, a Pentecostal church, to going to the Presbyterian Church.)  But his main meaning of being in a “far country” was my experience with brain cancer. 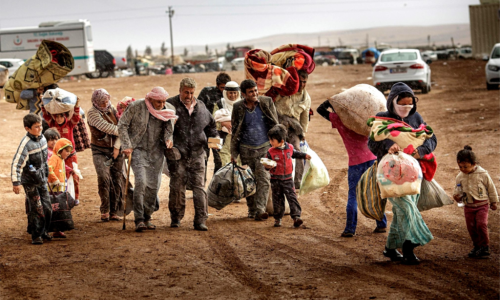 The charge to fail from Banu’s pastor also has that sense of exile, of not belonging.  His church was in an inner-city neighborhood of Philadelphia.  The streets around the church were not in good shape.  There were even what you might call ditches.  He spoke of a pansy that he saw growing in one of those ditches.  That pansy didn’t know it wasn’t supposed to be there, but we might think it was in exile, a place where it didn’t belong.

We can see that sense of exile, of being in a far country, in our epistle reading in 1 Peter.

In the very first verse of our letter, Peter calls his audience “exiles.”  The Greek word (παροικια, paroikia) can also mean “sojourning” or “living in a strange land.”  For them, being exiles, being refugees, is something they can relate to.  For us, it’s no doubt less likely.  But it is possible.  It’s more likely we would at least feel that way.  Have you ever been—or are you now—in a far country?  Can you see yourself as an exile or as a refugee?  In this season of Easter, can we see ourselves as resurrection people?

I want us to think about that.  If we can’t imagine or feel the need to live another way, then it will be pretty difficult to in fact live any other way!  If we have no longing to live more deeply, more fully, then in a sense, we’re already dead.  We need to be resurrected!

Peter picks up the theme of exile in verse 17.  “If you invoke as Father the one who judges all people impartially according to their deeds, live in reverent fear during the time of your exile.”

the chapel at Emmaus Community in Victoria, BC

When I speak of Christians who claim the identity of exile, I’m thinking especially of those who might be called neomonastics, the “new” monastics.  From every tradition and denomination, these are Christians who really do put into practice the idea of “blessed be the tie that binds.”  They don’t live in monasteries, but as communities of faith, they make a commitment to follow Christ in a particular way, which I’ll get to in a few moments.  They do this as communities, not just as a collection of individuals.

They take Peter quite seriously when he says in verse 22, “Now that you have purified your souls by your obedience to the truth so that you have genuine mutual love, love one another deeply from the heart.”  That last line in the Good News Bible says to “love one another earnestly with all your heart.”  How about Eugene Peterson’s The Message?  It’s “love one another as if your lives depended on it.”  The original word (εκτενως, ektenōs) means “intensely.”

Kyle Childress, a long-time Baptist pastor in Nacogdoches, Texas, tells an interesting, and sobering, story.[1]  In September 2005, a month after Hurricane Katrina hit Louisiana and Mississippi, Hurricane Rita slammed into East Texas.  There was plenty of destruction, but their church building avoided the worst of it.  They were able to house some evacuees from Houston, as well as some of their own church members.

During the day, people would be cleaning up from the hurricane.  At day’s end, they gathered at the church, eating delicious meals—then playing games, having conversations, and getting ready for bed.  It was, as Rev. Childress says, “a good time of sharing life in Christ” (p. 33).  Now, here’s the story he tells.

“After most of the people from Houston had left town,” he says, “I went down to put gas in my car.  By this time, the lines were short and I waited behind a man and his wife in their one-ton pickup with a dual-wheel rear-end.  Guns were hanging prominently in the truck as they got out.  She glared at everyone and kept the door open on the truck with the guns in easy reach, while he proceeded to fill up his two twenty-two-gallon tanks on the pickup and then fill up his many gas cans and two fifty-five-gallon drums in the back-end.  I watched them, gave them a wide berth, and I felt a shiver.  I was not only looking at American society in microcosm, I was also witnessing what the Church is up against.  Here was an apocalyptic moment, when our society’s pretense, politeness, and orderliness were blown aside.  Clearly, this couple believed they were on their own; they did not need anyone or want anyone to interfere with their individual lives, and they were going to make sure they got what they wanted or needed, by any means, including the use of violence.  Meanwhile, down the street was a church full of people who believed that the good life was found in sharing a common life in Jesus Christ” (34).

He continues, “Since it is rare to see local congregations share such a common life, and most church members have no idea such a life exists, much less is desirable, it is imperative that we look around for other glimpses and models of what a common life might look like.  One of those places is among the communities of the New Monasticism movement.  As a local church pastor I am interested in what the new monastics might teach us” (34).

He’s not proposing that his local Baptist congregation become a neomonastic community, but he’s convinced there are things to learn from them.

A rule of life isn’t so much a set of beliefs; it isn’t so much a confession or a creed.  It’s about how we behave in the world.  Probably the best-known rule of life is the Rule of Benedict.  This goes back to the early sixth century.  Saint Benedict is known as the father of western monasticism.  He wrote his Rule to govern life within the monastery, but it has principles that can be applied in every walk of life.

One good example of this is in chapter 53.  Benedict says, “All guests who present themselves are to be welcomed as Christ.”  That’s the spiritual foundation for Christian hospitality that extends throughout the Rule, and for that matter, throughout life itself. 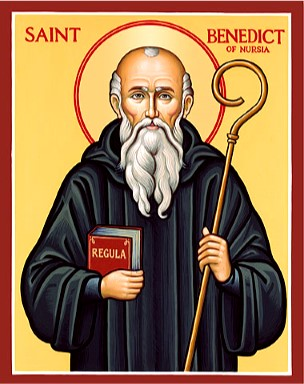 There isn’t any one single way to arrange a rule of life.  At the institutional level, our Presbyterian Book of Order does that in some respect, at least in how we govern ourselves.  It’s a way of helping us follow processes that are laid out.  It’s a way of making sure that we’re all on the same page, so to speak!

Childress notes, “Whenever there is conflict or misunderstanding—and living in close proximity to others, there always is conflict—the rule is part of the conversation among the members.  Over time the rule is often clarified or modified…  What is essential is that the rule is used in service to sharing their common life in Christ and not as a form of domination” (36).

This is an extremely important point.  If we are to follow Peter’s mandate to “love one another deeply from the heart,” the way we go about it cannot be “a form of domination.”

This might be a shock to you, but there are churches which seek to control and coerce their members!

To embrace a common life in Christ, the American church has to resist that “lone wolf” mentality that is so much a part of our culture.  One last quote from Childress: “If our people are going to live the Christ-like life, then they had better do it as a body or else they will never make it.  Lone individuals trying to live faithfully cannot stand against sin, death, the Powers, and the overwhelming pressure of society.  Church members, as individuals, are easy pickings for the Powers of Death; they will separate us, isolate us, dismember us, pick us off one at a time, and grind us down into the dust” (39).

That is an awesome statement, and I couldn’t agree more with it.

Sometimes events happen, and we are compelled to say something about it, because it’s right there in our faces.  I remember when we all heard that Osama bin Laden had been killed.  I guess like most people, I did feel a sense of relief when I heard the news. 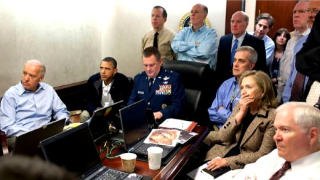 However, my real preference would have been for him to be captured and then put on trial before the entire world.  Still, I have to say that I didn’t shed any tears because he was dead.

But when I saw the images of people dancing in the street, having parties, I was saddened.  On 9-11, the terrorists were doing the exact same thing.  Imitating that kind of behavior is, in my opinion, probably the very least Christian thing we could do.  It is the most un-Christlike way to go.  I would dare say that we could see the “Powers of Death” at work.

Admittedly, it’s a difficult thing to apply Jesus’ call to love our enemies when the enemy is a mass-murderer.  It’s difficult to know what that would look like.  Still, if we would be people who love Jesus, we need to learn to love what Jesus loves.

It’s kind of like the old country gospel song, “This World is not My Home.”  “This world is not my home; I’m just a passing through / My treasures are laid up somewhere beyond the blue / The angels beckon me from heaven’s open door / And I can’t feel at home in this world anymore.”

We are living as refugees in our homeland, but we also need to remember what Psalm 24 says: “The earth is the Lord’s and all that is in it” (v. 1).

One thing that is sure; we belong to the kingdom of God and its exhibition to the world.  That’s paraphrased from the Great Ends of the Church in our Book of Order (F-1.0304).  When we commit ourselves to follow the one who leads us out of exile, we automatically invite others to join the journey.

“‘The grass withers, and the flower falls, but the word of the Lord endures forever.’  That word is the good news that was announced to you” (vv. 24-25).

That’s the good news.  When we fail, and fail we will, in that far country, in the place of our exile, the Lord fails with us, only to raise us up. 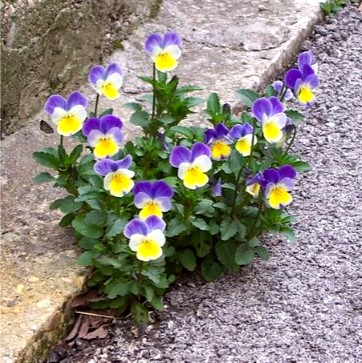 After all, even in a ditch a pansy will grow.

(“Ties that Bind: Sharing a Common Rule of Life”)

happy is the one with a rule 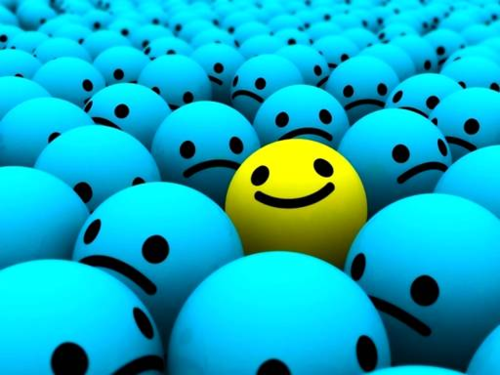 In chapter 3 of The Psalms for Today, Beth Tanner phrases the first psalm as describing “a way of life or ‘rule of life.’” (28)  This “orientation, or philosophy of life lived in God’s kingdom,” begins “Happy are those who do not follow the advice of the wicked” (NRSV), or as she translates it, “Happy is the one who does not walk among the counsel of the wicked ones.” (24)
One of the best-known rules, or rhythms, of life is the Rule of Benedict.  Dating back to the sixth century, it has endured as a flexible guide for those who would claim the designation “blessed,” or “happy.”
What does it mean to be blessed?  What does it mean to be happy?