Sometimes when I’m watching television, a commercial will come on in which the advertisers make an interesting promise. Whether it’s a business that will bake you a pizza or fix your car, this is their claim: “We treat you like family.” In fact, I think that the Olive Garden makes such a claim. I recently said to Banu, “‘Treating you like family’ is not necessarily a good thing.” I can think of plenty of people, and plenty of situations, in which being treated like family would be a bad thing—even a terrible thing! In fact, something you might avoid like the plague is being treated like family!

Something similar to that is a humorous observation about family. It’s the idea that every family has an oddball. (Some more than one!) Maybe it’s the uncle with wild conspiracy theories, like the secret army of dolphins being trained by the military in mind control. Or maybe it’s the cousin who insists on speaking with a British accent, even though she isn’t British. (I’ll let you decide if I invented these people, or if they actually exist.) But here’s the point: if you can’t think of an oddball in the family, then it’s probably you!

This is all about putting the “fun” in “dysfunctional”! The Bible is no stranger to dysfunctional families. It is filled with them, from start to finish. Genesis 25 gives us a look at one such family—the family of Isaac and Rebekah. We’ll get to the dysfunctional part in a moment, but first we have a theme that is repeated several times in the scriptures: a woman who is said to be barren.

In ancient times (and even today, in some quarters), if a couple could not conceive, it was almost always considered to be a problem with the woman. She was the soil to receive the man’s seed. And if nothing took root, then there was something wrong with the soil.

Before the invention of microscopes, the idea that some men’s seed were not very good swimmers never occurred to them! (By the way, contrary to what we now know about chromosomes, it was thought that the woman determined whether the baby would be a boy or a girl.) Along those lines, it was often thought that, with couples who could not conceive, the woman was cursed by God. She was being punished.Amazingly enough, there are still some people today who have that idea.

Accordingly, Isaac sought divine intervention for Rebekah. And guess what? It worked. They had been married for twenty years before Isaac was born. That’s a long time for people to look down on you, to make you feel like you’re worthless. Who knows what stories were passed around? Who knows what tales were told? In any event, when they find out that Rebekah is pregnant, it looks like they’re home free. This is an answer to prayer. But hold on a minute: Rebekah has a difficult pregnancy. In fact, her suffering is so great that she gets to the point of wondering if life is even worth living (v. 22).

When she does give birth, there are twin boys who are said to be struggling with each other—as if they could possibly know to do that! The first to come into the world is Esau, but Jacob is right behind him, holding onto his heel. The author of our story, looking back in time, sees this as a sign of things to come, of fighting between their descendants.

There’s something that I hope we all know—and if you don’t, you find this out pretty soon. It’s that, when you get married, you are also marrying the other person’s family. That’s something I make sure those with whom I do premarital counseling understand. In my case, I have a little bit of a buffer, since my in-laws literally live on the other side of the world! Still, my wife and I are both products of our families.

We don’t know very much about Rebekah’s family, but we have a good bit of insight into Isaac’s upbringing. I won’t go into great detail, but the son that Abraham fathers with Hagar, the servant of Sarah, becomes the focus of jealousy and contention. (Honestly, who could have foreseen such an outcome?) Ishmael is pitted against his half-brother, Isaac. There’s another problematic event in Isaac’s childhood. It happens when his father tries to kill him!

Abraham thinks God wants him to do it, but going on a camping trip, the highlight of which is the father tying the son to an altar, while brandishing a dagger, doesn’t help very much in father-son bonding! It’s probably not the best of role models in showing one’s son how to be a father. Who can say what effect this has on Isaac?

One thing we can say is that he and Rebekah play favorites with the two boys. As the scripture says, “Esau was a skillful hunter, a man of the field, while Jacob was a quiet man, living in tents. Isaac loved Esau, because he was fond of game; but Rebekah loved Jacob” (vv. 27-28).

Esau’s idea of fun would be to go out and shoot a deer, but Jacob would just as soon read a book. Esau is the outdoorsman, while Jacob is more the stay-at-home type. And based on the next paragraph, it looks like he learns a thing or two about cooking from his mother. The way it’s presented, Esau is the impulsive one; Jacob is the intentional one. One wonders how much influence his mother has had on him.

At any rate, one day Esau comes home and smells the stew that his twin brother has been whipping up. Esau blurts out, “That smells delicious! Give me some of that stuff.” He’s the older twin, so the inheritance that goes to the eldest son belongs to him. Jacob replies, “You can have it on one condition: let’s switch places and give me your birthright.”

It would seem that Esau isn’t the sharpest tool in the drawer, so to speak. But maybe he isn’t as dim-witted as the scripture portrays him. We have to admit that this is told from the perspective of Jacob, later known as Israel (32:28).

There is a certain bias at work. I think it’s fair to say that we don’t know all of Esau’s motivations. Is it possible that he is relieved to be rid of the responsibilities that go with being the elder son? Esau knows how his brother is. Could it be that this is the opportunity he’s been waiting for? 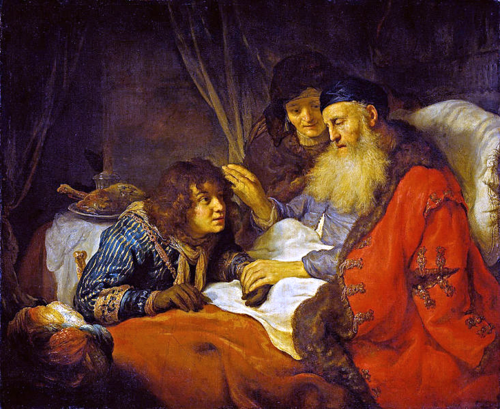 Whether or not that’s the case, how does that play into our own families? Some of us are an only child. The rest of us fall somewhere in the order of siblings. What were, and possibly still are, the expectations laid on each of us? Which of those expectations are unwanted, and on the flip side, which of those are desired? Much of life is based on things we didn’t choose; much of it is based on an accident of birth.

When we bring in the element of faith, we find out that God makes choices in the family. Isaac, rather than Ishmael, is chosen. (Though Muslims say the opposite is true.) And Jacob, rather than Esau, is chosen. Again, the author is looking back in time and seeing how things played out.

But we can still ask, on what basis is one chosen, rather than the other? It seems so arbitrary.

Aside from that, they all have their dysfunctions. None of them is deserving of blessing. One writer says, “In that all of these undeserving characters are so deeply flawed…God’s choice was clearly not based upon merit.”

This is a radical picture of grace—undeserved grace, as grace is by definition.

I have to say that I am not a fan of country music. Here’s where we get into what I just said about accident of birth and/or adoption. I was raised and loved by two people who were really into country music. When I was growing up, I was bathed in the sounds of Conway Twitty, Tammy Wynette, Charlie Pride, Merle Haggard, and Loretta Lynn, just to name a few.

But there’s one song in particular that has stayed with me. It speaks of the frequently arbitrary nature of life—the cards that we’re dealt—but also, what we do with those cards. It’s “The Gambler,” by Kenny Rogers.

To set the stage, the singer is “on a train bound for nowhere” when he is joined by the gambler, who dispenses some advice about life. The gambler says that “every hand’s a winner and every hand’s a loser.”

As the gambler has discovered, we don’t choose how we come into this world, but we do have a say in how we live in this world. Again, some decisions are made for us. We are not consulted in the matter. Some of us were dealt a lousy hand. Still, as the song says, “every hand’s a winner and every hand’s a loser.”

Having said that, there is a reality we must admit. My current hero, Richard Rohr, puts it this way in On the Threshold of Transformation:

“Have you ever met [someone] who didn’t seem comfortable in [their] own skin?… Consider the possibility that, as a child, when that person first came into the world, [they were] not given the first permission—permission to exist.

Many people have never been given this foundational permission—either spoken or unspoken. No one ever held their face, looked into their eyes, and said, 'Welcome to the world, dear little one. I’m so happy you’re here, that you exist. I love you.’”

God gives us permission to exist. Indeed, God does much more than that. We have been adopted into the family of God.

In Romans 8, Paul says that “all who are led by the Spirit of God are children of God. For you did not receive a spirit of slavery to fall back into fear, but you have received a spirit of adoption” (vv. 14-15).

Can we see how this applies to Jacob and Esau? For whatever reason—and as already mentioned, we don’t know all of his motivations—Esau rejects his birthright.

Here’s a question: what do we do with our birthright? Again, as with Esau, we haven’t chosen our birthright. Our birthright includes all of the images, the worldviews, the ways of looking at reality, even religious biases that were given to us by those who raised us.

Birthright includes the way we were shaped as children. But our adoption by God goes beyond all of that. Adoption into the family of God, through Christ, in the power of the Spirit, brings us into a new relationship—a new creation. Our birthright is transformed into something in which the old rules no longer apply. It is a new kind of family tie. As disciples of Jesus, we hear his words “that they may all be one” (Jn 17:21).