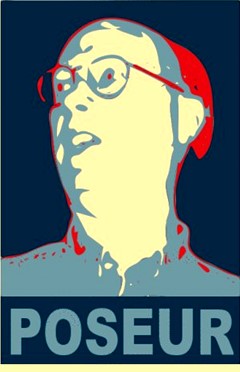 [Here's a guy so pretentious that he uses the French word. "Wait," he says, "the French word is much older, dating back to the 19th century." Someone should tell him no one likes a know-it-all.]

For decades, I have loved these verses, and like so many others, wondered in puzzlement about them.  Do they contradict each other?  Do they “speak against” each other?  Maybe it’s the nature of folly, of foolishness itself, that it resists logic.  It resists reason!  The standard explanations roughly go along these lines: first, don’t act like a fool, and second, correct a fool if need be.

I like Fred Clark’s take on it.  He says, “The point, I think, is that no matter what you do, you’re screwed—because you’re dealing with people trapped in ‘folly.’  When you’re up against folly, you can’t win.”  That’s from an article in which he cites Dietrich Bonhoeffer’s insightful essay in Letters and Papers from Prison, “After Ten Years.”

Here’s a quick quote: “Folly is a more dangerous enemy to the good than evil.  One can protest against evil; it can be unmasked and, if need be, prevented by force…  Against folly we have no defense.  Neither protests nor force can touch it; reasoning is no use; facts that contradict personal prejudices can simply be disbelieved—indeed, the fool can counter by criticizing them, and if they are undeniable, they can just be pushed aside as trivial exceptions…”  Bonhoeffer refers to the ten years after on New Year’s Day 1943.  He reflects on the previous decade and how almost every aspect of German life has been affected by the rise of Hitler and his vision.

I don’t believe we resemble 1930s and 40s Germany.  We have a different nation and a different context.  The political contexts are quite different.

When I think about our country’s current situation, my basic reaction isn’t anger or the feeling that we’ve fallen into an alternate universe.  No, it’s one of sadness.

Now it’s time for the “foolish thoughts” that prompted the title of this little piece!

I could mention myriad concerns, but one in particular is what happens at certain religious services.  (I’m sorry, political rallies).  The three-syllable chants are a primary feature.  (A good chant seems to need three syllables.  Does that give it the right meter?)  Here’s a mashup of three favorites: “Drain…her…wall.”

I’m saddened at how we have been manipulated into the plight expressed by Bonhoeffer, how “reasoning is no use; facts that contradict personal prejudices can simply be disbelieved.”  It seemingly doesn’t matter how many times we are presented with things that by objective standards, can’t possibly be true, and yet are believed—or even worse, are considered to not even be worth caring about.

We have had our worst qualities appealed to, not the ones which inspire us to be better human beings.  The delight in making fun of others has been joined with the thin-skinned inability to laugh at oneself.  Cruelty has supplanted caring and kindness.  Fear is winning the day in place of love.

But again, these are my foolish thoughts!