to see and know Christ

James Finley, the spiritual teacher and mystic, tells us “there’s a story about someone who’s in hell, and he can get out of hell if he can make the Devil cry.  What he does is he gives the Devil a mirror, and when the Devil sees himself, he cries.  And the tears of the Devil put out the fires of hell.”[1]

The epistle text for today, All Saints’ Sunday, is 1 John 3:1-3.  It speaks of pleasant stuff, but it leaves out the rest of the passage.  It leaves out the troublesome, the uncomfortable stuff.  And as I think I’ve said before, when I see those omissions in the lectionary readings, I can’t simply ignore them.  It can be too easy for us to whip out our scissors, and go, “snip, snip, snip.”  We can’t pretend those verses don’t exist.

Having said that, let’s start with the assigned verses.  “See what love the Father has given us, that we should be called children of God; and that is what we are” (v. 1a).  Love is one of the key themes in this letter and also in the gospel of John, who probably isn’t the same John we see here.

This love is not the kind we see on the Hallmark Channel.  This love is the stuff pervading the universe; it holds the cosmos together.  There’s something “quantum physical” about it.  There is also an awareness, or perhaps, pure awareness.  And it is that awareness which calls for and longs for all of us, that is, everything we are.  You know, having thought about it, the romantic love we see on the Hallmark Channel does tap into the love filling the universe.

Divine love makes us children of God, which the world doesn’t understand.  “The reason the world does not know us is that it did not know him” (v. 1b).  In the New Testament, the term “world” often has a different meaning than simply referring to planet Earth.  The “world” is a system; it’s almost like something in the air which is hostile to God and to God’s people.  It doesn’t understand—and in fact rejects, sometimes viciously—what the eyes of faith see.

I can remember a time when I made excuses (and they were excuses) for not following the path Jesus had laid out for me.  I pointed to TV evangelists who debased the gospel for the sake of fundraising.  I tried all kinds of ways to explain why church and the Christian faith weren’t for me. 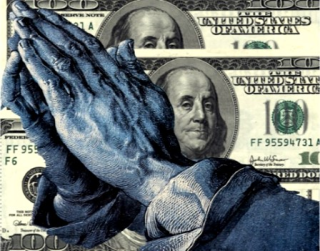 I say that in order to say this.  Like many others who have had conversions as adults, I had friends with whom I did … stuff.  And then, I started bringing up subjects about which they had very little interest.  They humored me for a while, but when we realized I was serious about it, we found our common interests fading away.  I began looking through, and appreciating for the first time in my life, the eyes of faith.

The reason the world does not know us is that it did not know him.

Here’s the first part of verse 2: “Beloved, we are God’s children now; what we will be has not yet been revealed.”  I like how Eugene Peterson translates it in The Message.  “But friends, that’s exactly who we are: children of God.  And that’s only the beginning.  Who knows how we’ll end up!”

I imagine many of us can relate to that.  Who knows how we’ll end up?  We are still on the way.

Here’s what John says about it.  “What we do know is this: when he is revealed, we will be like him, for we will see him as he is” (v. 2b).  And again, Peterson: “What we know is that when Christ is openly revealed, we’ll see him—and in seeing him, become like him.”

So we’re back to this business of seeing.  It’s the devil peeking into the mirror and recoiling in terror.  Is it the utter lack of love which causes such fright and bitter disappointment?

I said earlier the lectionary leaves out verses 4 to 10.  Maybe we can understand why.  When we read stuff like, “No one who abides in him sins,” “Everyone who commits sin is a child of the devil,” and “Those who have been born of God do not sin,” we might be excused for taking a moment of pause (vv. 6, 8, 9).

One writer, reflecting on this message, concludes it is “a disquieting thought.”[2]  Disquieting indeed.  It’s almost like joining the devil with that peek in the mirror.  Horrifying!

Some of those folks I mentioned say being set free from sin’s power equates to not sinning.  Some people say it’s possible to be sanctified enough so that you never sin.  There are some who claim to have arrived at that point.  They will tell you, “I do not sin anymore.”

However, there is a slight problem.  Remember our call to confession today.  “If we say we have no sin, we deceive ourselves and the truth is not in us.  But if we confess our sins, God who is faithful and just will forgive us our sins and cleanse us from all unrighteousness.”  That’s from chapter 1 of today’s letter (vv. 8-9).

Being set free from sin’s power unfortunately does not mean we no longer sin.  Our sin is a sign of our weakness.  For some strange, bizarre reason, we keep holding on the power of sin.  We’re extremely reluctant to have those chains broken!  That’s why salvation is an ongoing process. 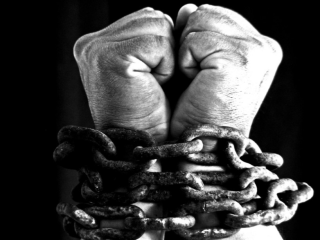 Still, as much as we would like to, we can’t ignore the verses setting up a zero-tolerance philosophy.

Consider the last part of verse 6, referring to Christ: “no one who sins has either seen him or known him.”  That seems to be an open and shut case!  Again, here’s Peterson.  “No one who lives deeply in Christ makes a practice of sin.  None of those who do practice sin have taken a good look at Christ.  They’ve got him all backward.”

The idea here is we’re looking at habitual sin—sin in which we constantly indulge.

I want to ask something I would guess you’ve never heard in a sermon.  Do we worship the devil?  (Granted, that’s not a typical All Saints’ Day question!)  In posing that question, I’m not talking about offering a slain goat as sacrifice, while uttering incantations.  It’s something a little more nuanced.

We can think of the devil as lord of this world, with the meaning of “world” as that which is impermanent, illusionary, counterfeit—promising something we already have.  Do we foolishly hold on to that? 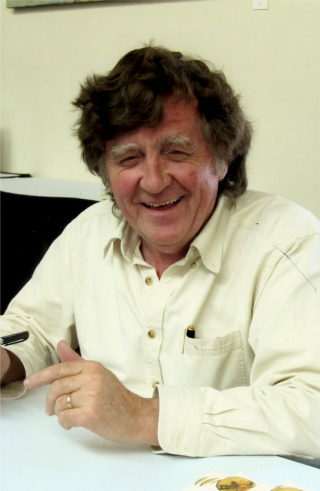 But we need help in doing that.  All by ourselves, we can’t let the love flow.

Someone I really like is the priest and paleontologist, Pierre Teilhard de Chardin, who lived in the first half of the 20th century.  He saw love at literally the heart of all things.  Here’s a prayer in which he confesses his failure to love:

“My God, I admit that for a long time I have been and still am [regrettably], unwilling to love my neighbor…  My God, make it so that I reflect your face to the lives of others…  Jesus, Savior of human activity, to whom you bring a reason to act, Savior of human suffering to whom you bring a value to life, be the salvation of human unity by forcing us to abandon our smallness and, with your support, to venture out onto the unknown ocean of charity,” the unknown ocean of love.[4]

How do we go with the flow of love?  What are ways in which we’re unloving?  On this All Saints’ Sunday, what can we learn from those who’ve gone before?  Is there anyone who comes to mind who’s been a source of that wisdom, someone who has seen and known Christ?

God even loves children of the devil, we who are saints and sinners.

Here’s James Finley again, who says, “imagine your issues: you have a temper, all your life you struggle with your temper, and your last act on this earth is, you throw a bedpan and you die.  So you say: this is regrettable.  And it is regrettable, because you could hit somebody.  And you’re hoping for a better exit.  But the mystical insight is that God loves people who throw bedpans.  God loves people who don’t.”[5]

“We are traveling in the footsteps / Of those who’ve gone before / But we’ll all be reunited / On a new and sunlit shore. 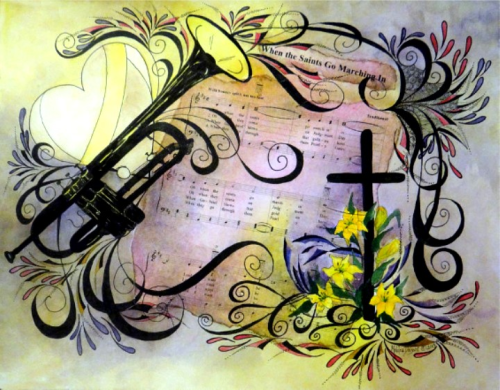 “When the Saints Go Marching In” by Melda Driscoll

In November 1926, during his time in China doing paleontological work, Pierre Teilhard de Chardin speaks of a decision that appears in Letters from a Traveller (published posthumously).

“I have finally decided to write my book on the spiritual life.  I mean to put down as simply as possible the sort of ascetical or mystical teaching that I have been living and preaching so long.  I call it Le Milieu divin [The Divine Milieu], but I am being careful to include nothing esoteric and the minimum of explicit philosophy.  What I intend to do is to confine myself to the realm of a moral attitude, vigorously presented but still incontestably Christian.  I really mean to ‘get across’ and have the book read.  I think that if I could manage to get it printed, it would do good in two ways: it would spread ideas which I believe might open new frontiers for many minds, and at the same time my efforts might be rewarded by some sort of approval from the Church. 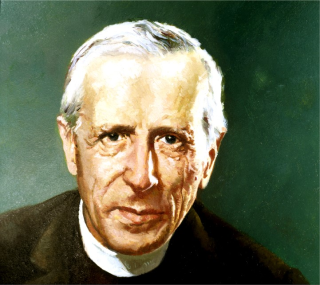 “I have settled down to my little book.  I want to write it slowly, quietly—living it and meditating on it like a prayer.” (133-4)

I recently re-read The Divine Milieu, already having done so several years ago.  It truly is a fascinating work.  Unfortunately, contrary to Teilhard’s wishes that he does nothing “esoteric,” I, like so many others, found his sometimes innovative terminology rather inscrutable.  Over time, the deep meaning within has opened up like a flower—or like a flame which gradually illuminates dark recesses.

His expressed dual hope yielded fruit in unexpected ways.  His book (and other works) did indeed “open new frontiers for many minds.”  However, it was that very fact that prevented being “rewarded by some sort of approval from the Church.”  There was serious doubt that his thinking was “incontestably Christian.”  The Vatican denied permission for him to teach theology, instead, limiting him to his scientific work.  In some way, he seemed to welcome that decision.  At least he had the freedom to devote more of his life to his research.

Perhaps it had to be that way.  It was only in the years after his death on Easter in 1955 that those frontiers for many minds began to engage, not with fear and suspicion, but with joy and admiration.

I want to close with an excerpt from a prayer in The Divine Milieu: (146)

“…No, you do not ask anything false or unattainable of me.  You merely, through your revelation and your grace, force what is most human in me to become conscious of itself at last.  Humanity was sleeping—it is still sleeping—imprisoned in the narrow joys of its little closed loves…

May we all venture into that uncharted ocean.