come and go the horsemen

The four horsemen of the apocalypse.

Just hearing those words conjures up all kinds of frightening images of a world laid waste—and the vicious struggle for survival in the aftermath. Possibly no single aspect of the book of Revelation has been subjected to more “freewheeling imagination,” as Metzger puts it in Breaking the Code, than this. (11) Wait…who am I kidding? The number of the beast has them all beat! (But we’ll deal with that when the time comes.)

Who are these horsemen? At the beginning of Revelation 6, they appear when the Lamb opens the first four seals of the scroll.

In his book Apocalypse, Pablo Richard contradicts Metzger’s claim that the seven seals, seven trumpets, and seven bowls “essentially tell the same thing.” (56) Richard says instead, “In those passages (trumpets and bowls) we find successive plagues against the Roman empire, whereas here the seals present the oppression of the empire over the people and the community.” (68) Serious, clear-eyed commentators come to different conclusions—let alone the crazy, wild-eyed ones!

Speaking of the first horseman, who comes out “conquering and to conquer,” Richard notes, “This is the first and most terrible thing about the empire: it is a victorious empire that continues to enjoy victory. Such is the tragic reality for those oppressed by the empire. John, however, makes a critical observation: the empire is victorious like the barbarians (the rider is carrying a bow), and its victory is ultimately the victory of political violence (red horse), economic oppression (black horse), and death (pale green horse).” (69) 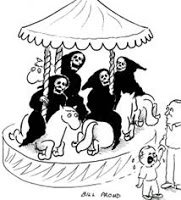 Without making too easy an analogy, I think it’s safe to say that, just as Christ and Caesar still vie for our worship, so the values of empire still tempt us. Can we see that at work in our own lives and in the life of our community?