Recently, I returned from a conflict mediation training event hosted by the Synod of the Northeast of the Presbyterian Church (USA).  I won’t pretend to give you a synopsis of the entire week—partly because my brain is still trying to decode the stuff that was fed into it.

But I do want to introduce a little of the stuff we did in today’s sermon.  I want to use the story of the tower of Babel in Genesis 11, with its confusion of languages, and the story of Pentecost in Acts 2, with its speaking in tongues, as an arena of conflict (and perhaps conflict resolution).

One thing we did I would like to mention was looking at how we manage differences.  That is, a little more strongly, how do we deal with disagreements?

Of course, there are plenty of ways to look at it.  One was a self-assessment that deals with several scenarios of different, and often competing, viewpoints.  It looks at the way we typically deal with those situations.

Very quickly, the inventory has four categories.  One is Accommodating / Harmonizing.  This approach values peace and harmony above all else.  Being sociable is very important.  Concern for the feelings of other people is high on the list.  A motto for this one might be, “You can catch more flies with honey than with vinegar.”

Another one is Achieving / Directing.  These are the go-getters, the ones who take the initiative and dive in.  These are the risk takers.  This one’s motto could be “nothing ventured, nothing gained.”

Then we have Affiliating / Perfecting.  This one puts a great emphasis on relationship.  Being team oriented is very important.  A pursuit of excellence is highly valued.  This might be a fitting motto: “If it’s worth doing, it’s worth doing well!”

Finally, there is Analyzing / Preserving.  This approach values gathering information.  Very important is a chance to think things through and not be pressured to make a snap decision.  “Look before you leap!” might be appropriate here.

This is the category I scored the highest in.  I think it speaks to the comment I made earlier about my brain trying to decode what was put into it.  (Give me a break.  I haven’t had enough time!)  One problem with this approach is “analysis paralysis.”  (Hey, I first got to get this stuff worked out!)

In reality, we use all of these approaches when dealing with differences, when dealing with conflict.  It’s just that we’re built—we are hardwired—to favor one or two over the others.  We have to stretch ourselves to operate in ways we would rather not.  Some people are better at stretching themselves than others.  I really have to work at it.  I can stubbornly insist on my own way, even if God is calling me to be more.

As today’s prayer of confession says (it being Pentecost), “We confess that we hold back the force of your Spirit among us.”  That easily becomes my prayer! 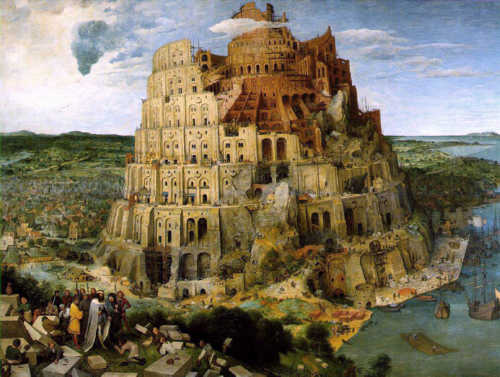 There’s a certain group of people who are holding back the force of God’s spirit among themselves.  These guys are the builders of the tower of Babel.

Some see this mythical story as explaining how the human race developed many different languages.  That’s part of the mix at the surface level, but there’s so much more to it.  As today’s declaration of forgiveness says, “God confused the language of all the earth to keep the people from idolatry.”

Genesis 11 begins, “Now the whole earth had one language and the same words.”  One language and the same words.  That goes beyond the sounds that come out of our mouths.  More importantly, that also can apply to various viewpoints, to different ways of looking at the world.  If everyone speaks the same words, the difficulties of disagreement are ignored, even repressed.  The danger of groupthink sets in.  People are “encouraged” to think the same way, to have their values dictated to them.  That becomes an idol.

What actually happens in the story?

The people migrate to the land of Shinar, which is in modern-day Iraq.  A decision is made to build bricks and use them to construct a city.  They begin work on a tower.  It’s probably what was known as a ziggurat, which looked like a pyramid.  Last week, in my sermon on Revelation, I mentioned “a palace that was a city”—the joyful grandeur of what a city can and should be, looking to the New Jerusalem that descends to earth.

Maybe that’s what these people are about: getting into the palace building business.

So things are going along; deadlines are being met.  The chamber of commerce is rolling out the red carpet for tourism and hosting conventions.  But hold on a minute!  With verse 5, things take a sudden turn.

“The Lord came down to see the city and the tower, which mortals had built.  And the Lord said, ‘Look, they are one people, and they have all one language; and this is only the beginning of what they will do; nothing that they propose to do will now be impossible for them.  Come, let us go down, and confuse their language there, so that they will not understand one another’s speech.’  So the Lord scattered them abroad from there over the face of all the earth, and they left off building the city” (vv. 5-8).

What is the deal?  Why is God being such a party pooper?  Why is the Lord throwing a monkey wrench into the works?  “This is just the start.  Nothing can stop them now!”  It sounds like God is scared!

A few moments ago, I mentioned the idea that having one language and the same words has turned into an idol.  But does that necessarily have to be the case?  What’s wrong with everyone understanding each other?  Doesn’t that help foster unity?

Having said that, can we see the Lord’s act of confusing the people’s language and scattering them throughout the earth as something other than punishment?  Can we see this as an act of love and grace?

Remember the story of creation.  God creates the universe by making a difference!  Light and darkness, day and night, earth and sea, and so on.

Our friend Nancy continues, “Look around us; consider our world.  We’ve done a pretty good job of fulfilling the creation command.  But we have also, over the millennia, done a very good job of creating our own towers—towers of isolation.  It is easier to be around ‘our own kind,’ those who speak our language, share our history, act and react as we do.  But our towers are no different from the tower of our ancestors in the faith.”

Like those builders in Genesis 11, we also often act as though our differences and disagreements are somehow a flaw in God’s design.  We act as though conflict is not normal. 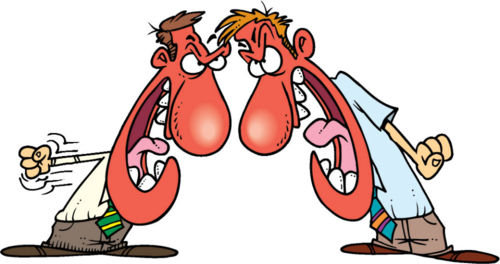 One of the first things we did at the mediation training was to look at this idea of conflict.  The presenter asked us what images come to mind when we hear the word “conflict.”  I think all of the answers pictured conflict as something undesirable, even sinful.  My response was “red faces.”

Conflict is normal.  Without conflict, life itself is impossible.  Without conflict, there wouldn’t be a food chain.  Without conflict, human innovation would be close to nonexistent.  So it’s not a question of conflict being good or bad, it’s what we do with it, how we deal with it.  That partly goes back to those categories I mentioned earlier—the ones with the different mottos.

Here’s a good one on conflict: what is God saying to us in the midst of it?  Admittedly, that’s a tough one to keep in mind when anxiety kicks in.  Let’s not forget: Jesus engaged in plenty of conflict!

Looking back at God’s scattering the people and confusing their language, this is being done to save them from themselves.  This “tower with its top in the heavens” is the perfect example of human technology gone adrift.  Here, it’s a rejection of the joyous, divinely created diversity that is there, if we have the eyes to see it.

Looking ahead to the day of Pentecost in Acts 2, we see another case of confusion of language.  But there’s something different here.  Instead of people making a name for themselves, we have people inspired by the Holy Spirit, praising the name above all names.

We have folks from all over the Roman Empire, and places to the east, who have no earthly idea what the others are saying.  It looks nuts.  Some of those watching all of this decide, “There’s no other way to explain it.  All of these people are drunk as a skunk.”  That’s the cue for St. Peter, apostle of Jesus Christ, to explain that this was the vision of Joel the prophet.

Some confusing cooperation is going on.

Peter talks about the Spirit being poured out on all manner of people, all sorts of shapes and sizes and colors and languages.  Creation itself is in turmoil.  But those who call on the name of the Lord find salvation.  They find liberation and reconciliation during conflict.

The faithful people of God, sisters and brothers of Jesus Christ, are called to listen beyond the confusion of tongues.  We need not build towers to make a name for ourselves.

On the day of Pentecost, the Spirit doesn’t diminish the diversity among the nationalities, the ethnic groups.  Those groups include both friends and foes.  Instead, the Spirit works through and with them.  Remember the student and the rabbi!  God is the author of difference, diversity, and dare we say, of conflict.

One more note from deClaissé-Walford.  “Diversity, differences between me and you, between us and the members of our families, between us and others in our faith communities is something to be welcomed, honored and celebrated…  If we do not, cannot, will not acknowledge our differences and live and work together in our diversity, then we commit the same sin of fear as the original ‘tower builders.’”[2]

The Spirit who tumbled the tower builders’ plans is the same Spirit who on Pentecost orchestrated the clamor of confusion into a concert of cooperation.  That same Spirit is here to bring composure within the conflict in our own lives.