It can be easy to think you’re hearing from God.  I suppose there are those who don’t believe they make much of an effort to do so.  However, I would contend that even the most hard-hearted, seemingly oblivious person still has within them the spark, the hidden desire, to make that connection.  It’s how we’re built.  We all are created in the image of God.

Now, as for those of us who have at least some interest in hearing a word from the Lord, as I suggested, it can be a tricky thing.  That divine voice, spoken in silence through the scriptures, through prayer, through each other, through life itself, is not always apparent.

Those who hear audible voices in their head might need to get some therapeutic help!

We can see the difficulty in 2 Chronicles 18.  We begin with King Jehoshaphat of Judah and King Ahab of Israel.  Quick note: after Solomon’s death, there was a division of kingdoms, with Israel in the north and Judah in the south.  It’s enough to make you say, “Jumping Jehoshaphat!”

(We should note Jehoshaphat was not known for his program of calisthenics.  He was not hawking videos of “Sweatin’ with Jehoshaphat.”  “Jumping Jehoshaphat!” is just a nice way to swear.)

Jehoshaphat is considered one of the “good” kings in the Bible.  He had a few flaws—the events of this chapter testify to one—but basically, he was a faithful leader.  He was concerned with following the ways of Yahweh, the Lord.  In chapter 20, the enemies of Judah are planning war against them.  Jehoshaphat calls the people to a time of fasting.  Their enemies get confused and they turn on each other, and Judah is saved.

But that’s in the future.  Right now, he has been blessed with wealth and honor.  Unfortunately, he enters into a marriage alliance with Ahab, who the scriptures describe as a rather notorious fellow.  He is one of the “bad” kings.  Jehoshaphat’s son is wedded to Ahab’s daughter—not exactly a match made in heaven.

Ahab has a proposal for Jehoshaphat.  This time, it has nothing to do with marriage!  He wants to reclaim Ramoth-gilead, which had long been part of Israel, but had been taken by the Arameans (later known as Syrians).  On the face of it, he would seem to be justified.  He invites Jehoshaphat to join him in the fight.  He accepts the invitation, but then thinks, “Maybe I’m being too hasty.  We need to seek the Lord on this.” 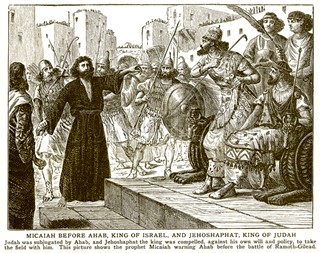 Ahab gathers together four hundred prophets, and they give him the green light.  “Go up; for God will give it into the hand of the king” (v. 5).  Well, that settles that!  However, Jehoshaphat still has his doubts.  Apparently, four hundred prophets all saying the same thing—agreeing with Ahab’s plan—arouse his suspicion.  Isn’t there someone else to consult?  There are always two sides to every story, often more than two.

Oh yes, there’s the prophet Micaiah.  But Ahab adds, “I hate the guy.  He never says what I want to hear.”  In any event, he sends someone to retrieve the prophet, who explains to Micaiah the king’s policy and who warns the prophet against dissenting, that is, if he wants to stay healthy.

“Okay, that’s fine.  As long as the Lord gives the thumbs-up, we’re cool.”  In the meantime, the two kings have arrayed themselves with pomp and circumstance.  Micaiah shows up and says, “Reporting as ordered.”  Ahab puts the question to him, and he reports as ordered.  He mindlessly repeats the party line.

The king knows he isn’t being truthful, and he chastises him.  Then Micaiah lets everyone know why Ahab hates him.  “I saw all Israel scattered on the mountains,” the prophet declares, “like sheep without a shepherd; and the Lord said, ‘These have no master; let each one go home in peace’” (v. 16).  In other words, if you pursue this fool’s errand, you won’t escape with your life.  Your troops will have no leader.

Ahab turns to Jehoshaphat and says, “See what I mean?  I told you so!”

Here’s where we get back to Jehoshaphat having reservations.  He surely knows the prophet is speaking the word of the Lord.  Doesn’t he?  Is it possible he has convinced himself he’s doing the right thing?  Has he been swayed by all the other prophets?

How often do we go against our better judgment?  Something is telling us, “Don’t do this.  You will regret it.”  But we go ahead anyway!  On the flip side, we might sense that we should do something, but we stand aside and don’t get involved.

Meanwhile, Micaiah has some explaining to do.  He speaks of a vision of being in the throne room of God, who wonders how Ahab can be lured into pursuing this disastrous course of action.  A spirit (an angel?) steps forward and says, “I will trick him.”  Micaiah says all the prophets are following a lie, not the Lord.

This brings up a problem that appears on occasion in the Bible.  Does God force people to do the wrong thing?  We see it famously portrayed in Exodus when the Pharaoh hardens his heart and won’t allow the Hebrews to leave Egypt.  Still, there are two sides to that coin.  We see times when it is in fact God who is doing the hardening of his heart (Ex 9:12, 10:20, 27).  What’s that all about?

There isn’t any one easy answer, but we can imagine someone whose mind and heart are completely closed, like an iron gate slammed shut—one who is dead set on their intention.  It is conceivable to picture God honoring that decision, so to speak.  The person will get a nudge in that direction.  Still, repentance is always possible. 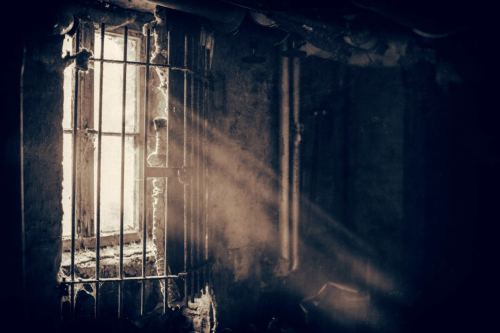 photo by Denny Müller at Unsplash

Whatever the case, for his trouble in delivering the message, Micaiah gets smacked in the face.  And then things really go south.

The prophet is treated like an enemy of the state.  The king orders him to be taken into custody and thrown in jail.  There’s a prison cell with his name on it.  He is to be fed what amounts to little more than a starvation diet.  He winds up defying the king’s orders, speaking against the state.  Ahab decrees that Micaiah is to remain under lock and key until he returns safe and sound.

He has one last word for the king.  If Ahab does return in one piece, then Micaiah will admit he hasn’t heard from the Lord.  He wants everyone to understand.  “Hear, you peoples, all of you!” (v. 27).  And that’s it for him.  We don’t know what becomes of Micaiah.  Unfortunately for Ahab, we do know what becomes of him.  Quickly, here is the conclusion.

He’s not quite ready to meet the grim reaper, so he goes undercover.  Ahab dresses like an ordinary soldier; he’s not wearing his kingly garb.  He doesn’t want to draw any attention.  He doesn’t want someone zeroing in on him.  However, as fate would have it, Ahab is struck by a random arrow which finds a gap in his armor, and he bleeds out.

It turned out Micaiah had listened to the Lord.  He had heard the divine word.

When the four hundred prophets are proclaiming their message, it can seem like they’re speaking with the very voice of God.  Who would dare disregard it?  When the whole society is saying one thing, it might take bravery—or bravado—to go your own way.

Listening to God involves listening with the ear of the heart.  The ear of our heart can be seen as the most vital thing about us.  If we never listen to it, then our entire life becomes tone deaf. 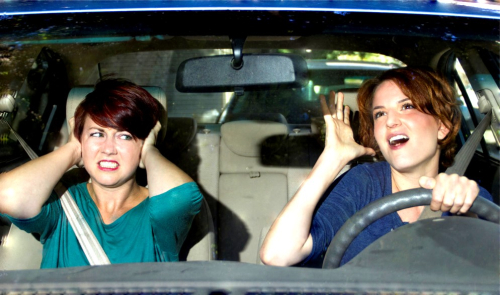 By not listening to the word of God, by not dreaming new beginnings, we make ourselves slaves to a past gone by; we hamstring our future with limited possibilities.

A big part of hearing, a big part of listening, is allowing questions.  When we mindlessly quote the authorities, when we do not make room for questions, we indeed harden our hearts.  We don’t listen with them.  We ignore that still, small voice within.

What good would Micaiah be today?  Would we hate him?  Would he say stuff we don’t want to hear?

We have to be careful, lest the church follow a growing trend in which questions are suppressed—when we’re chastised for asking.  Actually, I think we can agree that the church is often the worst of all when it comes to shaming and erecting walls.  Following Jesus means asking questions.  He surely puts questions to us!  When he was asked, “Who is my neighbor?”, he responded with the parable of the Good Samaritan.  Jesus then asked, “Who was a neighbor to the man left for dead?”  The answer: the one who showed mercy.  He asks tough questions.

One of my mom’s many sayings when I was a kid was, “You and God make a majority.”  When we encounter situations in which the score is 400 to 1, may we humbly hold on to the truth that’s been shown us.  Without question.