The reporting on Megyn Kelly’s interview with Donald Trump last Tuesday has largely focused on Trump’s abusive remarks about women and Kelly herself.  His referring to her as a “bimbo” has made the headlines.  The Trump vs. Kelly narrative was completely overblown and ridiculous.  That overemphasis missed the most revealing parts of the interview. 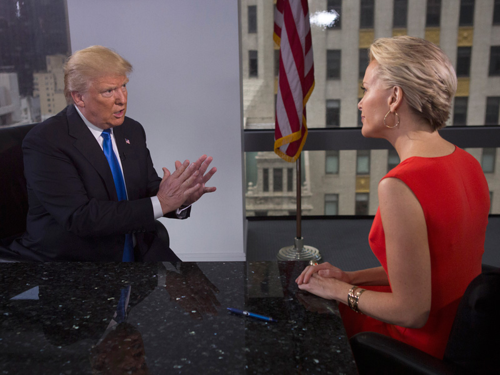 For example, when Kelly asked Trump if anyone has ever hurt him emotionally, he started talking about his alcoholic brother who died.  When he tried to turn the subject to a discussion about alcoholism, Kelly brought him back to her point.  He was reticent to answer, saying that he would have to think about it.  But he did come up with this: “When I’m wounded, I go after people hard, okay?  And I try and ‘un-wound’ myself.”  That’s the definition of a bully.  He said that he responds based on “what they did to me.”

“If we do not transform our pain, we will most assuredly transmit it.”  Some words of wisdom from Richard Rohr.  I’m hardly a fan of Trump’s, but I can see how his bullying attitude comes from a deep sense of lack of self-worth. (Perhaps self-hatred?)  He brags because he feels unworthy inside.  I’m not seeking to justify, just seeking to explain.  That acting out of fear and pain is common to us all.  Those who don’t admit that and don’t seek to address it make for poor leaders, be they president, pastor, or parent.

Okay, now I will remove my therapist hat!