Jonah, where is the love?

I said a couple of weeks ago that sometimes events happen during the week that must be addressed on Sunday.  Sometimes it works in reverse.  On Wednesday, Inauguration Day took place in an atmosphere of a, let’s say, rather argumentative transfer of power.  And look at who’s featured in today’s Old Testament reading.  It’s none other than that argumentative prophet, Jonah.  I don’t think he set out to be a curmudgeon, but that’s how he wound up.

I will connect the dots between Inauguration Day and Jonah in a few moments.

Those who know nothing else about him remember that he’s the guy who got swallowed by a fish.  (Or was it a whale?  Whales aren’t fish!)

Of the few memories I have from my brief attendance at Sunday school when I was a kid, one is of the story of Jonah.  (I didn’t start going to church in earnest until I was in my twenties.)

Our teacher, a nice old lady named Mrs. Williams, was fond of using those images that cling to a felt backboard.  Seeing the figures of the prophet and the whale floating on that two-dimensional sea of felt inspired all kinds of questions within me.  How could Jonah possibly survive inside that creature?  He was there for three days and three nights!  How could he breathe?  Why didn’t the animal’s digestive juices go to work on him?

It really doesn’t work to just talk about chapter 3 without telling the rest of the story.  And what a story it is!

The book of Jonah has plenty of satire.  There are numerous places where the humor breaks through.  If you want a story filled with zany and sarcastic images, this is the one for you.  The first word of the book in Hebrew (וַיְהׅי, vayehi) means “and it happened.”  Once upon a time.

The Lord wants Jonah to go to Nineveh and warn the people to turn from their wicked ways.  Something to understand about Nineveh is that it is a bitter enemy of Israel.  It might be the least likely place Jonah would want to visit.  He buys his ticket, but it’s for a ship sailing in the opposite direction.  It’s headed for Tarshish.  It’s thought to have been a city in modern-day Spain, at the other end of the Mediterranean.

So basically, God tells him to go to one place, and he heads off for the other side of the world.

Very briefly, a storm breaks out, and the sailors are doing their best to handle it.  While the tempest is raging, Jonah is down below snoozing; he’s taking a nap.  They wake him up, and he winds up telling the crew to throw him into the sea, and the storm will cease.  Jonah is ready to die.  Anything is better than setting foot in that horrible city.  Even spending time in a fishy gullet beats it!

Jesus speaks of the sign of Jonah (Mt 12:38-41).  He sees himself in Jonah’s three-day tour of the deep.  The ancient Hebrews spoke of Leviathan, the great sea monster dwelling in the watery depths.  Jonah prays, “out of the belly of Sheol I cried” (2:2).  This is a picture of death.  When that critter upchucks the prophet—that must have been a serious case of indigestion—Jonah, figuratively, goes from death to life.  And just as Jonah emerges from the grave, so does Jesus.

I’ll jump ahead to chapter 4, which is after we find out his message has done its job.

This is not what Jonah wanted.  He was hoping they’d shake his hand, say “nice sermon,” and then go right back to their deliciously evil stuff.  Unlike Abraham, who didn’t want Sodom destroyed, Jonah’s already got a spot in mind with a good view of the city.  He’ll set up his lawn chair, kick back, and get ready to watch the fire fall!  Okay Lord, smite them, O mighty smiter!

Unfortunately for Jonah, God has the best interests of the city in mind, and Nineveh is spared.  This is where we’re treated to some of that argumentative character I mentioned at the beginning.  In verse 1, the Hebrew word for “displeased” appears twice, and the word for “angry” (חׇרׇה, charah) literally means “hot,” “to burn.”  One might say Jonah is blazing with fury.

Here’s where I connect some of the dots between Inauguration Day and Jonah.  He would rather die than have things work out for the Ninevites.  Does that sound familiar?  When we watch the news networks, when we peruse social media, it seems like it would kill some people to say something good about “the others.”  I would rather die than give them a thumbs-up! 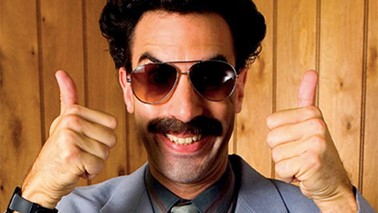 As for Nineveh, things work out so well that when the king hears Jonah’s message, he not only repents but he also issues a decree.  “No human being or animal, no herd or flock, shall taste anything.  They shall not feed, nor shall they drink water.  Human beings and animals shall be covered with sackcloth, and they shall cry mightily to God.  All shall turn from their evil ways and from the violence that is in their hands” (3:7-8).

Even the animals have to repent!

Maybe it’s clear by now that Jonah is a bundle of contradictions.  He senses his God-given duty, but he fights like the devil against it.  He sets off on the longest journey he possibly can and finds himself back at square one.  The thing that he believed would destroy him becomes the vehicle of his deliverance.  The message of the grace and forgiveness of the Lord becomes in him an occasion for anger and bigotry.

Jonah almost literally has to be dragged kicking and screaming to do his job.  He’s successful in his God-given task, and you better believe, he’s mad as a wet hen about it!  And yet Jesus sees in Jonah a lesson for others.  That’s the power of grace in action.

Maybe we can see in Jonah the contradictions in all of us.  Indeed, even as the book is drawing to a close, Jonah still has his priorities messed up.  He’s upset because the plant that gave him shade from the hot sun has dried up, but he couldn’t care less what happens to the people in the city.

There is another connection between Inauguration Day and Jonah, and it’s a contrast, thanks to Amanda Gorman.  At 22, she is the youngest poet in US history to appear at an inaugural event.  Her poem, “The Hill We Climb,” begins with these words: “When day comes, we ask ourselves, where can we find light in this never-ending shade? / The loss we carry. A sea we must wade. / We braved the belly of the beast.” [1]  Maybe Jonah can relate to that. 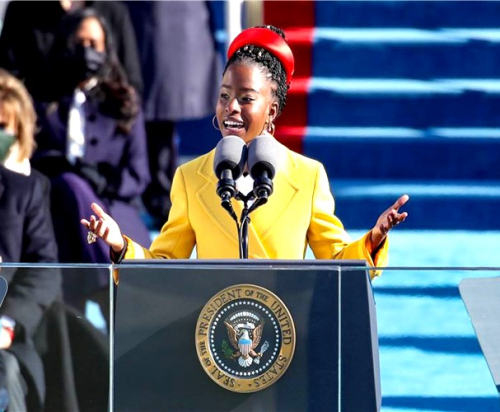 She also references words from the prophet Micah.  Speaking of the vision of the Lord’s embrace of all peoples, we hear, “they shall all sit under their own vines and under their own fig trees, and no one shall make them afraid; for the mouth of the Lord of hosts has spoken” (Mi 4:4).  Vines and fig trees are signs of prosperity.

What a contrast.  Micah speaks of hope and courage, and Jonah sits under a bush, stewing with anger!

Still, we hear the words of Jesus.  “You have heard that it was said, ‘You shall love your neighbor and hate your enemy.’  But I say to you, Love your enemies and pray for those who persecute you” (Mt 5:43-44).  Inauguration Day was four days ago.  How are we doing with loving our enemies?  Must we regard each other as enemies?

(By the way, the last verse in that passage, verse 48, has created plenty of confusion.  “Be perfect, therefore, as your heavenly Father is perfect.”  The word “perfect” doesn’t mean “flawless.”  Rather, it means “complete.”  Jesus is saying we are to be completed, we are to be perfected.  In the same way, the US Constitution’s “a more perfect union” doesn’t mean a flawless union.  If that’s the case, Lord help us!)

Now, back to love!  Danielle Kingstrom speaks about love, saying, “Love is…not an easy phenomenon to engage.  It comes out of nowhere and rams into you like a semi-truck on the freeway.  It smashes all your senses and discombobulates your reason.  Of course, people are afraid of it!  It’s an explosion of accident and attention all at once.  What the heck do we do with energy like that when it surges?”[2]

Here’s a lesson for Jonah, and here’s a lesson for us.  She adds, “Love doesn’t have to decide what to ‘do’ about certain groups of people until love is face to face with the person.”  We can be face to face with people in a way that exudes disgust and disdain and dread.  So Jonah, where is the love?  (The Black-Eyed Peas asked that same question.)

“Love is like a mirror…  It shows you where you need to grow…  The thistles and thorns will stick us—it’s challenging to see a reflection of ourselves that we hadn’t expected.  But love is unexpected like that.”  It’s so easy to simply dismiss someone as lacking comprehension or lacking character.

And here’s a crazy thought: even if we hang on to those attitudes, even if we still look on them as enemies—even if we’re still not yet ready to make that step toward freedom—we come right back around to Jesus.  Love ‘em anyway!  Let’s take the actions, and refrain from the actions, that make life harder for them.  We don’t have to wait until bad stuff happens to us.  We can help each other walk a silver, if not a golden, path on this planet.

It’s like the question God poses to Jonah at the very end of the book.  “And should I not be concerned about Nineveh, that great city, in which there are more than a hundred and twenty thousand persons who do not know their right hand from their left, and also many animals?” (4:11).  I like the way the natural order is included in God’s concern.

Jonah doesn’t answer the question.  At least, we’re not told the answer.  What is our answer?

As we enter a new political landscape (and they do come and go), let’s learn a lesson from Jonah—and from Jesus.  When we love our enemies, we must first deal with the enemy within.  (I need to learn this as much as anyone else.)  To the extent we have division and fear inside ourselves, we project division and fear outside into the world. 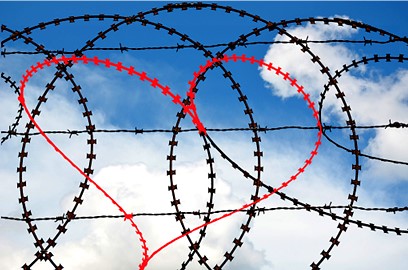 Let’s love our neighbor and love our enemy.  Who knows?  We might find they’re one and the same!