However we spin it, he’s talking about some pretty weighty stuff.  (Shakespeare’s characters tend to do that!)  He’s also talking about some stuff that we don’t easily address.  A lot of it is thought to be too dark and depressing, and we tread lightly—sometimes too lightly.

Among the things posted on the prayer website Sacred Space are thoughts for the week, things to help guide prayer.  One of the things that has appeared deals with a topic that is one of those uncomfortable subjects:  death.

According to the prayer guide, “Of the many ways to die alone, the most comfortless and solitary is when family and friends conspire to deny the approach of death.  They may feel, ‘I couldn’t take away her hope.’  But without acceptance of the truth, they remove the possibility of spiritual companionship at the end.”[1]

We’re told that in his book, How We Die, Sherwin Nuland “remembers with regret how the family conspired to avoid the truth when his beloved Aunt Rose was dying.  ‘We knew—she knew—we knew she knew—she knew we knew—and none of us would talk about it when we were all together.  We kept up the charade to the end.  Aunt Rose was deprived, and so were we, of the coming together that should have been, when we might finally tell her what her life had given us.  In this sense, my Aunt Rose died alone.’”

I think there’s a parallel between how we often speak of death, and in a broader sense, of lamentation, expression of grief, in general.

That’s also demonstrated in the worship of the church.  The compilers of the Revised Common Lectionary tend to exclude the “problematic” verses from scripture passages.  For example, there’s the reading from 1 Kings in which Solomon asks God for wisdom (3:3-14).  What gets skipped over (verses 1 and 2) is his marriage to the Pharaoh’s daughter to form an alliance with Egypt.  That might be controversial!

In the same way, there are certain psalms that appear nowhere in the lectionary for Sunday worship.  Hint:  Psalm 88 is one of them.  Listening to that litany of doom and gloom, we might well understand why it was omitted.  Saying, “The word of the Lord.  Thanks be to God!” might seem a bit awkward.

Beth Tanner’s book, The Psalms for Today, is a guide in studying the psalms.[2]  Her chapter, “Living in a Broken World,” focuses on Psalm 13, which also has some of that doom and gloom.

Tanner says about this psalm, “There are none of the nice salutations contained in the [Presbyterian] Book of Common Worship.  This prayer accuses God of ignoring the person praying.  How can prayer be so blunt?  How can we speak to God in such a disrespectful manner?”[3]

I began by mentioning how we’re hesitant to speak about certain things with each other.  I gave the illustration of the fellow’s Aunt Rose, and how spiritual companionship was denied.

But with the psalms, with prayer, with worship, we bring God into the equation.  There is an entire category of psalms that are psalms of lament.  These are cries for help, and yes, they can be very accusatory in nature.  Psalm 22 is perhaps the best-known psalm of lament, mainly because of its first line.  As he is dying on the cross, Jesus calls out, “My God, my God, why have you forsaken me?”

Psalm 22 begins on that agonizing note, but something happens as we journey through it.  By the time we reach the end, the psalm is positively joyful.  “Posterity will serve him; future generations will be told about the Lord, and proclaim his deliverance to a people yet unborn, saying that he has done it” (vv. 30-31).

And what about Psalm 13?  It begins, “How long, O Lord?  Will you forget me forever?  How long will you hide your face from me?”  But its ending has a very different tone.  “I trusted in your steadfast love; my heart shall rejoice in your salvation.  I will sing to the Lord, because he has dealt bountifully with me” (vv. 5-6).  Again, we go from lament—even pointing the finger—to elated celebration. 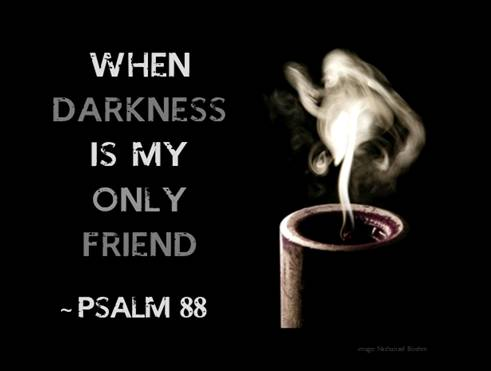 Surely Psalm 88 must follow the same path.  It’s in the Bible; shouldn’t it also wind up as praise?  Verse 1 says, “Lord God, my savior, I cry out all day, and at night I come before you” (Good News Bible).  Surely by the time we get to its conclusion, the psalmist has worked out some sort of resolution.

Here’s verse 18 in the NRSV:  “You have caused friend and neighbor to shun me; my companions are in darkness.”  That doesn’t sound very much like praise.

Some other translations sound even less like praise.  Here’s the Good News Bible:  “You have made even my closest friends abandon me, and darkness is my only companion.”

Here’s the NIV:  “You have taken my companions and loved ones from me; the darkness is my closest friend.”  Perhaps the New Jerusalem Bible is the gloomiest:  “You have deprived me of friends and companions, and all that I know is the dark.”

“All that I know is the dark.”  This is some serious lamentation!  We are looking at the only psalm without a single note of blessing.

I feel compelled to ask a question that others have presented over the centuries.  How much danger is the psalmist actually in?  Is the psalmist really at death’s door?  Our prayer has all kinds of “deadly” sounding language.  Our writer speaks of being “like those forsaken among the dead, like the slain that lie in the grave” (v. 5).  The question is posed, “Do you work wonders for the dead?  Do the shades rise up to praise you?” (v. 10).

We really don’t know what the situation is.  Maybe the psalmist is in mortal danger.  Still, what really matters is not the particular situation; what matters is that that is how the psalmist feels.  Our writer, our poet, is in distress.  This is a person who feels a sense of despair.

Let’s pick up on a theme from earlier:  prayer being blunt and apparently disrespectful.  Following with Beth Tanner, we need “to stop and think about how we pray and what that says about our relationship with God.  How have you been taught to pray?”[4]

My guess would be that most, if not all, of us have learned to pray, whether by teaching or by example, in a polite way.  Some of us have learned certain rules.  (In fairness, if some methodology assists you in prayer, then use it.  As long as we don’t become slaves to some format, exploring the depths of prayer is obviously a good thing!)

One method I would imagine none of us learned was the chaotic, soul-baring cries of the 88th psalm.

With a title like “Dark Praise,” it might be asked, “How is this praise?”  How can these angry, painful demands of God be considered praise? 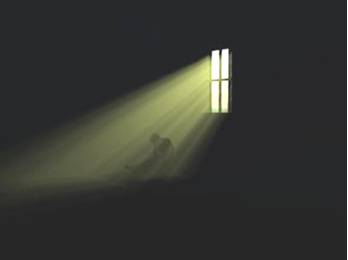 “To speak honestly and demand that God come and do something,” Tanner comments, “speaks volumes about the relationship between the one praying and God.  If I dare to speak my fears and my greatest hurts, then I am also acknowledging the importance of this other to me and the power that this other has in my life…  It is praise not because it is polite or politically correct, but because it is brutally honest and open.”[5]

This is analogous to relationships with other people.  Do we share our greatest fears and hurts with casual acquaintances?  Do we share them with a boss or a supervisor?  Do we present them with those kinds of demands?  (Not usually!)  But what about our closest friend—our closest loved one?

There’s something we need to realize about this ancient poet.  When we read these words from so long ago, we have to keep something in mind.  This is a person of faith.  This is not the work of one whose mission it is to ridicule or to defame.  Psalm 88’s first three words in Hebrew are translated into English as “Yahweh, God of my salvation.”

Even though the psalm contains no breath of blessing, this is still praise.  It is dark praise, and that makes us uncomfortable.

Mennonite pastor Isaac Villegas describes Psalm 88 in an interesting way.  He calls it “that member of the family nobody knows what to do with.  He’s at all the family reunions, and his name comes up in all the jovial stories, but nobody wants to get caught alone with him in the living room.  He’s awkward… irrational… strange.  So he sits there and everyone goes outside and explains why he’s so strange and how he fits into the whole family dynamic.  But nobody takes the time to really listen to strangeness and let him explain himself, and maybe change how everyone else views the family.”[6]

There can be a temptation to water down Psalm 88, to sand off the rough edges.  We want to force it into our predetermined ideas.  We might think, “For this to be scripture is just too outrageous!”  But what if we just accept the poet on his own terms?  Can we love her for who she is?  What if we just listened?  What would happen to us if we did?  Or maybe I should rephrase that:  what does happen to us when we do it?  What happens to us when we accept that joy also involves lamentation?

Deep in the depths of that darkness, there is gospel.  At the bottom of the bottomless pit, there is good news.  Even there (perhaps especially there), Christ reigns in victory.  When we honor that—when we honor the strangeness that is each other—then we have learned the secret of dark praise.