A couple of years ago, I led a discussion of a book by church consultant Peter Steinke, Congregational Leadership in Anxious Times.[1]  We were talking about the ability to keep one’s head when emotions might overwhelm.  At one point, the discussion took a rather strange turn.  I will admit that I was responsible for that strange turn!

I mentioned the movie World War Z.  It’s about zombies taking over the planet.  It stars Brad Pitt as Gerry Lane, who works with the UN.

He hears about a wall that the Israelis have built to keep out the zombies.  So he boards one of the few planes left flying and goes to Israel, to check it out.  Upon arrival, Gerry meets Jurgen Warmbrunn, an Israeli official, and asks how they could have known to build a wall.  He responds, saying they intercepted a message from an Indian general who said they were fighting “the Rakshasha.  Translation, zombies.”  (And yes, I did consult the internet for lines that I had forgotten!)

Gerry looks at him in disbelief.  “Jurgen Warmbrunn,” he says, “high-ranking official in the Mossad.  Described as sober, efficient, not terribly imaginative.  And yet, you build a wall because you read a communiqué that mentions the word ‘zombie.’”

Warmbrunn sympathizes with his disbelief.  Then he talks about events in which the Jews thought they were safe:  concentration camps in the 30s, the ‘72 Olympics, and war in 1973.  People doubted the danger until it was too late.

“So,” he says, “we decided to make a change.  The tenth man.  If nine of us look at the exact same information and arrive at the same conclusion, it’s the duty of the tenth man to disagree.  No matter how improbable it may seem, the tenth man has to start digging on the assumption that the other nine are wrong.”

Gerry asks, “You were that tenth man?”

He replies, “Precisely.  Since everyone assumed that this talk of ‘zombies’ was cover for something else, I began my investigation on the assumption that when they said ‘zombies,’ they meant zombies.”

Unfortunately for them, the wall doesn’t protect them very long.  Some refugees are singing loudly, and the zombies outside are drawn to the noise.  They climb the wall, with the humans trapped inside.  Like fish in a barrel, they quickly become dinner.  Of course, Brad Pitt escapes!

What I found interesting was the concept of the “tenth man (or woman),” one who disagrees with the others, no matter how unlikely their position might be.

In John 20, I wonder if we can see Thomas, in a way, playing the role of the tenth man.  Going back to my original comment, can we possibly see him as the one who keeps his head when emotions might overwhelm?  I’ll admit that would give his nickname “doubting Thomas” a certain wisdom and awareness of his role! 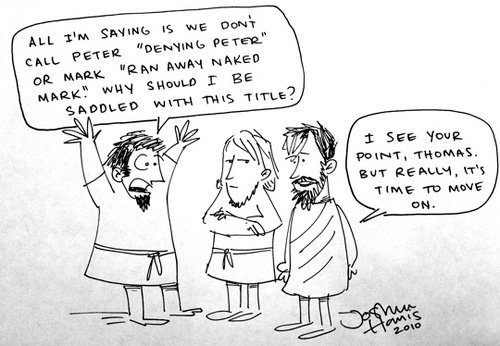 I think St. Thomas has been unfairly portrayed.  It’s not like he’s the only one who doubts that Jesus has been raised from the dead!  Maybe the reason he gets singled out is because he’s the only one absent on that first Easter evening.  Being the odd one out is always a tricky situation.

Here’s a quick side note.  On that evening, the scripture says the disciples were behind locked doors “for fear of the Jews” (v. 19).  John wrote his gospel in the 90s, near the end of the first century.  By that time, the split between Judaism and Christianity was a couple of decades old, and there was some Jewish persecution of the church.  Still, the reference to “the Jews” is unfortunate.  Throughout history, not understanding the context, people have targeted the Jews as bad guys.  That’s always been a grave injustice.

Now, back to Thomas.  Not everyone has given him grief.  Like the other apostles, who took the gospel to different places, Thomas went on a trip of his own.  Tradition says he headed to the east, eventually arriving in India.  That’s also where he was martyred.  There is a branch of the church known as the St. Thomas Christians.  They still exist, and they trace their history back to the apostle.

Having said that, we still have to acknowledge that Thomas does doubt.  So what about it?  Nancy Rockwell, in her blog “The Bite in the Apple,” has some thoughts about that.[2]

“Like a breath of fresh air, Doubting Thomas enters the over-lilyed atmosphere of Easter.  He’s reliably among us on the Sunday after Easter—and on every Sunday.  He’s part of us, steadily, reassuringly.  He anchors us.”  She admits that believing someone has come back from the grave can be a bit much!

Again, Thomas isn’t the only one in his group who doubts.  He is, however, the only one who gives full voice to it; he’s the only one who states it plainly.  Rockwell draws a parallel between his situation and the ones we find ourselves in.

Doubting Thomas, she says, “belonged to the group, those who believed, those who said they did but didn’t, and those who had questions but were afraid to pipe up.”  She continues, with a comment we might find surprising, “Churches are not communities of believers, but communities of people who have questions, who doubt, who hope, who come to find something out.”

I don’t know about you, but I have been in churches where you dare not ask any questions.  Not swallowing everything hook, line, and sinker, is considered to be a no-no, even sinful.  There’s a saying that goes, you are supposed to check your brain at the door.

It’s a good thing when we’re a community that welcomes questions, especially the question, “Why?”  That’s a nice one!  It can also drive you crazy.

Earlier in John’s gospel, there’s an episode that I think shows the courage of Thomas.  (That explains the word “daring” in the title!)

In chapter 11, Jesus gets word that his dear friend Lazarus is at death’s door.  He doesn’t immediately take off, but when he says it’s time to go, his disciples remind him that he’s a wanted man.  If the authorities hear he’s back in town, there’s a jail cell with his name on it!  And there might be something worse with his name on it.

Thomas speaks up and says, “Let us also go, that we may die with him” (v. 16).  Some might claim that he’s being a naysayer.  Some would chastise him for sending out negative vibes.  Some might say, “Where’s your faith, Thomas?”

Maybe those are fair complaints.  But it seems to me that we can also see him demonstrating not only courage, but loyalty.  It looks like he’s ready to die with Jesus.  And when his doubts are answered in chapter 20, with Jesus appearing before him, Thomas proclaims, “My Lord and my God!” (v. 28).  For many people, this is the highlight of the story—when Thomas finally believes.

Our friend Nancy has a slightly different spin.  Three different times Jesus says, “Peace be with you” to these “emotionally exhausted people” (vv. 19, 21, 26).

There is immense power in the peace of Christ.  It is indeed extended to all, even to those of us who sometimes doubt, whether that doubt is daring or not!  That’s what our liturgical use of it in worship is all about.  Passing the peace of Christ isn’t a matter of chit-chat, of catching up on current events.  It is a matter of binding ourselves together in the bond of peace.  Or better, recognizing and embracing the bond of peace that’s already there.

It might seem like having doubts and the peace of Christ contradict each other.  But God comes to us in the contradictions of our lives.

We need not be defeated or paralyzed.  “These same contradictions can bring us into touch with a deeper longing, for the fulfillment of a desire that lives beneath all desires and that only God can satisfy.  Contradictions, thus understood, create the friction that can help us move toward God.”

That’s the gift that Thomas discovers.  On the other side of his questions—and even his doubt—he finds God.

I wonder, is it possible to admit that it’s necessary to question, even to doubt?  Is it necessary to do that in order to love our Lord with heart, soul, and mind?  I don’t have the final answer on that.  As I like to do, I am posing the question!

Still, after Thomas’ eyes are opened, Jesus gives him this to chew on.  “Have you believed because you have seen me?  Blessed are those who have not seen and yet have come to believe” (v. 29).

Who are these blessed “who have not seen and yet have come to believe”?  To begin with, there are the people who first hear John’s gospel; they live near the end of the 1st century.  This includes Christians one, two, even three generations after Jesus.  And it includes those down through the centuries, leading to us today.

So I think I’m safe in saying:  take heart.  Remember, churches are more than communities of believers; they are communities of people who have questions, who doubt, who hope, who come to find something out.  And thanks be to God, our Lord is faithful and patient with us.  Our Lord extends peace and pronounces us blessed when we come to believe, no matter how long it takes.  That’s what it means to be the people of the risen Christ.