gospel in the dark

How about Psalm 88 as a way to lift your spirits?  And then there’s John 11:35, “Jesus began to weep.”  Or as it’s more commonly rendered in the King James and other versions: “Jesus wept.”  After the scripture readings, saying, “This is the word of the Lord.  Thanks be to God,” might feel pretty strange!

There’s a song that is not in the blue hymnal which we use (The Presbyterian Hymnal), but it is in the older red hymnal (The Hymnbook).  It’s “Be Still, My Soul.”  It’s set to the wonderful tune, “Finlandia.”  The hymnal includes three verses, but it doesn’t have this one:

“Be still, my soul: when dearest friends depart, / And all is darkened in the vale of tears, / Then shalt thou better know His love, His heart, / Who comes to soothe thy sorrow and thy fears. / Be still, my soul: thy Jesus can repay / From His own fullness all He takes away.”[1]

Be still, my soul: when dearest friends depart, and all is darkened in the vale of tears.  What a beautiful and haunting image: “the vale of tears,” the valley of tears.  It’s a somber description of our life in this mortal coil.  It’s omission from the hymnbook is a commentary on how we often reshape our singing and liturgy to avoid awkwardly acknowledging certain topics. 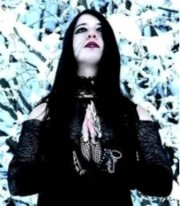 Still, I think that song would be loved by those who are into Goth music!

There’s a prayer website called Sacred Space.  Among the things they post are thoughts for the week, things to help guide prayer.  I made a note of something that appeared some time ago.  It dealt with a topic that is one of those uncomfortable subjects: death.  (At least, in my experience, when I’ve gone to parties, it’s not often a topic of conversation!)

According to the prayer guide, “Of the many ways to die alone, the most comfortless and solitary is when family and friends conspire to deny the approach of death.  They may feel, ‘I couldn’t take away her hope.’  But without acceptance of the truth, they remove the possibility of spiritual companionship at the end.”[2]

We’re told that in his book, How We Die, Sherwin Nuland “remembers with regret how the family conspired to avoid the truth when his beloved Aunt Rose was dying.  ‘We knew—she knew—we knew she knew—she knew we knew—and none of us would talk about it when we were all together.  We kept up the charade to the end.  Aunt Rose was deprived, and so were we, of the coming together that should have been, when we might finally tell her what her life had given us.  In this sense, my Aunt Rose died alone.’”

I think there’s a parallel between how we often speak of death, and in a broader sense, of lamentation, expression of grief, in general. 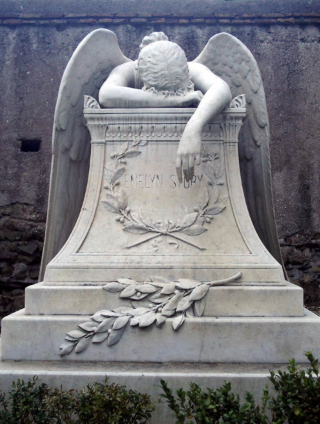 [The above image is from diglib.library.vanderbilt.edu/act-imagelink.pl?RC=54142, “Angel of Grief.”]

That’s also seen in the worship of the church.  I just mentioned how we try to avoid those unpleasant realities in our hymns and liturgies.  The folks who put the lectionary together tended to leave out the problematic, uncomfortable verses.  Maybe you know what I’m talking about.  Stuff like, “Slaves, obey your earthly masters,” and “I permit no woman to teach or to have authority over a man” (Ep 6:5, 1 Tm 2:12).  Admittedly, those need some big time work done to them!

Another good case is the story in 1 Kings 3, where it talks about Solomon’s dream, in which he asks God for wisdom (vv. 3-14).  God congratulates him for not asking that his enemies be killed or that he be made a wealthy man.

What conveniently gets skipped over is Solomon’s marriage to the Pharaoh’s daughter to form an alliance with Egypt.  My guess is that’s one of those awkward subjects!

In the same way, there are certain psalms that appear nowhere in our lectionary.  Hint: Psalm 88 is one of them.  After listening to that litany of doom and gloom, maybe we can see why it got left out.

Still, one of the most treasured psalms, Psalm 22, is filled with anguish.  Jesus on the cross screams out its beginning: “My God, my God, why have you forsaken me?”  But it does have notes of hope, and by the time we get to the end, the psalmist announces, “Posterity will serve him; future generations will be told about the Lord, and proclaim his deliverance to a people yet unborn, saying that he has done it” (vv. 30-31).

Surely Psalm 88 follows the same path.  It’s in the Bible; shouldn’t it also wind up as praise?  Verse 1 says, “Lord God, my savior, I cry out all day, and at night I come before you” (GNB).  Surely by the time we’re finished, we’ve worked out some kind of resolution.

Here’s how it ends in the NRSV: “You have caused friend and neighbor to shun me; my companions are in darkness” (v. 18).  That doesn’t sound very much like praise.

I think some of the other translations sound even less like praise.  Here’s the NIV: “You have taken my companions and loved ones from me; the darkness is my closest friend.”  I think the New Jerusalem Bible is even gloomier: “You have deprived me of friends and companions, and all that I know is the dark.”

“All that I know is the dark.”  Friends, this is some serious lamentation!  We are looking at the only psalm without a single note of blessing.  It’s the only psalm in the Bible without one word of hope.

There’s something we need to realize about this ancient poet.  When we read these words from so long ago, we have to keep something in mind.  This is a person of faith.  This is not the work of someone engaged in ridiculing or mocking.  Psalm 88’s first three words in Hebrew are translated into English as “Yahweh [Lord], God of my salvation.”[3]

Even though our psalm has no breath of blessing, it is still praise.  It is dark praise, and that makes us uncomfortable. 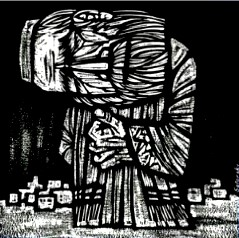 Dominique Gilliard is a minister in the Evangelical Covenant Church; he’s the executive pastor of New Hope Covenant Church in Oakland.  He wrote an article called “Reclaiming the Power of Lament.”[4]  It is a revelation.  It is a challenge.  And I think it’s a perfect meditation for the Lenten season.

“Somewhere along the way,” he says, “we modern Christians got lament wrong: we began thinking of it as optional instead of a required practice of the faith.”  That goes along with our reluctance to even mention it.  Still, scripture is filled to the brim with lamentation.  Here’s just a taste: the book of Lamentations (of course), the book of Job, a huge number of the Psalms, Paul’s grief about his thorn in the flesh, and again, Jesus’ weeping.

Gilliard speaks about tragedies in our nation.  Among others, he mentions Ferguson, Baltimore, and Charleston.  The hits just keep on coming—and that’s not counting disasters all over the world.  They just wash over us until we can’t keep track.  In response to that, he says, “Lamentation, however, forces us to slow down…  Lamentation prevents us from becoming numb and apathetic to the pain of our world…  Lamentation begets revelation…  It opens our ears to the sounds of torture, anguish and weeping that are the white noise of our world.”

Here’s something I find fascinating and challenging.  “To live without lament is to live an unexamined life.”  We lose touch with what makes us human. 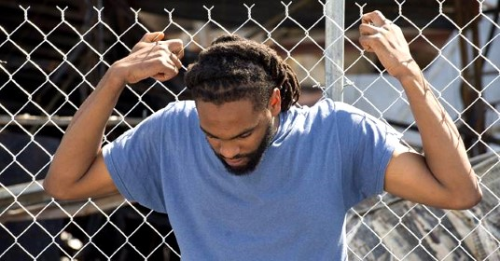 [A man in Ferguson, Missouri, holds on to a fence on August 15, 2014, at the site of a convenience store destroyed during rioting after the shooting death of Michael Brown by police.  Bigstock/Gino Santa Maria]

We don’t have to look very far for something to lament.  There is much in our lives to provide reason for mourning.  But we need not yield to despair.

Our friend Dominique hits on something.  “When faithfully engaged and authentically enacted, lamentation keeps us accountable to our baptismal vows.  It reminds us of our need for God, one another, and the Holy Spirit’s guidance.”

Our baptismal vows!  When the sacrament is celebrated, we “as members of the church of Jesus Christ,” are asked to “promise to guide and nurture…by word and deed, with love and prayer, encouraging [those being baptized] to know and follow Christ and to be faithful members of his church.”  We vow to be accountable to each other, to watch out for each other, as we walk the journey of faith.

Blest be the tie that binds.  “We share our mutual woes, / Our mutual burdens bear, / And often for each other flows / The sympathizing tear.”

And what about Jesus when he weeps?  Is he putting on a show?  Surely his understanding that he can raise Lazarus from the dead would prevent the need for tears.  Does he weep with empathy for Mary and Martha, because they are weeping?  Here’s my guess.  Even though he knows he will raise Lazarus, he still feels the pain himself.  After all, he is human!

If we also acknowledge that Jesus is the image, the icon, of God, that also says something.  Do we think of lamenting, of grieving, as weakness?  If so, so be it.  God laments.  At the end of the day, maybe that’s enough.  God’s weakness is greater than all the strength we can muster.  The weakness of God serves as a model for us. 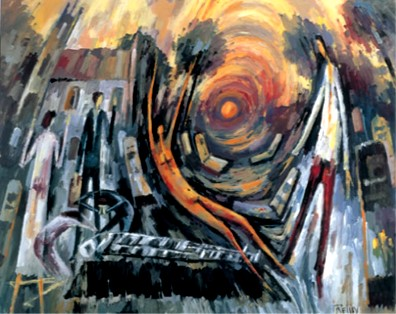 The Raising of Lazarus by John Reilly (1962)

Lent reminds us that we must pass through the valley of tears before we arrive at the resurrection.  We do not honor each other by ignoring the reality of lament.

In the book, Uncommon Gratitude, Joan Chittister says, “Darkness deserves gratitude.  It is the alleluia point at which we learn to understand that all growth does not take place in the sunlight.”[5]

Think of the hymn, “Abide with Me.”  It’s listed in the section of our [Presbyterian] hymnal called “Evening Hymns.”  I imagine that’s due to the first lines.  “Abide with me: fast falls the eventide.  The darkness deepens; Lord, with me abide!”  The hymn speaks of things in our lives which pass away.  But unlike our psalm, it ends on a strong note of praise and affirmation.

“Hold Thou Thy cross before my closing eyes; / Shine through the gloom and point me to the skies: / Heaven’s morning breaks, and earth’s vain shadows flee; / In life, in death, O Lord, / abide with me.”

As incredible as it is, deep in the depths of that darkness, there is gospel.  At the bottom of the bottomless pit, there is good news.  Even there (perhaps especially there), Christ reigns in victory.  There is gospel in the dark.