spiritual formation in a distant land

That’s the kind of formation that simply happens. But just as there’s a difference between the formation of a body that belongs to a coach potato and a body that belongs to one who understands exercise, there’s also a difference in the realm of the spirit. Willard describes a distinctively Christian spiritual formation as “the Spirit-driven process of forming the inner world of the human self in such a way that it becomes like the inner being of Christ himself.” (22) That’s not a bad definition.

But giving definitions of words usually isn’t the best way to make a point. Stories grab our attention more easily than do definitions. So here’s a story from my own experience.

Banu and I were ordained in February 1997 at Overbrook Presbyterian in Philadelphia. My pastor* gave me this charge at the end of the service: tell your story of being in a distant land. Using that image from the parable of the prodigal son, he was talking about several things.

At the time, I wore a bandana on my head; it covered a rather visible scar. It was a mute witness to my experience of brain cancer. I had been on a journey, almost a year and a half long at that point, which included seizure, diagnosis, surgery, radiation therapy, another seizure, another surgery, then seven cycles of chemotherapy.

Along the way, plenty of CAT and MRI scans, a port temporarily implanted in my chest for antibiotics, needles and more needles, and did I happen to mention…needles? To my pastor, that constituted “being in a distant land.”

He was also referring to the spiritual journey I had taken, at least, the parts of it that he knew. Coming from an Assemblies of God church in Tennessee to an American Baptist seminary in Philadelphia to the PC(USA) church across the street—and knowing that I had worshipped and worked with Christians of many different stripes besides that—that also constituted “being in a distant land.”

I must confess, though, I’ve often discounted my pastor’s charge to me. I’ve included parts of my story from time to time, but probably not in the deliberate way he intended. 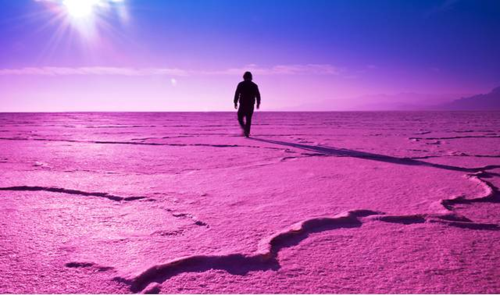 Still, as I’ve sometimes told people who are hesitant to speak about God and faith: it’s not a bad idea to start with what the Lord has done in your life.

It’s also true that many of the greatest works of all time have been life stories—biographies and autobiographies. A good example of the latter is Thomas Merton’s journal, The Sign of Jonas. It covers his first few years in the Abbey of Gethsemani, the monastery in Kentucky where he lived. That book picks up where The Seven Storey Mountain leaves off. In it, Merton reflects on this business of telling one’s own story.

I especially like that last line, when he refers to himself in his current work as someone to whom he’s “never had the dishonor of an introduction.” I think I know what he’s talking about. I look back at stuff I wrote in the past—more than that, I look back at who I was—and I wonder, “Who was that guy?” Talk about “being in a distant land.” That’s one place I never want to see again! (Still, from time to time, I revisit it.)

Thomas Merton says such things, because he knows that he must die, so that Christ can live in him. But there’s absolutely no hint of self-hatred here; that would mean hating God’s good creation. Rather, it’s humility that teaches him his own unworthiness to the same extent that he promotes himself. But to the extent that Christ shines through him, he has a message that will endure for generations. And that’s true for all of us.

He speaks of this pretty clearly in a prayer. “You have made my soul for Your peace and Your silence, but it is lacerated by the noise of my activity and my desires.” And speaking of his own body and spirit, he says, “I do not possess my house in silence…

“I am content that these pages show me to be what I am—noisy, full of the racket of my imperfections and passions, and the wide open wounds left by my sins. Full of my own emptiness. Yet, ruined as my house is, You live there!” (47) There aren’t many places in which my story parallels Merton’s, but this is one of them!

My house is indeed ruined, but still, God lives there.

For Christian spiritual formation to happen there does need to be that kind of honest self-evaluation. According to our friend Dallas Willard, the appeal of such a course in life “is totally obvious to any thoughtful person. But,” he says, “we are rarely thoughtful.” (The Divine Conspiracy, 325)

He quotes the poet A. E. Houseman in saying, “‘We think by fits and starts.’ Thus a part of the call of God to us has always been to think. Indeed the call of Jesus to ‘repent’ is nothing but a call to think about how we have been thinking.” The Greek word for repentance is metanoia—literally, a change of mind.

The point is, spiritual formation involves both mind and body. Where the mind leads, the body will follow.

The apostle Paul, in chapter 4 of his letter to the Ephesians, shows this mind-body connection. Verse 25 says “putting away falsehood, let all of us speak the truth to our neighbors, for we are members of one another.” Paul calls them to put away “falsehood.” In Greek, the term is pseudos; Paul says to put away “the lie.”

But before I get too far away from my underlying theme of story, let me bring our collective story into view. In one way or another, we all have been in distant lands.

How do we cooperate with the Spirit in the process of Christian spiritual formation? How can we use our minds differently? Certainly daily prayer and reflective reading of the scriptures can transform our thinking. How can we use our bodies differently? Other spiritual disciplines, like fasting, silence, and pursuing justice, can liberate us from false and damaging desires. We can be free to recognize “the lie,” and say no to it, over and over.

I want revisit my former pastor who got me started on this story of being in a distant land. In one of the church newsletters, he shared some thoughts from his own story—his visit, so to speak, to a distant land. I think it speaks well to our own story here.

He says, “Have I grown so accustomed to retreat that I fear victory, so familiar with the role of victim that I know not how to play any other?… Does my sense of inadequacy [so excuse] me from responsibility that I now can enjoy criticizing others without even having to try? How Lord, shall I dare to think of myself as powerful, and responsible?

“For anyone who has heard, however dimly, the claims of Easter, these are questions which must be answered. Jesus Christ becomes a crisis to all who are witnesses. He stands in the path of our retreat, requiring we say who he is.

“Take then the light of Christ as your light to show you the way. Have you hesitated to rise and to walk on to the next job, the new home, the new school, the new relationship because you could not see the way; dare now to walk on. Because you now dare to see death, you can begin to look forward to life.”

Intentional formation of our spirits leads us to dare life in a new way. We will travel to distant lands, where the road might be strange and dark. Still, the sure hope we have in Jesus is that our hand will be held, and our path will be lit, even if it’s only a couple of steps at a time! We don’t get the whole map, as much as we might think we want it.

This is the challenging task of spiritual formation—allowing ourselves to be the experiment in the laboratory of the Spirit. In this laboratory, the end result is one where each and every day, we are transformed more and more into the likeness of Christ.

What was once a distant land, once a far country, slowly becomes more familiar. Thanks be to God.

[The photo is by Felix Rioux]

*Rev. David K. McMillan, whose permission I did not request to use his charge. But being the wonderful pastor he was, I hope he wouldn’t mind!