The gospel according to St. Luke has one of the most beloved parables of Jesus, the Prodigal Son. The story of this prodigal (that is, “wasteful”) son is like a treasure chest, filled with precious gemstones. So many valuable nuggets can be found within it.

In the year 2000, my wife Banu and I moved to New York. The first church we served in this state was in Jamestown. One year when we were there, the congregation had a Lenten series in which people from various faiths and philosophies were invited to come and share their stories with us. (One of our parishioners invited her Tai Chi instructor.)

We had one session with a teacher who shared his experience as a Muslim. It was a wide-ranging conversation, covering many topics. One that came up was the matter of grace. He asked me what we meant by it. I took a lesson from Jesus, who in the scriptures tends to tell stories rather than give textbook answers. So in brief detail, I talked about the prodigal son. I said the father is the picture of grace. 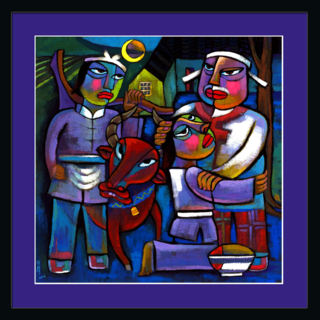 In Luke 15, some Pharisees and scribes are upset because Jesus is being friendly with undesirables, those who according to the religious and social standards are considered unclean. Apparently Jesus thinks these Pharisees and scribes need a refresher course on grace, because that’s what they get. Maybe I’m mistaken, but my guess would be we all need a refresher course on grace.

As I just said, Jesus loves to tell stories. He responds with stories of lostness: a lost sheep, a lost coin, and finally, a lost son.

He introduces the third one by saying, “There was a man who had two sons” (v. 11). The younger son presents his father with a blunt request. He wants his portion of the inheritance. And he wants it right now! Many have commented on how outrageous a request this is. As things turn out for the young man, things really do get outrageous.

Barbara Brown Taylor speaks of a ritual in the Talmud called the qetsatsah ceremony. It’s designed “to punish a Jewish boy who loses the family inheritance to Gentiles. Here’s how it works. If he ever shows up in his village again, then the villagers can fill a large earthenware jug with burned nuts and corn, break it in front of the prodigal, and shout his name out loud, pronouncing him cut off from his people.” He’s disgracefully driven out, shamefully sent away.

Having said all that, the father still agrees “to [divide] his property between them” (v. 12). And within a few days, the son takes his massive amount of spending money, and as the scripture says, “traveled to a distant country” (v.13). This is the road trip of a lifetime. He wants to get as far away as possible. He’s young, rich, and ready to party!

Unfortunately, our boy is not paying attention to his spending. The Bible says he squanders his property in dissolute, reckless living. And adding insult to injury, the place gets hit with famine.

Desperate, the young man agrees to work for a pig farmer. Feeding swine, not the most sought-after position, is truly an abomination for a Jew. And with the crappy paycheck, he can’t even afford to eat. His gnawing hunger makes the pods he feeds the animals look pretty tasty. He literally wants to “pig out.”

Eventually, he gets tired of this hogwash and realizes something. “How many of my father’s hired hands have bread enough and to spare, but here I am dying of hunger!” (v. 17). And he rehearses what he’ll say: he’ll admit his guilt and beg to be taken on as a worker. So off he goes.

At this point, I want to inject a thought. Remember, Jesus isn’t simply telling a fascinating story. He wants his hearers to see themselves in what he’s saying. I invite all of us to do the same. Think of ways in which we’ve been the younger son. (Or imagine yourself as a prodigal daughter.) Think of blessings we’ve squandered, craving the food of swine. 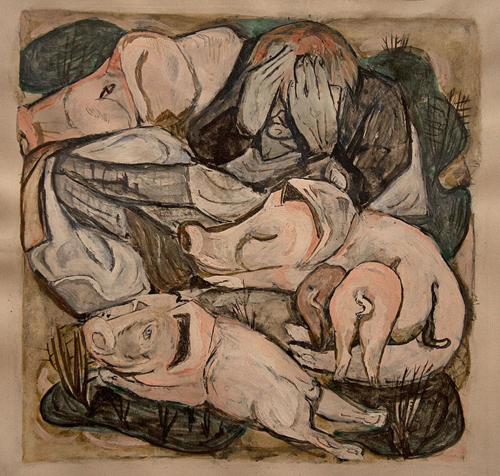 With verse 20, the tone changes. The focus shifts from the younger son to the father. He’s really the glue that holds this entire story together. In describing the father, Jesus paints a picture totally at odds with what his culture would expect. At the first glimpse of the returning prodigal son, the father immediately sprints toward him and embraces him.

In ancient times, no self-respecting man would run like that, “like a girl, like a mother instead of a father.” Aristotle reportedly said, “Great men never run in public.” The father doesn’t care about social convention.

The younger son launches into his speech, confessing his sin and admitting that he no longer deserves to be considered a son. But before he can beg for a job, his father interrupts and says, “Let’s get you dressed up in style. Slay the fatted calf! It’s time to really party!”

At verse 25, we come to the second major section of the parable. This is where the elder son enters the picture. If the younger son represents irresponsibility and wastefulness, then the elder son symbolizes responsibility and duty. While the younger son was off playing, he was making sure things got done. While the prodigal was nowhere to be found, he was the good son, the model son. And while he’s out in the field—wouldn’t you know it?—singing and dancing are going on!

When a slave tells him the reason for the party, let’s say he is not pleased. He refuses to go back to the house. This prompts the father to go out to him and plead. It’s at this point that the elder son unleashes the flood of anger and resentment and pain that has welled up within him.

For years, I’ve worked like a slave for you, “and I have never disobeyed your command” (v. 29). He feels like a glorified servant. And to what thanks? You’ve never even given me a stupid goat so I can feast with my friends. “But when this son of yours came back, who devoured your property with prostitutes, you killed the fatted calf for him!” (v. 30).

Notice that the older son refers to his wayward sibling as “this son of yours,” not “my brother.” His heart has become hardened. The older brother needs to undergo conversion as much as the younger one. But with him, it isn’t so obvious. He hasn’t lived a wild life; he’s always done the right thing. But like everyone who makes sure that they do the right thing, his sin is on the inside. It is more subtle.

And the father understands that. He also understands the pain of his son, the son who stayed at home, rather than going off and sowing wild oats. He feels his pain! The father responds in verse 31 begins with the word teknon, translated in the NRSV as “son,” but it has the more intimate meaning of “child.”

He appeals to his embittered offspring: child, my son, “you are always with me, and all that is mine is yours. But we had to celebrate and rejoice, because this brother of yours was dead and has come to life; he was lost and has been found” (vv. 31-32).

One of the most beloved spiritual figures of the twentieth century was Henri Nouwen. Of his many books, the one he considered to be his favorite was The Return of the Prodigal Son.

Published in 1992, four years before his death, it tells how Rembrandt’s painting of the same name sent him on a journey that shaped the rest of his life. In fact, he was on his way to Russia in 1996 to do a TV documentary on the painting when, during a stop in the Netherlands, he died from a heart attack. 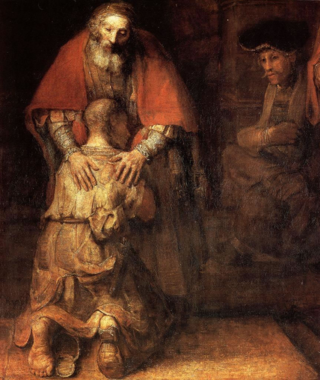 In the book he makes the painful confession that he sees too much of the elder brother in himself. “It is strange to say this,” he says, “but, deep in my heart, I have known the feeling of envy toward the wayward son. It is the emotion that arises when I see my friends having a good time doing all sorts of things that I condemn. I called their behavior reprehensible or even immoral, but at the same time I often wondered why I didn’t have the nerve to do some of it or all of it myself.” (70)

Nouwen identifies with the elder brother’s sense of loneliness—the bitter and terrible loneliness of resentment that prevents joy. (And instead of the chest tightening up, the ability to take a deep breath!)

He admits, “Often I catch myself complaining about little rejections, little impolitenesses, little negligences… As I let myself be drawn into the vast interior labyrinth of my complaints, I become more and more lost until, in the end, I feel myself to be the most misunderstood, rejected, neglected, and despised person in the world.” (72)

I wonder, haven’t we all felt that way at one time or another? For Nouwen, his deliverance came in the knowledge that he had to move from being either of the sons to being the father, the one who extends grace.

Part of the artistry of this parable is that it’s incomplete. We don’t know the ending. Is the elder son able to overcome his hurt and anger and join the festivities? Are the two brothers ever reconciled? Those questions remain unanswered.

But we have a say in how the story unfolds. When we see in ourselves the wastefulness of the younger and the resentment of the older, we can remember that this is the gospel. This is the good news: that there is one who gives his life to us so that we may be reconciled. The good news is that God is prodigal: wasteful in generosity, wasteful in hospitality. The final paragraph of Henri Nouwen’s book contains the joy of that discovery:

“When, four years ago, I went to Saint Petersburg to see Rembrandt’s “The Return of the Prodigal Son,” I had little idea how much I would have to live what I then saw. I stand with awe at the place where Rembrandt brought me. He led me from the kneeling, disheveled young son to the standing, bent-over old father, from the place of being blessed to the place of blessing. As I look at my own aging hands, I know that they have been given to me to stretch out toward all who suffer, to rest upon the shoulders of all who come, and to offer the blessing that emerges from the immensity of God’s love.” (139)

That is the gospel, the good news. We receive prodigal, wasteful grace, and we are called to share that freely.