you are very much deceived

Throughout most of human history, the ties that bind in matrimony have been due to arranged marriages.  Many cultures today still embrace the practice.  Banu and I knew students at our seminary who had, or would have in the future, an arranged marriage.  Usually, it is the parents who do the arranging.  Cultural expectations frequently, if not always, play a large role in the matter.

I won’t go through all the pros and cons involved.  On the positive side, arranged marriages eliminate the stress of finding a life partner.  There’s no agonizing over, “Is this really the one?”  When it works well, it encourages harmony within the families and within the society.

Of course, there is the negative side.  Again, I won’t go into all the ins and outs, but one big thing is omitted.  There is something to be said for dating!  There is something to be said for getting to know the person and just having fun—maybe finding out how compatible you are.  And that’s not to mention those who never even planned on getting married! 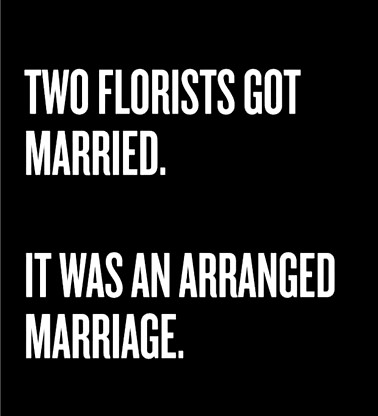 Still, I don’t need to tell you that marriages solely based on romantic feelings are not without problems.

Our Old Testament reading in Deuteronomy describes one version of an arranged marriage.  If a man dies, and he and his wife are childless, a brother who lives there is to take the widow as his wife.  The reason given is “so that his name may not be blotted out of Israel” (25:6).  It is important that the deceased man will still have an heir to keep his name alive.  Thus, the firstborn of this marriage will be reckoned as his offspring.

What happens if the fellow refuses to marry the widow of his dearly departed brother?  As we saw, that sets in motion a process which at the distance of cultures and centuries might seem, let’s say, eccentric.  The woman goes to the elders, who summon the brother and explain the situation.  If he still refuses, the woman, in public display, removes his sandal, spits in his face, and proclaims, “Here’s what happens to the guy who stabs his dead brother in the back.”  (Or words to that effect.)

To be known as one whose sandal was removed is a sign of shame.  The sandal on the right foot signifies ownership, and in this case, the claim of a bride.

I’ve gone through this little presentation because it provides the background for the Sadducees’ coming to Jesus in Mark 12.  So here we go.

“Some Sadducees, who say there is no resurrection, came to Jesus and asked him a ridiculous question” (v. 18).  Well, the text doesn’t say “ridiculous.”  I’m using a bit of artistic license.  They pose the scenario envisioned in the law of Moses, as we just saw.  We should take note, there’s no word of the woman going along with the plan, other than the cultural standards, which I suspect were concocted by men.

Now we’re entering ridiculous ground, as they dream up this totally believable story.  We have seven brothers, and we begin with the first brother dying.  However, the second brother also dies, leaving no children.  We move on to the third.  The same thing happens—or rather, does not happen.  Then to the fourth, then to the fifth, then to the sixth, then to the seventh.  Surely lucky number seven has success.  No, he meets his Maker, minus offspring. 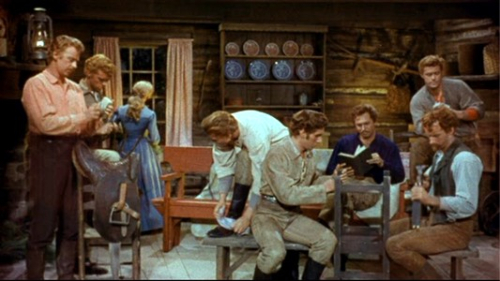 [These are not likely to be the brothers the Sadducees mentioned.]

After she’s run through all seven brothers (or maybe I should say, having been forced to run through all of them), the Sadducees end the story by simply saying of her, the one who’s been widowed seven times, “Last of all the woman herself died.”  You know, couldn’t they tell the story by allowing the poor woman a few years of peace and quiet?

Remember, these fellows don’t believe there is resurrection, so this question clearly makes perfect sense: “In the resurrection whose wife will she be?  For the seven had married her.”  I’m sure they told this tale with completely straight faces.

Who are these Sadducees, anyway?  We don’t know a whole lot about them.  They apparently are of an aristocratic nature; they are among the elites.  They aren’t exactly friends of the Roman government, but they also don’t want to upset the apple cart.

We’re told they don’t believe in the resurrection.  They rely strictly on the five books of Moses.  (Genesis, Exodus, Leviticus, Numbers, and Deuteronomy.)  There’s no word of resurrection in those books, or so the Sadducees believe.

One time while the apostle Paul is being interrogated, he realizes both Sadducees and Pharisees are in the group.  It was known that “Sadducees say that there is no resurrection, or angel, or spirit; but the Pharisees acknowledge all three” (Ac 23:8).  Paul said he was being tried “concerning the hope of the resurrection of the dead” (v. 6).  He is playing them against each other.  Predictably, the Pharisees come to his defense, saying, “We find nothing wrong with this man.  What if a spirit or an angel has spoken to him?” (v. 9).

Remember, the basis of the scripture text is the story told by the Sadducees.  Perhaps I misspoke in labeling it “ridiculous.”  Perhaps it actually happened.

Every year People magazine names its sexiest man alive.  (I suppose “alive” is better than the alternative.)  Last year, it was Michael B. Jordan.  Who is next?  Here’s a question which makes perfect sense: “After James Moore is named People’s sexiest man alive, how will he use his newfound fame?”  It is a perfectly plausible possibility, or maybe I should say, probability. 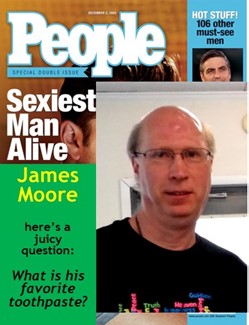 Long story short, Jesus knows they aren’t really searching for truth.  He points out several things they are unaware of and/or ignore.  He responds, “Is not this the reason you are wrong, that you know neither the scriptures nor the power of God?” (v. 24).  He finishes on this note: “you are quite wrong.”  The Greek word (πλαναω, planaō) can be read, “you are very much deceived.”  And it works both ways.  You have strayed from the path, and you would cause others to stray.

I’m reminded of Dante, who at the beginning of his classic book Inferno, lamented, “Midway through the journey of our life, I found myself in a dark wood, for I had strayed from the straight pathway to this tangled ground.”

How often are we duplicitous, even in a ridiculous fashion?  In what ways do we engage in willful ignorance?  We stray, and we cause others to stray.  Whether it is the Sadducees and their stupid question and absurd story or my firm expectation to be anointed as the sexiest man alive—we can be willfully ignorant.

Fortunately, there is a cure for our ridiculous duplicity!  Jesus would remind us that ours is a God, not of the dead, but of the living.  Willful ignorance and distribution of the absurd do not enhance life, but as with Dante, we find ourselves lost in a dark wood.

And best of all, we can use our imagination for creative purposes.

If the Sadducees haven’t come to Jesus looking for the truth (as I humbly asserted), then why bother him with their song and dance?  Could it be their story is deliberately stupid because they want to show how belief in the resurrection is stupid?  Of course, as Jesus points out, they have it all wrong.  When people are resurrected from the dead, nobody is getting married, be it arranged or not.  There’s a new creation; old things have passed away.

These Sadducees, being among the elite, the upper crust, have positions of respect.  They are influential.  People are expected to defer to them.  Doesn’t it seem likely that more than a little arrogance accompanies their grilling of Jesus?  (And it would seem “grilling” is an appropriate word.)  I would think they look down on this wandering rabbi who spends way too much time with the common folk.

How often do we express our own inner Sadducee?  Does arrogant disregard ever creep into our thoughts, even in a slight way?

Maybe I should start with myself.  Indeed, what haughtiness, what cynicism, what disdain do I express?

The Sadducees, due to their place in society, had certain privileges.  As a white, male, heterosexual, college-educated, lover of the NFL and NHL, what privileges do I have?  Do I deny they exist?  How desperately do I hold on to them?

The Sadducees manipulated the words of Deuteronomy to their own advantage.  How often do I do likewise?  How often do I treat the scriptures as an empty shell?  How often do I reckon them as simply a mental exercise—not fully permitting them to permeate me mind, body, and soul? 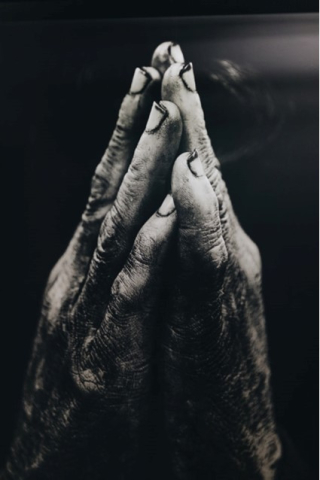 [photo by Nathan Dumlao on Unsplash]

Here’s a good one.  With the Sadducees having much to lose, due to their positions of power (relatively speaking—the Romans were still on top), they needed order.  What do I think of as order?  Who or what do I think of as possibly disrupting that order?

Let us join with the Holy Spirit in resisting the powers that would hinder us.  We need not be very much deceived.