The first nine verses of Genesis 11 tell the story of the Tower of Babel.  We hear that “the whole earth had one language and the same words” (v. 1).  With that kind of unity, it looked like anything was possible!  The people moved to a plain, and at the town hall meeting, someone said, “Come, let us build ourselves a city, and a tower with its top in the heavens, and let us make a name for ourselves; otherwise we shall be scattered abroad upon the face of the whole earth” (v. 4).

The place erupted with cheering and for the entire night, they partied like it was 1999.  (Yes, an unexpected Prince reference.)

After the groundbreaking, things went pretty much according to plan.  There were a few setbacks, but the important driving force was the mission to make a name for themselves.  All other considerations were secondary.  In his article, “Mankind’s War against Humanity,” Yonason Goldson draws inspiration from Rabbi Samson Rafael Hirsch.  According to the rabbinical critique of the tower builders, “if a brick were accidentally dropped from the top of the tower, the people would weep over the futility of the labor invested to carry it up.  But if a worker lost his footing and fell to his death, no one gave him a second thought.”

Still, there was one observer who had a beef with what was going on, and it went beyond worker safety.  The Lord wasn’t happy with the overall vision of this construction project.  “Look, they are one people, and they have all one language; and this is only the beginning of what they will do; nothing that they propose to do will now be impossible for them” (v. 6).  The Lord made the decision to “confuse their language there, so that they will not understand one another’s speech” (v. 7). 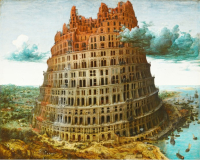 We might want to ask, “What the heck?  What’s wrong with everyone pulling together as a team?”  However, it wasn’t the unity which enriches that was guiding them.  As Goldson says, “The unity that should have uplifted humankind became twisted into a vehicle for corruption of the human spirit.  The solution was not to confound or confuse their language, as the popular translation suggests.  Rather, it was to mix together a multiplicity of words and thoughts so that understanding would become more elusive and, consequently, require more effort to achieve.”

A unity insisting on groupthink is a distortion.  Control of language and definitions is an effective means of controlling people.  When individual languages disappear, we lose the unique concepts and insights the speakers of those tongues were able to achieve.

Daring to question the party line, the approved ideology, can be hazardous to one’s health.  At the very least, it presents a golden opportunity to be shamed and excluded.  It seems that we today are not unlike that.  Thus we have, not a petulant deity, but a loving and liberating God who provides the blessing of “babeling.”  It is a blessing, not a curse, to be scattered and abandon “building the city” based solely on ourselves—not based on the justice and peace ultimately inspired by God.