Spirit of repair and renewal 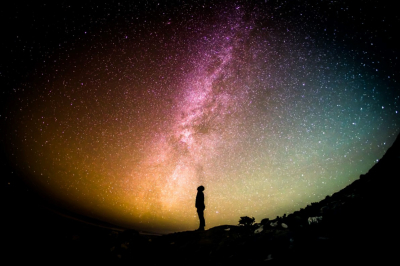 [photo by Greg Rakozy on Unsplash]

She spoke of a portal to heaven being opened.  She spoke of the Spirit covering the earth as the waters cover the sea.  I mentioned the book of the prophet Joel, which assures the outpouring of the Spirit “on all flesh.”

This pouring out has sons and daughters prophesying, the elderly dreaming dreams, and the young seeing visions.  There is a note on male and female slaves also receiving the outpouring of the Spirit.  Maybe we can translate that to “everyone, both great and small”!

The promise of “all flesh” receiving the Spirit only refers to human flesh.  Is it possible the animal kingdom could also be intended?  I’m not sure.  I think the animals already have their act together.  It’s the human race that needs to be filled with the Holy Spirit of wind and fire—the wind to steer us straight and the fire to burn away the impurities.

Unfortunately, the church (at least, the church in the West), has rarely thought of creation and Pentecost, Earth and Holy Spirit, as going together.  Happily, that is increasingly no longer the case.

Regarding Joel, we really have no idea when his book was written.  Unlike many of the other prophets, there is no helpful mention of historical markers, such as who was king during that time.  There is, however, mention of a devasting ecological disaster—wave after wave of locusts have swept through and ravaged the crops.  The destruction has been frightful.

They are described in rather stark language.  “They have the appearance of horses, and like war-horses they charge.  As with the rumbling of chariots, they leap on the tops of the mountains, like the crackling of a flame of fire devouring the stubble, like a powerful army drawn up for battle” (2:4-5).

I think I’m safe in saying these critters are unwelcome guests! 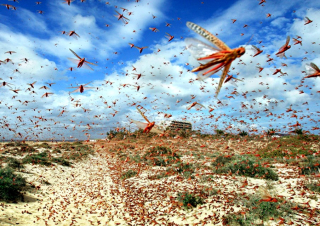 These locusts are seen as God’s call to repentance.  Joel doesn’t go into much detail as to what the people need to repent of, as some other prophets do.  He just speaks of disobedience in general.  An interesting thing is that this call to penitence involves nature itself—the invasion of locusts and the resulting devastation of the nation’s harvest.

Likewise, the sign of the salvation by God also involves nature.  “I will repay you,” says the Lord, “for the years that the swarming locust has eaten, the hopper, the destroyer, and the cutter, my great army, which I sent against you.  You shall eat in plenty and be satisfied, and praise the name of the Lord your God, who has dealt wondrously with you.  And my people shall never again be put to shame” (vv. 25-26).

Before he gets that far, the prophet has a message for creation itself.  He addresses nature.  “Do not fear, O soil; be glad and rejoice, for the Lord has done great things!  Do not fear, you animals of the field, for the pastures of the wilderness are green; the tree bears its fruit, the fig tree and vine give their full yield” (vv. 21-22).  When we look at the reading in Romans, I’ll say more about why I’ve highlighted this.

We might want to dismiss Joel’s speech as flowery symbolism.  He attributes emotion to his non-human, even non-living audience.  (At least, not living the way we think of it.)  Fear not!  Be glad and rejoice!

However, we are today understanding more about these things.  For example, there have been experiments in which rats have been observed consciously sacrificing themselves for others.  (I should add, that wasn’t the expectation at the beginning of the experiment!  No one actually thought the rats would give up their lives to save one of their fellows.)

In the recent movie, My Octopus Teacher (2020), the filmmaker befriends a creature that apparently has a high level of sentience.[1]  I’ll think twice before eating calamari again!  (And I do understand that calamari are squid; but they’re close enough!) 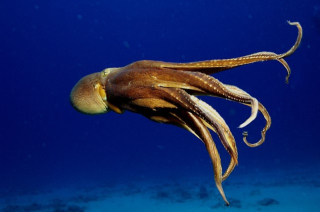 I grieve for trees that are cut down.  I see them as having some level of consciousness.

My point is that we too readily disregard our fellow earthlings.  Sometimes I think of war and the toll it takes.  Obviously, the loss of human life is both horrific and unnecessary.  When we go to war, it shows a failure of imagination and creativity.  Do we ever consider the mass murder we commit against animals and plants?

Actually, the Bible itself makes an issue of that very thing.  In the law of Moses, in Deuteronomy 20, there’s a section on the rules of warfare.  An environmental clause was inserted.  The Israelites are told, “If you besiege a town for a long time, making war against it in order to take it, you must not destroy its trees by wielding an ax against them.”

When an army lays siege to a city, it is blockaded.  Supplies are cut off, including food.  Sometimes the water supply is hindered.  The strategy is if the population is starved, denied vital necessities, eventually it will have to submit.

The verse goes on, “Although you may take food from [the trees], you must not cut them down.  Are trees in the field human beings that they should come under siege from you?” (v. 19).  I’m not sure how often that warning—that wisdom—was heeded.  We can learn a lot from it.  It’s an early version of the Geneva Conventions.

Now to my point about emphasizing addressing creation itself in Romans 8.  St. Paul speaks of the present suffering as not even close to the glory which will be revealed, adding that “the creation waits with eager longing for the revealing of the children of God” (v. 19).  The creation waits with eager longing.  There is an intelligence at work, an intelligence that yearns, and it yearns for the unveiling of God’s children.

I wonder how often we act like the children, the daughters and sons, of God in our care of creation.  We are reminded of that ancient command in Genesis 1 in which the human race was told to “have dominion over the fish of the sea, and over the birds of the air, and over the cattle, and over all the wild animals of the earth, and over every creeping thing that creeps upon the earth” (v. 26).  We should remember that there is a difference between dominion and domination.

There is a reason given for creation’s longing.  It has been “subjected to futility” (v. 20).  That word “futility” (ματαιοτης, mataiotēs) means “vanity” or “emptiness.”  One translation says, “creation was condemned to lose its purpose” (Good News Bible).  Of course, we’re the ones who lost sight of creation’s purpose!  We too often lose sight of our own purpose.

Verse 20 goes on to say the creation was subjected “not of its own will but by the will of the one who subjected it.”  As they ask in the crime novels trying to solve a murder, “Whodunnit?”  Who subjected creation to futility?  Was it we humans, or was it God?  Majority opinion goes with the latter.  It’s unclear why God would do such a thing.  One explanation is the ones put in charge by God—us.  We are the ones who screwed it up.

We dump plastic into the soil and into the sea.  We pave over the earth with reckless abandon.  We do chemistry experiments with our atmosphere, altering its composition.  We even inject ourselves with chemicals, the long-term effects of which we really don’t know.

Despite our failings as caretakers, God has made sure that the futility, the purposelessness, we have inflicted has been done “in hope.”  The story isn’t over.  Ultimately, despite our destruction (including self-destruction, God forbid), creation will endure.  Creation will be repaired and renewed.

I won’t into great detail about all of this groaning.  All of these “groaning” words are related to στεναζω (stenazō), which besides meaning “to groan,” also means “to sigh.”  The creation groans with labor pains.  We groan, awaiting our adoption, the final redemption of our bodies.  And that bit about our bodies is important.  Remember, in Jesus the Christ, God chose to be manifest in flesh—to appear in matter, to become part of creation.  Resurrection is not about the spirit; it is about the body.

Lastly, there is the Spirit, who helps in our weakness, not knowing how to pray as we ought.  The Spirit intercedes with sighs (as just mentioned) “too deep for words.”  Some say that refers to glossolalia, speaking in tongues.  However, speaking in tongues is an occasion of elation, as Paul says elsewhere.  In this context, the word is used as an expression of pain, of great discomfort.

The Holy Spirit grieves for us; the Spirit grieves for the creation.  Yet, as I said before, this is not the end of the story.  At this point, let me return to my original question I put to Banu.  That portal to heaven is open.  The Spirit is poured out as the waters cover the sea. 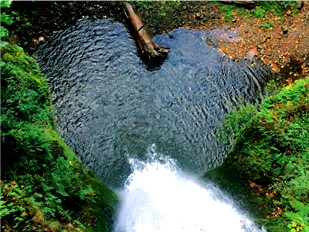 [photo by Melissa Askew on Unsplash]

Our duty, our calling, our joy isn’t simply to each other.  The gospel, the good news, goes throughout all the earth.  “God so loved the world (the cosmos)…”  Pentecost is a powerful reminder of the awesome privilege we have.  God issues the invitation to join in repairing and renewing the world.