Home Wellspring
in the system, but not of the system
embezzling the Spirit

Have I ever mentioned that I like Star Trek?  I begin with Star Trek because at times I’ve told people it has served to illustrate a theological point!  Let me explain what I mean by describing a certain episode.[1]

One of the characters in Star Trek: The Next Generation is Lieutenant Worf; he is a Klingon.  Klingons are a race, who in the original series in the ‘60s, were bitter enemies of humans.  However, by the time we get to this series, which aired in the late ‘80s and early ‘90s, the cold war was winding down.  And with art imitating reality, the Federation and the Klingon Empire had signed a peace treaty.

Anyway, Worf leads an away team to explore a planet.  One of the team members, an archaeologist, accidentally triggers a bomb from a war that ended centuries ago.  (It’s kind of like the way we use land mines.)  Sadly, the woman is killed, leaving a young son who already had lost his father.  The boy, Jeremy, is orphaned. 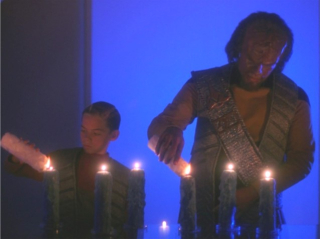 As the mission leader, Worf feels responsible for the death of his mother.  Worf himself was orphaned at a young age.  He invites the boy to join him in a Klingon ceremony called the R’uustai, or in English, “the bonding.”  (It consists of lighting special candles and uttering certain Klingon words.)  In this way, their families will be joined, and each will become stronger.

Watching that show, I saw an example of ritual for the Klingons.  Ritual enables them to handle these difficult moments, these great transitions.  By inviting the young boy to join him in the R’uustai (as well as explaining its meaning), Worf helps Jeremy deal with his loss.  Jeremy is given a framework, a frame of reference.  It helps him begin the process of healing.

Ritual is important, not just for Klingons in a fictional universe, but also for humans in ours.  Weddings, funerals, graduations—these and many other occasions all involve ritual.  They involve us in words and deeds that carry meaning.  In these life transitions, we don’t have to start from scratch.  We have something to work with.

Today we celebrate a ritual, the sacrament of baptism.  It also involves a bonding, as well as a welcoming into a family. 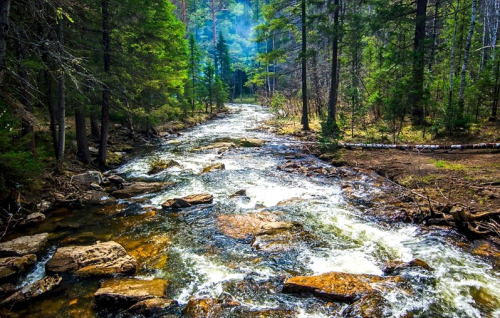 The water in this font has a powerful lineage!

Speaking of power, our New Testament scripture is part of the reading for the Baptism of the Lord, which we celebrate in January (Mk 1:9-11).

John the Baptist has told the people who have come to him, “The one who is more powerful than I is coming after me; I am not worthy to stoop down and untie the thong of his sandals.  I have baptized you with water; but he will baptize you with the Holy Spirit” (vv. 7-8).

“In those days,” as we’re told, Jesus comes along and presents himself to John.  Mark’s version is brief; we don’t see John’s hesitation to baptize Jesus that we see in Matthew’s telling.  We do, however, see the heavens ripped open and the Spirit descending like a dove and landing on Jesus.  There is a celestial voice claiming him as “my Son, the Beloved, with you I am well pleased” (v.11).

This is the anointing of Jesus; the Spirit is poured upon him.

At my own baptism, nothing quite so spectacular happened, that is, visibly or audibly.  (At least, no one told me they heard voices coming from above!)  I can say I felt as if a weight had been lifted.  For a good bit of time, my mother told me I should be baptized.  At first, I resisted.  But when I made that public statement of joining with the people of God, by bonding in that ritual of water, everything changed.  I was a new person; I had embarked on a new life.

Here’s some more from our Book of Order: “Baptism is the bond of unity in Jesus Christ…  Both believers and their children are included in God’s covenant love.  The baptism of believers witnesses to the truth that God’s gift of grace calls for our grateful response.  The baptism of our young children witnesses to the truth that God claims people in love even before they are able to respond in faith.  These two forms of witness are one and the same Sacrament.”

[Someone displaying the shirt he wore at his baptism.]

I was baptized as a believer, at age 21.  Our young candidate is being baptized as an infant.  We both receive the bond of unity, the bonding in water and Spirit, in Jesus Christ.  We both are welcomed into the family of God, as children of the covenant.

In a few moments when the water is sprinkled (or maybe poured!) on her, she won’t simply be a wet child—she will be the newest citizen in the kingdom of God.