Home Wellspring
idolatry and tyranny
to hell and back

I have a little story regarding my first experience of Ash Wednesday.  I was a freshman at a Roman Catholic university in Texas.  Mind you, I wasn’t interested in the Catholics or church in general.  One day, I was eating lunch with a friend in the cafeteria.  I mentioned how there were some students walking around with a black mark on their foreheads.  I thought it was funny.

My friend said simply, “Well, it’s Ash Wednesday.”  I had absolutely no idea what that meant.  He had a quizzical look on his face.  I had a blank expression on mine—but at least I wasn’t a hypocrite! 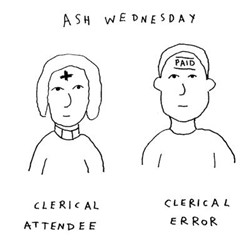 I’m about to do something which is not exactly authoritative, and that is, to define a Biblical word in English.  Here’s what the Merriam-Webster Online Dictionary says about “hypocrite”: number 1, “a person who puts on a false appearance of virtue or religion,” and number 2, “a person who acts in contradiction to his or her stated beliefs or feelings.”[1]

When Jesus disapproves of the hypocrites, is he thinking of our current-day idea of the word?  If Jesus is saying that we need to practice what we preach, then, as challenging as that may be at times, it still seems like something we can get a handle on.  And if we can’t, there’s usually somebody else who’s willing to point out where our words and deeds don’t match up!

I started thinking about the word “hypocrite” when I noticed the translation in the Anchor Bible.  In all three places where most English versions read “the hypocrites,” it reads “the overscrupulous.”[2]  That puts a different spin on the passage.  It sounds like what Jesus has in mind aren’t those who are frauds, but rather, those who want to “demonstrate their spiritual superiority.”[3]

Our word “hypocrite” comes from the Greek ύποκριτης (hupokritēs).  It originally meant “interpreter” or “one who explains.”  Later, it took on the meaning of “actor,” like one who performs in a play.

It’s this definition of “actor” that was the commonly understood meaning of the word for centuries.  So there wasn’t really a derogatory sense associated with being a hypocrite.  It wasn’t an insult.

It appears that it’s only well after the New Testament era that “hypocrite” takes on that negative meaning.  That is, of people pretending to be something other than what they are, of not practicing what they preach.[4]  So Jesus is saying, “whenever you give alms”… “whenever you pray”… “whenever you fast”… don’t be actors.  Don’t play a role.

What reward do actors receive—or at least, hope to receive?  Actually, Jesus tells us: “so that they may be praised by others” (v. 2).  Actors, and performers in general, want to be applauded; they don’t want to be booed.  Anyone who’s been on stage, be it for a school play or doing the halftime show at the Super Bowl, can tell you that.

If that’s all you want your life to add up to—the acclaim given to actors, to hypocrites—that’s fine.  But Jesus suggests something much better.  “Do not store up for yourselves treasures on earth, where moth and rust consume and where thieves break in and steal; but store up for yourselves treasures in heaven, where neither moth nor rust consumes and where thieves do not break in and steal” (vv. 19-20).

A life that only has the symbolic fifteen minutes of fame, in the end, isn’t much of a life.  Jesus concludes, “For where your treasure is, there your heart will be also” (v. 21).  So where is our treasure?  Where is our heart?  And what does that mean for us tonight? 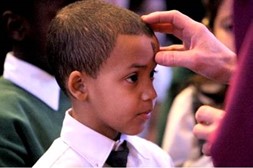 Still, on this Ash Wednesday, perhaps we don’t need to be reminded “we are dust.”  We’ve witnessed plenty of dust this past year.  We don’t need to act.  Maybe in some bizarre, unwanted way, this is a gift; it is a grace.  How could that possibly be the case?

We are especially reminded that our prayer, just as with giving of alms (giving in support of others) and fasting, isn’t for show.  We are told, “go into your room and shut the door.”  That is where we get our inner strength, “in secret” (v. 6).  And thus empowered, we can display it openly.