Home Wellspring
it seems so irrational
fear the poor

“You can’t go home again.”  We’ve all heard that one.  You can’t go home again.  Why not?  I go home on a regular basis.  (By regular, I mean at least once per year.)  Home for me is Tennessee.  (That is, it’s my second home.  My first home is wherever Banu is!)  Tennessee is where my mom and sister live.  Home includes both space and time.  Every time I return, things have changed.  There are new stores and restaurants.  Some stores and restaurants Banu and I liked have disappeared.  (A couple of examples include the breakfast place, “The Egg and I,” and a lovely gyro place owned by an Egyptian family.  We do miss that place—and them.)

Of course, who knows how long it will be before we can enjoy sitting in a restaurant? 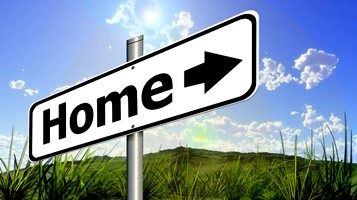 More fundamentally, “you can’t go home again,” refers to memories: of people, of events, of good times and bad times.  For some people, home never really felt like home.

Regarding not being able to go home again, think of Jesus in Matthew 13.  He goes back to Nazareth and is teaching in the synagogue.  There’s no problem with that, right?  Wrong.  The people look at each other; they look at him.  Where is he getting all this stuff?  Son, we know your family.  You weren’t raised to be some kind of philosopher.  The scripture says, “And they took offense at him” (v. 57).

In Genesis 32, we see another fellow trying to make his way home: Jacob.  He has left his Uncle Laban, and not on the best of terms.  Let’s go back many years, and briefly sum up.  Jacob leaves home in a hurry because his brother Esau sees red and wants him dead.  Jacob has been up to his trickery.

(And if you recall, along the way he has his vision of a stairway to heaven!)

As he approaches Laban’s place, he sees Rachel, who we’re told is really good-looking.  There’s also her older sister, Leah, who apparently is not quite as good-looking.  Laban says, “Work for me for seven years, and you can marry Rachel.”  Seven years go by and Laban says, “Oh, I just remembered.  The older sister has to get married first.”  Seven more years go by.  (I wonder how Jacob’s relationship with his father-in-law has fared!)

In time, Jacob figures out how to arrange for his goats to breed and become stronger, while Laban’s goats are the weaker ones.  He’s back to his shenanigans; maybe he feels justified this time.  Anyway, Jacob is found out, so he takes his family and possessions and hits the road.

There’s one little obstacle between Jacob and his destination—Esau, his aggrieved brother.

My obstacles in going home have been along the lines of road construction, a traffic accident, or bad weather.  I can’t claim to have ever had a family member blocking the path.  (That’s a claim I wouldn’t want to make!)  And I must confess, as I’ve gotten a bit older, stops at rest areas have become more frequent, as Banu will testify. 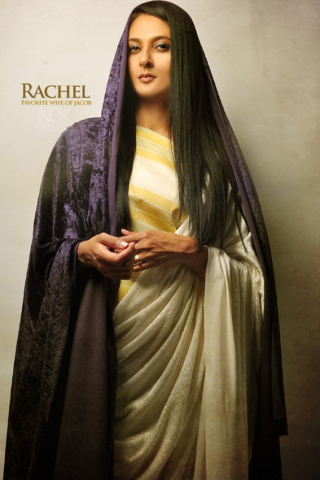 As I said, it’s been many years since he last laid eyes on his brother.  Jacob wonders, “What will he do when he sees me?  How will he feel?”  Jacob decides to err on the side of “furious.”  He sends some of his guys ahead to take Esau’s temperature, so to speak.  When they return, they tell Jacob that Esau is on his way—and incidentally, he has 400 men with him.

We’re told that Jacob “took his two wives, his two maids, and his eleven children, and crossed the ford of the Jabbok.  He took them and sent them across the stream, and likewise everything that he had” (vv. 22-23).  He has everyone go first, including his beloved Rachel.  I wonder how she felt being used as a human shield.

Jacob has sent everything and everyone away.  He is all alone.  He is all alone in the darkness of night.  I imagine we can relate to that.  I’m sure there have been nights in which it seemed like dawn would never arrive.  We’re left with our thoughts, our fears, our hopes.  And we are struggling.

For Jacob, that struggling is quite literally true.  He is wrestling with a mysterious man all night long.  Who is this man?

Nancy deClaissé-Walford, who teaches at Mercer University, has some suggestions.  “Theories abound concerning the identity of ‘the man’ with whom Jacob wrestled.  Was the man God? Was it Esau?  Or was it Jacob’s own inner being wrestling with itself?”[1]  She favors that last one.  Maybe there are hints of all three.  Maybe it was his fear of Esau—I don’t believe it was the man himself.  There was certainly that inner struggle, that inner conflict.

It was all wrapped up in Jacob’s wrestling match with God at the Jabbok stream.  It might be helpful to know that the Hebrew words for “Jabbok” (יַבֺּק, Yabboq) and “wrestle” (אׇבַק, ’abaq) sound very much alike.  We have a showdown at Wrestle River.

So what happens when dawn finally comes?  Jacob’s combatant hasn’t been able to pin him.  But before the match can end with the ringing of the bell, he gets one more whack at Jacob.  He sucker punches him in the hip socket, and it’s put out of joint.  Consequently, Jacob walks with a limp.  It sounds like Jacob needs hip replacement surgery!  Still, he is hanging on to his opponent, and he’s demanding a blessing.

After that long night of struggle, that long night of inner struggle, Jacob is still hanging on.  We’re told, “Jacob wrestled and received a new blessing (not one obtained by trickery, but this time by honest struggle).”[2]  Jacob is given a new name.  Says the man, “You shall no longer be called Jacob, but Israel, for you have striven with God and with humans, and have prevailed” (v. 28).

Terence Fretheim has an interesting take.  “God may encounter people in conflictual times by taking the very form of the anticipated difficulty.”  I find this interesting.  [quoting Walter Brueggemann[3]]  “‘In the night, the divine antagonist tends to take on the features of others with whom we struggle in the day.’”[4]

I’ve heard it said that dreams prepare us for similar events in the waking hours.  They prepare us for life.  (I’m not sure how I feel about that.  I imagine I’m not alone in wanting to avoid a lot of the stuff that happens in dreams.)

Of course, this is about more than dreams.  He continues, “Having been through such a time with God provides a gracious rehearsal for the actual life circumstance.  To refuse to engage with God in that struggling moment denies oneself a God-given resource.”

It’s said, “The only way out is through.”  Encounters with God, and by virtue of the Holy Spirit within, encounters with oneself, can be annoying, fearful, painful—and yet, not without a certain joy and revelation of love and grace. 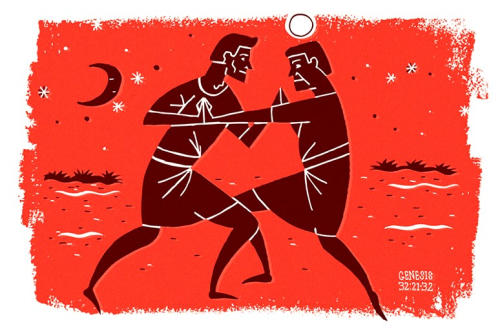 Jacob has traveled that path and made the awesome discovery: “I have seen God face to face, and yet my life is preserved” (v. 30).

Still, there is that limp!  He has been injured, and he will carry that injury, that scar.  Nevertheless, that dislocated hip is a sign of grace.  It is when we are weak that we are strong.  That area of vulnerability, whatever it is, is where God can especially work in our lives.

Last spring, I spoke of my surgery to remove a brain tumor, and I spoke of the scar left behind.  What I didn’t mention were the changes that experience made.  I came to new insights and understandings of people who suffer mental problems.  (Actually, for me, that wasn’t too much of a stretch!)

The steroids I was taking gave me a glimpse of those with wild mood swings.  (I’ve never been accused of that.)  Here’s one quick example.  One year when we lived at the seminary, people were decorating for Christmas.  I was upstairs in our apartment, watching Star Trek.  Banu, who was with two of our female friends, called and asked me to come down and help them hang a decoration.  As I descended the stairs, I became angrier and angrier.  How dare they take me away from Star Trek?

I noticed they had a ladder poised at the spot.  Any of them could have easily climbed up and attached the decoration.  They didn’t need me to do it.  I gave them the silent treatment.  It was clear how incensed I was.  Later on, I apologized for my unwarranted behavior, explaining about the steroids.  One of them replied, “Now you know how PMS feels.”

Understand, I’m not saying God gave me the brain tumor, but it could be seen as my own wrestling match.  I still carry that limp.  It wasn’t a foregone conclusion that I would learn anything. 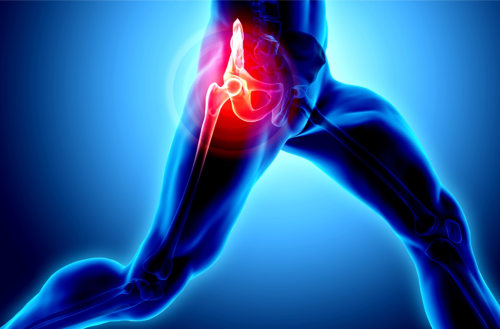 One way in which we all are going home is the return to our church sanctuary.  There are precautions to take, based on New York state guidelines, the CDC, and no doubt most of all, our calling to love one another—to love our neighbor.

As we go home, how have we been struck on the hip socket?  How are we limping?