When I was a little kid, the epistle of James held a special attraction for me.  (Can you possibly guess why?)  Please understand, the fact that I found it interesting doesn’t mean that I really knew what it was about.  I didn’t understand it any more than I did the rest of the Bible.

If we have to think of a term that sums up James’ message—or a category that we might use—it would be “wisdom.”  Other books in that category are Proverbs and Ecclesiastes.  James is a fount of wisdom.  In chapter 1 he counsels us, “If any of you is lacking in wisdom, ask God, who gives to all generously and ungrudgingly, and it will be given you” (v. 5).

Too frequently, I find myself in that category: “lacking in wisdom.”  I need help in choosing wisely.  In Biblical thinking, wisdom is more than a measure of intelligence; it also involves character.  It’s a question of what someone values, where someone’s heart is leading them.  In that regard, it also involves courage.

I imagine we all can think of cases in which even a Ph.D. education fails to include some common sense, as well as a decent, compassionate spirit.  And on the flip side, there are those who cannot read or write, but who have an understanding and perception that just astonishes.  These are people who are truly centered.  They use the wisdom that comes from the God who created them.

James isn’t very impressed with those who believe something in theory, but never put it into practice.  I’ll confess that that’s one of my struggles.  Sometimes I have a great idea but translating that into meaningful action is a totally different thing!  (Banu often helps me in that regard!)

“My friends, you believe in our Lord Jesus Christ who reigns in glory and you must always be impartial.  For instance, two visitors may enter your meeting, one a well-dressed man with gold rings, and the other a poor man in grimy clothes.  Suppose you pay special attention to the well-dressed man and say to him, ‘Please take this seat,’ while to the poor man you say, ‘You stand over there, or sit here on the floor by my footstool,’ do you not see that you are discriminating among your members and judging by wrong standards?”

We’re presented with the age-old problem of favoritism of the rich over the poor, as well as judging the book by its cover.  We may say, “Of course, everyone should be treated equally.  Who would disagree with that?”  But when we’re put to the test, a whole other thing might be the result.

Other religious traditions have similar stories.  Here’s one from 15th century Japan:[1]

“Once upon a time, the Zen masters teach, wealthy donors invited Master Ikkyu to a banquet.  The Master arrived there dressed in beggar’s robes.  His host, not recognizing him in this garb, hustled him away: ‘We cannot have you here at the doorstep.  We are expecting the famous Master Ikkyu any moment.’  The Master went home, changed into his ceremonial robe of purple brocade, and again presented himself at his host’s doorstep where he was received with great respect and ushered into the banquet room.  There, he took off his stiff robe, sat it upright at the dinner table and said, ‘I presume that it is my robe you have invited since when I first arrived without it a little while ago, you showed me away.’” No one is eager to admit to being apprehensive when confronted by someone in shabby clothes.

Still, it’s a role we play all the time.  I know I have played it too often.  When we lived in Jamestown, there was a certain lady I noticed walking through our neighborhood.  Even in warm weather, even hot weather, she would be dressed in a winter coat—and it was a grungy winter coat.  She looked “different”; she was the kind of person we’re “supposed” to avoid.

One time, as I was walking our dog, he noticed her and went right up to her.  She was very kind to him (and to me), and I wondered why I hadn’t bothered to speak to her before.  To my great shame, I must say I had made some pre-judgments concerning her.  Maybe I thought she would respond in some crazy fashion, or that she would ask me for money.  What a horrible thing that would be!

No, what our society tells us to do is to avert our eyes, to turn away from the poorest of the poor.  (When I say “us,” I’m especially referring to us proper, middle-class types.)  But when we give in to that temptation, we behave like the people James addresses in his letter.  What’s going on with that?  What’s behind the reluctance to engage with the poor?

Why do we too often suffer from aporophobia, fear and loathing of the poor?  (The Greek words for “poor” and “fear.”)

I’m reminded of a story that’s been told about Mother Teresa.  I don’t know how accurate it is, but it does reflect the way she lived her life.  Apparently, one day she was washing the wounds of a leper.  Someone who was watching said to her, “‘I wouldn’t do that for a million dollars.’  To which Mother Teresa replied, ‘Neither would I.’”[2] 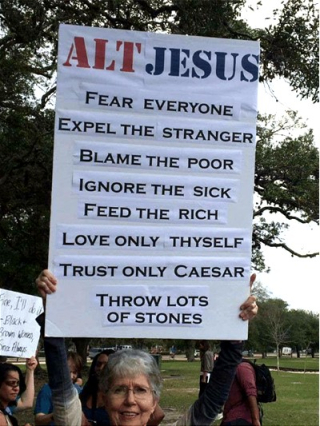 Sometimes I think that hesitation is similar to the reluctance we often feel in facing our own mortality.  (I don’t know about you, but in the dinner parties I’ve attended, death is rarely one of the topics for the evening’s conversation!)  Poverty reminds us of our limitations.  And we should be aware that poverty is about more than the lack of money, the lack of wealth.

The late Henri Nouwen did a good job of describing it:[3]

“When we are not afraid to confess our own poverty, we will be able to be with other people in theirs.  The Christ who lives in our own poverty recognizes the Christ who lives in other people’s.  Just as we are inclined to ignore our own poverty, we are inclined to ignore others’.  We prefer not to see people who are destitute, we do not like to look at people who are deformed or disabled, we avoid talking about people’s pains and sorrows, we stay away from brokenness, helplessness, and neediness.”

We all have a place of poverty.  We all are poor in some way.  To be honest, we are poor in many ways.  But it can be difficult to see it or to admit it.

Nouwen continues, “By this avoidance we might lose touch with the people through whom God is manifested to us.  But when we have discovered God in our own poverty, we will lose our fear of the poor and go to them to meet God.”

I find that last thought to be really compelling.  When we discover God in our own poverty, we lose our fear of the poor—and that is where we find God.  This seems to be so upside down, but God is rarely found in our successes.  There is too much of “us” in the way.

I’m talking about the God of Jesus Christ, whose life, by any reasonable accounting, wound up as a complete failure.  He was executed in a way reserved for the most despicable, most contemptible of criminals.  His disciples fled (that is, his male disciples fled.)  He was dead.

We fear the poor, because they represent all the stuff that we don’t want.  It sounds so backward, but that’s often the way that wisdom works.  The stuff that we try to deny and hide is where God longs to be found.  We’re asked in verse 5: “Has not God chosen the poor in the world to be rich in faith,” and furthermore, “to be heirs of the kingdom that he has promised to those who love him?”

James gives the scenario of finding out that someone is in need.  Speaking fine words like, “Go in peace!  Stay warm!  Make sure you get plenty to eat!”—but not taking steps to make that happen—is useless.  We can look at that from a different angle.  We can ask, “If our church were to disappear, would the community miss us?  Would our community be worse if we weren’t here?” 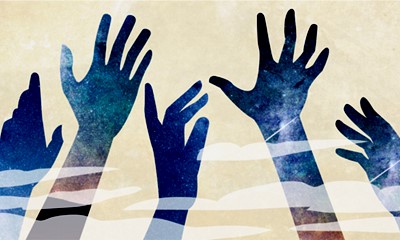 Especially now, is the community missing us?  How are we reaching out to those who are alone, lonely, disabled, missing human touch?  How will we be “the community” in this new normal?  I shared last week that it’s said we cannot go home again.  How can we create a new home—new sanctuary, both physically and virtually?  How can we present our poverty to result in an abundance of riches?

Even the smallest of steps—the most bumbling and clumsiest of steps—if it is done with the blessing of God, accomplishes far more than we can ask or imagine.