reset button—to hit or not to hit?

The epistle reading which is the final note of St. Paul’s farewell to the Corinthian church is to a church that has given him plenty of grief.  He’s had to get after them for being too lax, and then for being too strict.  They’ve split themselves up into competing factions; the rich among them have treated the poor with disrespect; they’ve chased after the latest fads; they’ve done these and many other things.  To their credit, one thing they have not been is boring!  But through it all, Paul has consistently guided them in, and to, the love and peace of Jesus Christ. 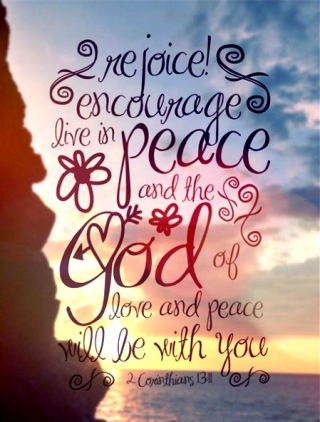 He starts by saying, “Finally, brothers and sisters, farewell.”  That word for “farewell” usually means “rejoice.”[1]  What would it mean for them to fare well with rejoicing?

The apostle has a list of instructions.  When he says, “Put things in order,” he’s not demonstrating OCD!  He’s not being a neat freak; he’s not commanding them to sort each other out.  But we’ll get back to that one in a few moments.

Secondly, his plea to “listen to my appeal” is a plea to learn humility.  That flows into his request when he says, “agree with one another.”  Paul’s not telling them to act like clones.  He wants them as best they can, to obey the law of love.  This will enable them to “live in peace.”

In verse 12, the apostle adds this: “Greet one another with a holy kiss.”  He says this in several letters.  This is where the “kiss of peace” and our “passing the peace” come from.  And for anyone who’s ever wondered why we usually do not kiss each other—besides concerns about inappropriate contact (not to mention the virus-imposed concern about transmission of disease)—there’s also the fact that fairly early in church history, they had similar concerns.  The liturgical practice of men kissing women who were not their wives, and women kissing men who were not their husbands, was abandoned.

I have a little story along those lines.  When Banu and I were in seminary, I took a worship class taught by a Presbyterian professor.  She gave us an assignment.  On Sunday, we were to attend a church with a worship service very different from the one we were used to.  There was an Armenian Orthodox church about a mile down the road.  (In case you didn’t know, there are a few differences between the Armenian Orthodox and Presbyterians!)

The entire service was in the Armenian language, except for the sermon and the prayer of confession, which were in English.  Included in their liturgy was the kiss of peace, the holy kiss.  The only other people in the pew where I was sitting was a family with a father, mother, and daughter.  She looked like she was about 20.  They started down the line, kissing each other on the cheek.  Then the daughter started moving toward me; I became a bit nervous.  She extended her hand, so a holy kiss turned into a holy handshake.  Potential drama averted! 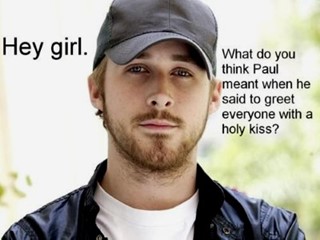 Paul ends the passage with a Trinitarian benediction, a triple blessing.  That’s why this is a scripture for Trinity Sunday.

What does the Holy Trinity mean in our lives?  There are many ways to go with this.  An image that might be helpful is seeing the Holy Trinity as the perfect community of love.  In this community, no one pushes the others aside.  No one tries to hog the spotlight; no one grumbles in the background.  That has ramifications for all of life, including the call to make disciples.  Then it won’t be just a song: they really will “know we are Christians by our love.”

That community of love has an even greater urgency today.  We’ve noticed how this strange new world in which we find ourselves, courtesy of COVID-19, has brought us to a relative standstill, though some places and some people are standing still more than others.  Each of us has taken notice of that reality, sometimes in quite trivial ways.  (I was alarmed when the NHL suspended its season!  But the alarm has turned to relief since they have decided to have the playoffs!)

Banu and I were discussing certain realities in the church.  We are aware that we are in an in-between time.  (We had interim pastor training several years ago, and never has it been more spot-on!)  What is happening now?  What will happen when “this” is all over?

In my Easter sermon, I addressed this very thing.[2]  “There has been much discussion about getting back to normal (post pandemic) and how long it will take before it happens.  I don’t believe it will ever happen.  If we somehow pretend to go back to the way things were, we’ll be fooling ourselves.  These events are happening; there’s nothing we can do to change it.  The question will be if we learn from this—if we allow the Spirit to teach us.”

Has a reset button has been given to us?  What would it mean to hit it?

Let’s go back to this business of “[putting] things in order.”  It’s probably best to read that as a passive instruction.  “Be restored to order.”  Be restored.  Permit yourselves to be set straight.

Permit me to include what I said in a blog post.[3]

It appears to be increasingly certain that this coronavirus is here to stay.  We need to make long term plans, not simply knee-jerk reactions.  Unless we are prepared for chaos around the globe (okay, maybe I’m exaggerating a little bit!), our economic, our political, and most of all, our spiritual mindsets need to change.

Is there any wisdom we can glean from Paul’s use of a single Greek word, καταρτιζω (katartizō)?  Surely “be restored to order” can be seen as applying, to not just our relationship with other humans (be they in the church or not), but to our relationship with the earth itself.  It better be—no, it must be—if we are to live within our calling to be stewards of God’s good creation.

It looks like global climate change has taken on a whole new dimension.  Planet earth is calling “timeout.”

Maybe hitting the reset button will become a daily exercise.  And to be honest, doesn’t that reflect teachings handed down through the centuries?  For example, the prophet Jeremiah wrote to the exiles in Babylon (who were facing their own strange new world), “seek the welfare of the city where I have sent you into exile, and pray to the Lord on its behalf, for in its welfare you will find your welfare” (29:7).  Every morning, when they woke up, they had to hit the reset button.  They had no choice.  Still, the prophet of God encouraged them.  He assured them that was the way to life.

If human history—if church history—is any guide, the changes we need to make are usually the ones forced on us.

Speaking of changes we need to make, I would be remiss if I neglected to address the killing of George Floyd and other unarmed black folks (especially young men) by the police and others.  Also we can’t ignore the violent opportunists who have turned peaceful demonstrations into acts of wanton destruction, even committing murder, and that includes murdering police officers.

I also can’t ignore what I saw—a man in his final moments of life, calling out for his mama.  In my bold, heroic gesture, I posted on Facebook the three words, “I can’t breathe.”  One of my Facebook friends responded with a series of question marks.  She wasn’t sure what I was referring to, so I said it was about the death of George Floyd.  Her reply: “that is why I am limiting my news exposure.”  I wasn’t sure what to do with that.  (And I have since taken down my post.)

In a way, I understand where she’s coming from.  This happens over and over and over again; it seems to be part of our history.  The names and faces just blur together.

So what can we make of how Paul wraps everything up?  What does it say about being restored to order?  “The grace of the Lord Jesus Christ, the love of God, and the communion of the Holy Spirit be with all of you” (v. 13).  Is it just a nice, tidy way to say goodbye?  William Loader says it is “a benediction which teaches us where the heart of the gospel lies—if we ever to stop to think what it really means.”[4]

Each of those terms is filled with meaning, but I want to focus on the third one: “the communion of the Holy Spirit.” 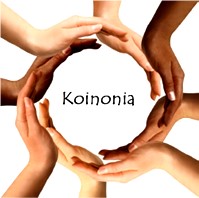 What does that mean?  One thing it surely means is that communion (in Greek, κοινωνία, koinōnia) is provided by the Holy Spirit.  Communion, fellowship, sharing—however you translate koinōnia—is a gift of the Spirit.  It is a gift given when we come together as the one body of Christ.

On the negative side—I’ll start with bad news!  We can participate in cynicism, a world-weary distrust, a feeling that nothing matters anyway.  We can share in prejudice, to literally “pre-judge,” be it by ethnicity, political orientation, some religious conviction, or someone’s favorite food.  We can surround ourselves with tribalism, which leads to fear and loathing of “the other,” whoever “the other” might be.

Okay, how about some good news?  What are some positive forces, life-enhancing atmospheres we can share, we can breathe?  The fruit of the Holy Spirit is a good starting point: “love, joy, peace, patience, kindness, generosity, faithfulness, gentleness, and self-control” (Ga 5:22-23).  We can enter into confident hope, as opposed to a world in which we always have to watch our back.  We can surround ourselves with humor.  I’m not talking about pointing and laughing, giving people derogatory, immature nicknames.

When we can laugh at ourselves, we allow an easy, joyful spirit to flow among us.  It opens the door to a spirituality of a graceful gratitude.  (Granted, some of us provide more material at which to laugh.  I see evidence of that every day in the mirror!)  I often say one of the sure signs we have been created in the image of God is a sense of humor.

We are told “Paul has expanded a traditional farewell to make it match a situation where community and compassion was largely missing.”[6]  The apostle is reminding the Corinthians that they need to get over themselves.  Hit that reset button!

For us here, regarding that reset button: “to hit or not to hit”—that is the question.  Like the exiles in Babylon, in their strange new world, perhaps we need to hit that button every day.  There’s no question we are facing challenges like never before.  Hitting the reset button daily might keep us sane!

Let me finish with a quote from Thomas à Kempis’ masterpiece, The Imitation of Christ.[7]  (With slightly different language in this particular translation.)  Maybe we can say this is his take on hitting the reset button.

That, my friends, is being restored with a triple blessing.