rich wounds, yet visible above

As you might have guessed, I have taken my title from the hymn, “Crown Him with Many Crowns.”  It’s part of the line, “Crown him with many crowns / Behold his hands and side / Rich wounds, yet visible above / In beauty glorified.”  That hymn isn’t usually sung on Easter, but there’s no law saying we can’t!

We’ll get to those rich wounds in a moment.

Our celebration of Easter this year is somewhat muted.  For many it is a great deal muted.  I’ve heard of some churches who plan to wait on celebrating Easter until they can return to their sanctuaries.  I suppose I would remind us that every Sunday, being the Lord’s Day, is a “little Easter.”  There are Christians all over the world who don’t have the luxury of a building on any Sunday.  My guess is they are celebrating the resurrection of our Lord today. 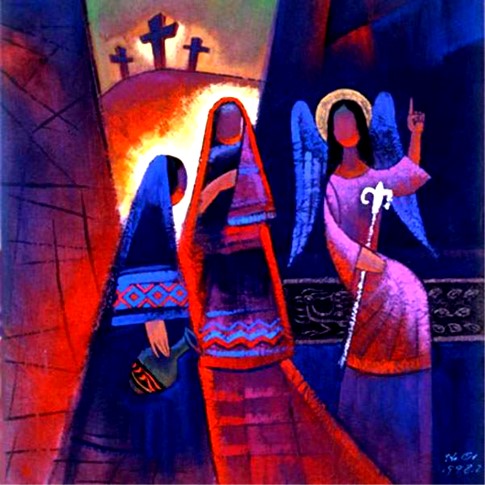 And unfortunately, there are still some churches who are doing business as usual.  Of course, if they keep doing that, my prediction is they will very soon not be doing any business at all!

Having said all that, I am well aware of how we, and the rest of the human race, are exploring uncharted territory, to use a considerable understatement.

And sadly, the coronavirus has struck our church family.

If the planet Earth itself was ever in need of resurrection, this is the time.

Jesus is risen from the dead.  Matthew tells us, “After the sabbath, as the first day of the week was dawning, Mary Magdalene and the other Mary went to see the tomb” (28:1).  They were in for the surprise of their lives.

There is the utter disbelief of his friends, not to mention his enemies.  Seriously, it was just too insane.  Still, the women were quicker to accept it than the men were.  In his version, Luke tells us the men’s reaction to the women’s report.  “But these words seemed to them an idle tale, and they did not believe them” (24:11).

I don’t know about you, but I for one am glad that men disbelieving women is a thing of the past!

To quickly summarize Matthew 28: the women find the stone blocking the tomb has been rolled away.  The guards are quaking in their boots.  An angel tells the women to go and report what they saw, but on the way, Jesus appears to them.  When the priests hear the story, they engineer a coverup.  The disciples go to Galilee and meet the risen Jesus.  He gives them what has come to be known as the Great Commission.

“All authority in heaven and on earth has been given to me.  Go therefore and make disciples of all nations, baptizing them in the name of the Father and of the Son and of the Holy Spirit, and teaching them to obey everything that I have commanded you.  And remember, I am with you always, to the end of the age” (vv. 18-20). 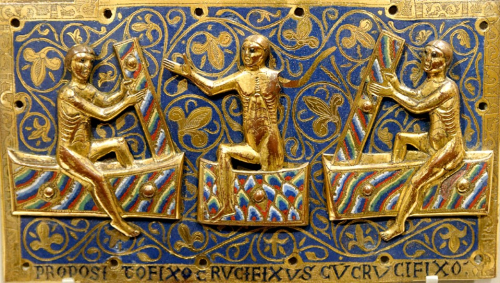 A scripture passage often used for funerals is 1 Corinthians 15, Paul’s chapter on the resurrection.  A question that gets him started is this: “Now if Christ is proclaimed as raised from the dead, how can some of you say there is no resurrection of the dead?” (v. 12).  Later he deals with the questions, “How are the dead raised?  With what kind of body do they come?” (v. 35).

How do we describe the resurrection body?  Paul says that “this perishable body must put on imperishability, and this mortal body must put on immortality” (v. 53).  I’ll be honest: that really doesn’t help me much!  I have trouble envisioning what that looks like.

Someone who could probably identify with that is Thomas, the so-called “doubting Thomas.”  He wasn’t there when the risen Jesus appeared to his friends.  They say he showed them his hands and side—the hands and side pierced with nail and spear.  He doesn’t believe them, but a week later he does.  Jesus again appears to them, and he shows Thomas that he is real.

Through the ages, people have painted Thomas, not so much as a bad guy, but one who needs a major faith adjustment!  Is it possible that the idea of a resurrected body (as difficult as that is to swallow) still bearing wounds is even more of a stretch?  Here’s where we return to that “rich wounds, yet visible above” business.

The resurrection body of Jesus, who defeated death and the grave, still has scars!  I find that remarkable.  At first thought, we might expect his body, risen from the dead, to be in immaculate condition.  Does God do things by half-measures?  Why not have complete healing?

Perhaps the resurrection body of Jesus models what it means to be scarred.  Maybe it was a way of showing the disciples that it really was him.  They weren’t encountering a ghost; they weren’t having a vision.  So his wounds were a method of identification.

Back to the idea of an immaculate, a flawless body—God not employing half-measures.  What better way to identify with we humans, to be plunged into human flesh, than to honor it?  Jesus, more than anyone else, understood what it meant to be “the man of sorrows.”  By retaining the scars, Jesus honors the depth of what it means to be human.  After all, he was human!

There has been much discussion about getting back to normal (post pandemic) and how long it will take before it happens.  I don’t believe it will ever happen.  If we somehow pretend to go back to the way things were, we’ll be fooling ourselves.  These events are happening; there’s nothing we can do to change it.  The question will be if we learn from this—if we allow the Spirit to teach us.

Maybe you’ve seen images from around the world what the reduced use of pollution-causing activities has done.  I saw a report on how, in northern India, the reduction of pollution has enabled residents to see the Himalayas, 200 kilometers away (about 125 miles).[1]  Someone commented, “We can see the snow-covered mountains clearly from our roofs.  And not just that, stars are visible at night.  I have never seen anything like this in recent times.” 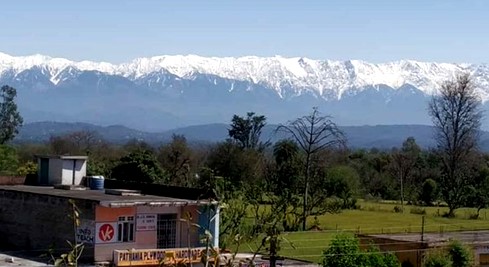 And it’s only taken a worldwide disaster to get it done!

Shelly Rambo, who teaches at Boston University School of Theology, has written extensively on trauma.  Something she says about trauma is that it marks “a ‘new normal’ in that there is no possibility of the person returning to who they were before.  A radical break has occurred between the old self and the new one.”[2]  The challenge for one who’s undergone trauma is how to “[integrate] the experience into their life.”  That’s true for us all.  That’s true for us as the church.

We see many reactions to this unwelcome viral visitor, just as we do with other calamities.  One of the most common is one I think we all have had, in one way or another.  We believe God has sent the disease or the storm or the accident or whatever.  Is it God’s will?  Is it a test?  Is it a punishment?  Is it a cruel cosmic joke?

Our scars do not define us.  We all bear scars, be they visible or invisible.

Yes, the scars can be visible.  They might be scars from accidents or surgery.  Maybe we’ve been harmed by others.  Maybe we have harmed ourselves.

And yes, the scars can be invisible.  They might be the result of a constant drumbeat of insults, of ridicule.  Maybe we’ve been rejected because of the way we were born.  Scars can be left—left because of self-deprecation, self-doubt, self-hatred.

But that takes us back to the glorious nature of this day.  Rich wounds, yet visible above—in all the ways “above” can mean.  In beauty glorified.  Jesus Christ looks at us, and he sees in our wounds something beautiful.  Our scars are beautiful.

[Even this guy’s scars are beautiful?]

The good news of this Resurrection Day is that the Holy Spirit empowers us as we mark our life forward.  We testify today we as the body of Christ, though wounded we may be, are empowered to say the devil, the grave, that which would harm us, does not have the last word.  Our risen Lord journeys with us as we declare with a holy boldness: