we are not dead

Ezekiel is one of those prophets with whom most people never become familiar.  He seems too remote, too odd.  What can we say about a book that starts with a vision in which the prophet sees images of creatures flashing like lightning, with wheels all around?  Some people swear he saw a spaceship. 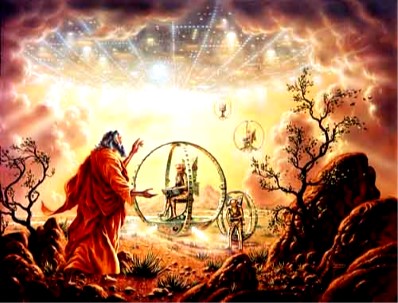 And he often behaves in ways that are just flat-out weird.  He builds a model of Jerusalem and then smashes it to bits.  He shaves his head and beard and then publicly burns the hairs.  Ezekiel doesn’t lend himself very well to Sunday school.

Still, he does have an admiring audience.  People come to listen to him.  However, as the Lord says, “To them you are like a singer of love songs, one who has a beautiful voice and plays well on an instrument; they hear what you say, but they will not do it” (33:32).

At the start of chapter 37, Ezekiel has a vision in which he finds himself in a valley filled with bones, and indeed, they are not connected.  They’re strewn all over the place.  He examines them and finds that they’re completely dry.  These folks died a long time ago.  The Lord asks Ezekiel, “can these bones live?”  What kind of answer can he give?  It doesn’t look like anything alive could emerge from that dismal scene.  Still, he knows not to limit the power of his God.  All he can say is, “You know, Lord.”

To really understand Ezekiel, we need to take a step back and look at his world.  He lived through one of the true turning points of Biblical and world history.  The Babylonian Empire has become a superpower, and by the year 597 (B.C.), after sweeping through most of the Middle East, the Babylonians are ready to conquer Judah.  People who might be considered a threat are deported.  Ezekiel is part of the first group of exiles.  Thus, Ezekiel comes to live in Babylon.

For about eight years, Jerusalem has been occupied by the Babylonians, but they’ve refrained from destroying the city.  But then the Judahites try teaming up with the Egyptians to fight back.  That doesn’t work, and the Babylonians lose their patience.

As a result, the unthinkable happens.  The temple is destroyed.  It’s difficult for us today to understand the crushing blow that was.  They couldn’t imagine the temple being destroyed.  There’s no way God would allow it.  They had a trust in the building—a superstitious trust, as it turned out.  They trusted in a building, but they didn’t trust God.  They constantly broke the covenant with the Lord.  They served other gods.  They oppressed the poor.  They were corrupt.

And so we arrive in the valley of dry bones. 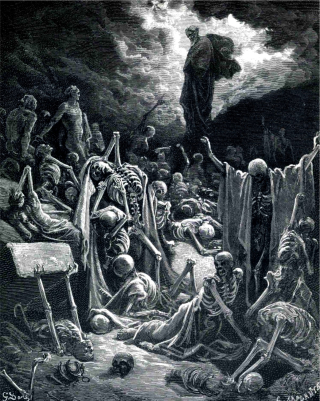 There’s a Hebrew word that appears over and over throughout today’s reading: רוּחַ (ruah).  It’s translated by three words that best capture its meaning: breath, wind, or spirit.

We see in Ezekiel’s vision the creative use of the word.  First he’s commanded to prophesy to the bones, as our little song puts it, he’s to say to “dem dry bones…hear the word of the Lord.”  Suddenly the bones reassemble, with sinews, flesh, and skin reappearing.  Still, the bodies are dead.  Then the Lord tells Ezekiel to prophesy to the breath, to call out to the wind, to speak to the spirit.  It’s only then that ruah enters the bodies, and they come to life.

The exiles, defeated and taken captive far from their homeland, truly were dispirited.  They felt they were as dead as those dry bones.  With the news of the temple’s destruction, Ezekiel’s job has changed.  He’s been calling for repentance; now he must offer hope.

When the people felt that all was lost, that their enemies had vanquished them, the prophet came to them and told them of the promise of the ruah of the Lord, of the Spirit of God, which would revive them, which would bring them back to life.

So what does this vision of hope given to a group of exiles 25 centuries ago in Babylon say to us here today?

Do we need to be brought back to life, like Lazarus?

We’ve all had our own experiences with the virus.  Some have had truly dreadful experiences.  Others—not so much.  I have this feeling that there’s something out there, and it has ill intent.  I know I’m not the only one who feels that way.  Wouldn’t be nice if we could actually see the virus?  That would make things much easier!

Still, we’re here.  The crowds asked John the Baptist after his message of repentance, “What then should we do?” (Lk 3:10).  What should we do?  Let me ask the question from a different angle.  What opportunities await us?

Remember what I said regarding the news that the temple had been destroyed.  The prophet had been calling for repentance.  Now it was a time for hope. 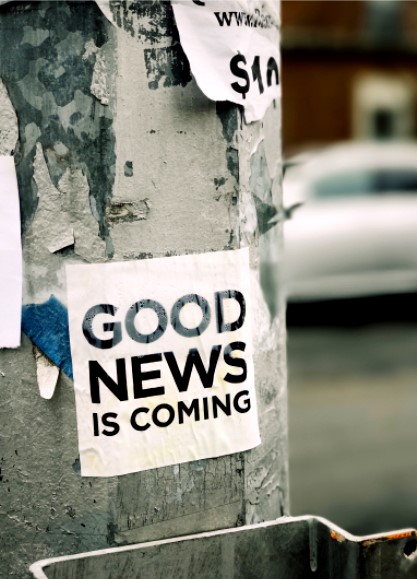 [photo by Jon Tyson on Unsplash]

Well, the temple has been destroyed.  We’re in the valley of dry bones.  Ezekiel’s vision is about a promise of return from exile.  It will be a second exodus.  What can these bones do, given a new life?  The breath, the wind, the spirit of God is still blowing.  We have the opportunity—we have the option—of allowing that wind to carry us to a new way of being.  Or maybe it’s a question of regaining what we’ve possibly allowed to lapse.

Here’s another question.  How will we emerge from this?  Will fear win the day?  So much of what we see in the media, in my opinion, borders on sensationalism.  Sometimes it seems like the goal is to inspire fear, to inspire panic, rather than level-headed caution.  I feel like some people would almost welcome mobs who are setting fires and smashing windows.

So that’s one option.  Here’s another.  Will we learn from this?  Will we work together?  Will we learn to care for each other?  I don’t expect heaven on earth, but maybe some heavenly spirit can take hold.  There is an opening for a deeper and more vibrant faith.