Home Wellspring
shining in the dark
zero the hero

do not break; do not extinguish

There’s a certain TV show from the 1970s that my mom and dad used to watch when I was a kid.  It was set in the 1870s: Kung Fu, starring David Carradine.

This was the premise of the show: we have someone with an American father and Chinese mother.  He is orphaned in China and raised by Shaolin priests.  After killing the Emperor’s nephew (who, by the way, just killed his teacher), he’s forced to flee the country.  He goes to the American west, in search of his brother.  As he travels, he opposes whatever injustice he encounters.  I always liked the way he spoke.  [very tranquilly]  “I am Caine.  I am called many names, but I have chosen ‘Caine.’”

I was reminded of Caine from Kung Fu because he has some qualities that are reflected in our reading from the book of Isaiah.  (I’ll elaborate in a moment.)  Caine’s life at the Shaolin temple has given him many skills.  In fighting his opponents, he does so with seemingly effortless action.  He presents the very image of a serene, almost pacifist, nature. 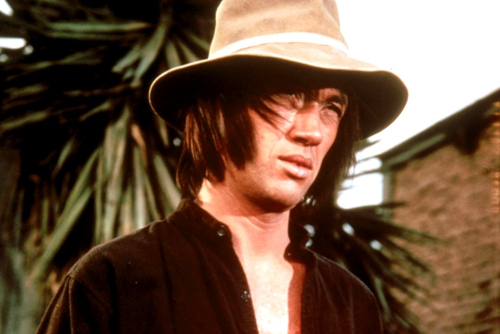 Isaiah 42 begins with the Lord declaring, “Here is my servant, whom I uphold, my chosen, in whom my soul delights; I have put my spirit upon him; he will bring forth justice to the nations” (v. 1).

This is the first of the so-called “Servant Songs” in the book of Isaiah.  There are three others.  Who is this special Servant?  Some say it’s the people of Israel as a whole.  Others say it’s the prophet.  Still others, reflecting a Christian interpretation, say this special Servant is none other than the Messiah himself.  I imagine all of those elements are involved.

Regardless of the Servant’s identity, there are, as I already suggested, some characteristics that this one possesses.  When I was reflecting on this passage, I was especially drawn to verses 2, 3, and 4.  The image I got was one of quiet perseverance.  As I said, that’s what reminded me of Caine’s demeanor in Kung Fu.

Verse 2 says of the Servant, “He will not cry or lift up his voice, or make it heard in the street.”  This one doesn’t seem to be very confident.  How can you get your message across if you’re not out there promoting yourself?  Doing book tours?  Going on talk shows?  Telling people to visit your website?

For the past few years, according to many reports, the fastest growing church in the world is the church in Iran.  We’re told, “What’s fascinating right now is that the most powerful leaders in Iran are women, but it’s not in a bombastic…way…  In fact, they are the most gentle women.  They are leading this movement, going out in the highways and byways sharing with prostitutes, drug addicts, with everybody they come into contact with, and that takes courage.  They are courageous women.”[1]

I don’t think these women can be accused of not being confident! 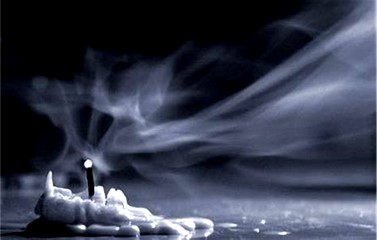 In verse 3 we learn that “a bruised reed he will not break, and a dimly burning wick he will not quench; he will faithfully bring forth justice.”  I like the way Bill Long puts it:

“How do reeds become crushed…?  By the forces of nature and of people.  Reeds become smashed because of storms and diseases, because of people stomping over them…  We are reeds, subject to the forces of life that we cannot control and that sometimes descend on us with frightening speed and mercilessness.  And so, we live our lives in a crushed condition.”

However, the Servant in Isaiah will not break a bruised reed.  He (or she) treads lightly on the earth.  Again, I’m reminded of Caine in the show Kung Fu.  When he was finally able to walk down a long length of very fragile rice paper without tearing any of it—leaving no trace behind—only then was he prepared to leave the Shaolin temple and go out into the world.

And about that “dimly burning wick,” Long says that “we are here compared to a wick which is…about ready to go out because the candle has melted…  We may appear strong…but if we know ourselves well, we know that there are lots of forces at work within and without that make us terribly vulnerable to [being extinguished]…  But the Servant won’t crush; the servant won’t extinguish.”

And the Servant will keep at it “until he has established justice in the earth; and the coastlands wait for his teaching.”  The word for “coastlands” literally means “islands” ( אׅי,’iy).  It refers to the ends of the earth.  That’s the kind of character we’re dealing with: not one who is feeble and fragile, but one who won’t get frustrated and quit!

I wonder, how do we compare?  That can be hard to answer for ourselves.  We can benefit from the insight of observers.  From time to time, my wife Banu has been willing to provide her observations to me.  And more often than not, I actually find them helpful!

This scripture reading about the Servant of the Lord is beneficial to us in one particular way, that is, when we ordain and install officers.

If there’s any confusion, a phrase from the old Book of Order clears it up.  (It’s one I wish they hadn’t deleted.)  This is it: “Those duties which all Christians are bound to perform by the law of love are especially incumbent upon elders because of their calling to office and are to be fulfilled by them as official responsibilities” (G-6.0304a).  How do you like that?  It’s official.  If being a Christian isn’t enough for us to follow the law of love, being ordained as an elder is part of the job description!

Of course, it isn’t simply a job; it’s an adventure.  It’s a lifestyle.  That’s true for anyone, whether ordained or not, who would take the Servant of the Lord in Isaiah as a model or a pattern.  It’s a lifestyle for anyone who senses the call, as verse 7 puts it, “to open the eyes that are blind, to bring out the prisoners from the dungeon, from the prison those who sit in darkness.” 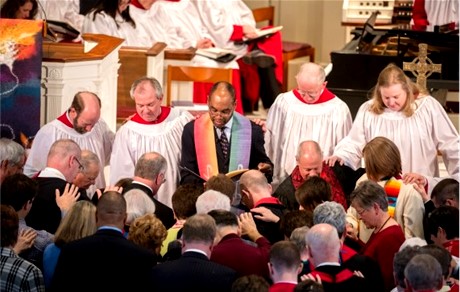 What does this calling to not break a bruised reed or to not extinguish a dimly burning wick look like?  As I’ve indicated, bruised reeds and dimly burning wicks are images of people who have been bruised and whose lights are fading away.  I have a few bruises myself, and sometimes my light burns rather dimly!  It’s been on the verge of going out altogether.

In answering that question about our calling to not break or extinguish each other, I’ll suggest something from a document approved by the General Assembly of the PC(USA) back in 1998, “Life Together in the Community of Faith: Standards of Ethical Conduct.”[2]  One of those standards refers to accepting the discipline of the church.

Accepting the “discipline of the church” might sound outdated or old-fashioned, like being chastised for playing cards.  It might even conjure up medieval images of being flogged or burned at the stake.  That’s not what I’m talking about!

Accepting the discipline of the church can be seen in a more basic way.  In Paul’s first letter to the Corinthians, he gives what might be considered a manifesto of church discipline.  He deals with many issues in Corinth, such as people splitting up into factions and being disruptive in worship.  Church itself requires discipline—it requires the discipline of love.  And love requires that we discipline ourselves!

Indeed, the section of our Book of Order called “The Rules of Discipline” includes the reminder, “The power that Jesus Christ has vested in his Church, a power manifested in the exercise of church discipline, is one for building up the body of Christ, not for destroying it, for redeeming, not for punishing.” (D-1.0102).

The discipline of “church,” if done well, gradually turns us into loving and kind persons.  If we abandon that discipline, or approach it in an unhealthy fashion, we become ungrateful and cause injury.  Can we help each other in our discipline and affirm with the apostle Paul that our “God is a God not of disorder but of peace” (1 Co 14:33)?

I recently watched a movie about Christians living among radical Islamists.[3]  (I don’t necessarily agree with all of the theology in it, but that’s okay!)  There’s one scene which featured an American missionary.  His name wasn’t given; I’ll just call him John.  He was wondering how much he would be willing to give up.  How much deprivation and abuse would he take for the cause of Christ.  He asked, “What is my price?”

Regarding the discipline of church, maybe we’re back to those medieval images I just mentioned.  I have to ask myself, “What is my price?”

John speaks of a friend who is also a missionary.  Again, his name wasn’t given; I’ll call him Peter.  Peter has a wife and two young children.  He admits that he and his wife have wondered if it’s fair to have their kids in such a dangerous place.  Acknowledging the danger, when they first arrived, he and his wife made a video.  It was an unusual video—they forgave the men who killed them!  That’s really reflecting the nature of Christ.

“Father, forgive them, for they know not what they do.”  That is some serious church discipline.

As insane as it sounds to us, those who are determined to break and extinguish with the worst possible methods are also loved by God.  But again, we ourselves do that to each other in less horrific ways. 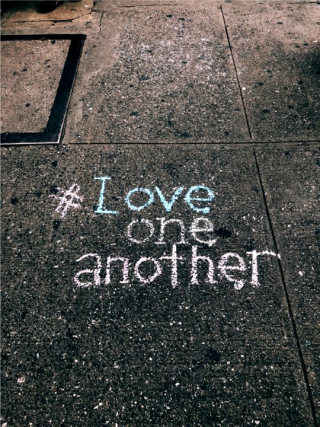 I want to close with a quote by Henri Nouwen on that very thing.  “A life of fifty, sixty, seventy, or a hundred years is just a little moment in which you can say, ‘Yes, I love you too’…

“That’s where ministry starts, because your freedom is anchored in claiming your belovedness.  That allows you to go into this world and touch people, heal them, speak with them, and make them aware that they are beloved, chosen, and blessed.  When you discover your belovedness by God, you see the belovedness of other people and call that forth.  It’s an incredible mystery of God’s love that the more you know how deeply you are loved, the more you will see how deeply your sisters and your brothers in the human family are loved.”