Home Wellspring
time to grow up?
crossing the bridge from anger to elation

Over a timespan of about fifteen years, I had a recurring dream.  I might even call it a nightmare.  It involved McDonald’s, where I worked when I wasn’t away at college.  In the dream, I would be at various locations.  I might be at home, or maybe I’d be driving my car.  And in the back of my mind was this nagging fear that I should be at work; I should be at McDonald’s.

In the dream, it was always the case that it had been days, even weeks, since I’d showed up for work.  I would have the feeling that I needed to go to the store and check the schedule.  Was I in fact supposed to be there?  But I don’t remember ever making that trip.  Instead, I would wake up and realize, with a great sense of relief, that I was now at seminary, or later on, that I was now pastor of a church. 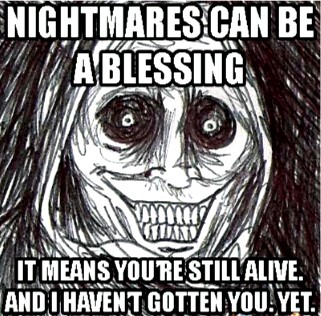 I haven’t had that nightmare for a long time now.  Banu once told me that I was subconsciously expressing my fear of working at McDonald’s for the rest of my life.  I believe there’s something to that!  At a deeper level, though, I think McDonald’s represented my sense of not moving forward.  It was a symbol of my feeling being trapped.

I say that because, after graduating from college, I worked there for over two years before going to seminary.  No doubt reflecting my Pentecostal influences, I was dead set on waiting for God to speak to me, to tell me what to do.  Lord, please give me a sign!  Give me a dream; give me a vision of what I need to do!

Please note, I’m not blaming the Pentecostals for my wrong-headed understanding.  That’s on me!

And of course, all the while, the Lord had implanted within me the calling that I needed to follow.  But I was resistant!

Maybe I would have been satisfied with what we see in the reading in Daniel.  We’re told that Daniel has a dream.

Starting with chapter 7, the last part of the book of Daniel is what’s known as apocalyptic literature.  (The word “apocalyptic” literally means a “revelation” or an “uncovering.”)  The book of Revelation is in that category.  (Surprise!)  Apocalyptic books are like movies with all kinds of weird special effects: dream worlds, cosmic calamities, and yes, scary monsters.

It’s been said, “One could say, calmly and rationally, that the world is a bleak and dangerous place, or one could make the point more fully and dramatically through apocalyptic fantasy.  The latter…will more quickly trouble and terrify us (as they did for Daniel), which is the point.”[1]

Think about it.  Even though the parables of Jesus and apocalyptic images aren’t exactly the same thing, they do serve similar purposes.

For example, Jesus could talk about grace and give us a definition.  He could call it “a free gift” or “an undeserved reward.”  He could do that, or he could tell a story about it—say, a story about a son who asks for his inheritance, shames the family, goes abroad and squanders the money, and after all that foolishness, after all those mistakes, is welcomed home with a lavish banquet.

I ask you, which of those makes a bigger impression?  Which one helps you to better understand grace?

And going back to those delightfully scary images, what would become of horror movies?  A documentary-style warning about the hazards of traveling alone on dark roads in the forest just doesn’t get the juices flowing.

So, even though apocalyptic language can be troubling and terrifying, that’s not the end of the story.  These images of mighty angels and stormy seas really do tell the story of God’s people being delivered from the foul beasts that would keep them down.  And those “foul beasts” are typically of the two-legged variety, the ones who walk around upright. 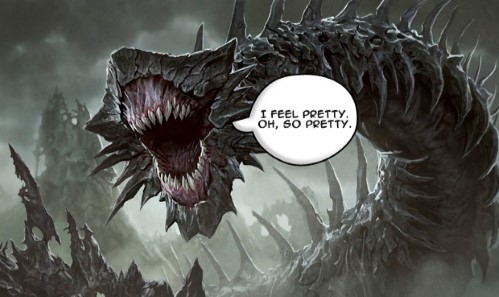 The reading in Daniel has been chopped up.  Verses 4 to 14 have been deleted.  The Old Testament is often dissected to suit the purposes of the church.  It being a text for All Saints’ Day, the lectionary zeroes in on verse 18.  “[T]he holy ones of the Most High shall receive the kingdom and possess the kingdom forever—forever and ever.”  Those holy ones are the saints!

Still, we need to pay attention to the dream—or should we say nightmare?  Daniel seems to think so.  Look at the way the chapter ends in verse 28: “I was so frightened that I turned pale, and I kept everything to myself” (Good News Bible).  He was so scared that he looked like he’d seen a ghost (and he probably soiled himself).  And he wasn’t going to tell anyone about it.

He sees four great beasts rising from the sea.  In ancient Hebrew thinking, the sea was a symbol of chaos.  Who knows what’s down there?  This is a symbol that is primordial.  It goes back to the chaos at creation.  This is “darkness [covering] the face of the deep” (Gn 1:2).  So, toss in the tempest, and you really do have some chaos!

There’s some question as to which kingdoms the four beasts symbolize.  People pick among the Babylonians, the Medes, the Persians, the Greeks, and the Romans.  The point is, all these empires in one way or another persecuted the Jews, the people of God.  Or in apocalyptic terms, they’re scary monsters that tried to gobble up the holy ones.

It can be difficult for us to realize how powerful this is.  Imagine the audacity of this powerless group of people.  They’re just one nation among many that have been swept up by the empire.  How dare they show this holy defiance?  How dare they tell their own stories?  They’re supposed to agree with the official version of history, one that lets them know they’re less worthy, one that puts them in their place.

As the church, we have inherited that legacy.  Still, we have to watch ourselves.  We have to be careful about how closely we identify with the qualities of, not Greek or Roman, but American empire.  Believe it or not, we aren’t immune to acting like the rest of the human race.  We too can imitate a beast ready to devour.

It’s the story told in the hymn, “I Sing a Song of the Saints of God.”  Referring to the saints, the second stanza ends like this: “And one was a soldier, and one was a priest, / And one was slain by a fierce wild beast: / And there’s not any reason, no, not the least, / Why I shouldn’t be one too.”

Yes, that’s right folks.  There’s not any reason why I shouldn’t be slain by a fierce wild beast!

Here are some questions for us.  What are our scary monsters?  Are there any great beasts that fill our dreams with terror?

Here’s another way of framing it.  Are we trapped by the past?  Do we carry around undeserved guilt?

Chris Gehrz speaks of All Saints’ Day as a call and opportunity “to be a steward of the past.”[3]  We’re called to be stewards of the creation, not only in space, but also in time.  All Saints’ Day “underscores the importance of preserving [the] past against the erosion that comes with the passage of time.”  We are called to remember—and to remember well.

This may come as a shock, but there are those who like to zap us by unfairly reminding us of our past.  They would have us remember, but not remember well.  Still, I fear that at some level, that tendency resides within all of us.  But to the extent we give way to that tendency, we only speak from our own fear, our own insecurity.  We are not speaking—and being—from a place of love and hope.

In Christ, those voices of accusation are silenced.  In the face of the glory of Christ, they have nothing to say. 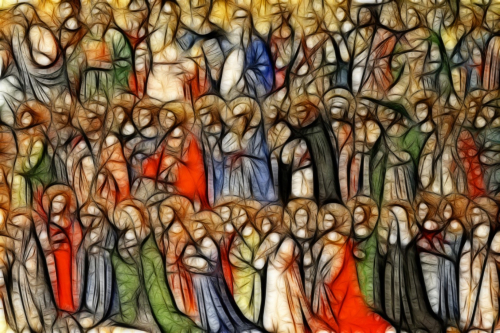 In Christ, the great beasts, the scary monsters, are rendered toothless.  We’re given a whole new view of history.  We are ushered into the communion of saints, the holy ones of the Most High, who we join in receiving the kingdom and possessing the kingdom forever and ever.