blow away the vapor

Last Tuesday Banu and I celebrated our 25th wedding anniversary.  On a similar occasion when we were in Jamestown over a decade ago, I commented in front of some parishioners, referring to her, “I don’t know what I did to deserve you.”  As soon as the words left my mouth, I realized they could be taken in more than one way!  Trust me—it was not a lament; it was not a statement of regret! 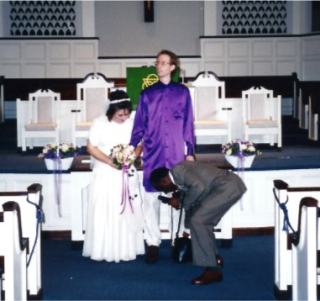 But yes, I don’t know what I did to deserve her.  I’m not always sure what I continue to do to deserve her.  You notice I said, “not always sure.”  There are times when I’m pretty confident (probably arrogant) in that regard!  Having said that, let’s turn our attention to a story in which there is no doubt whatsoever.

The chapter begins, “The word of the Lord came to me [that is, Jeremiah], saying: Go and proclaim in the hearing of Jerusalem, Thus says the Lord: I remember   the devotion of your youth, your love as a bride, how you followed me in the wilderness, in a land not sown” (vv. 1-2).  The Lord is grieved at the straying of a beloved bride—one who followed, even in the wilderness.  This is the bride who on the wedding day, heard the words, “for richer, for poorer,” and held onto that bit about “for poorer”: but only for a little while!

(As a side note, this is probably one of the earliest messages of Jeremiah.  But its being in chapter 2 doesn’t mean a whole lot.  The book isn’t exactly in chronological order.  It’s almost like someone arranged it by taking the pages, tossing them up in the air, and then waiting for them to fall.)

Jeremiah addresses the whole country.  “Hear the word of the Lord, O house of Jacob, and all the families of the house of Israel” (v. 4).  This is the basic complaint: “What wrong did your ancestors find in me that they went far from me, and went after worthless things, and became worthless themselves?” (v. 5).  That is the essence of the matter.  We become what we worship! 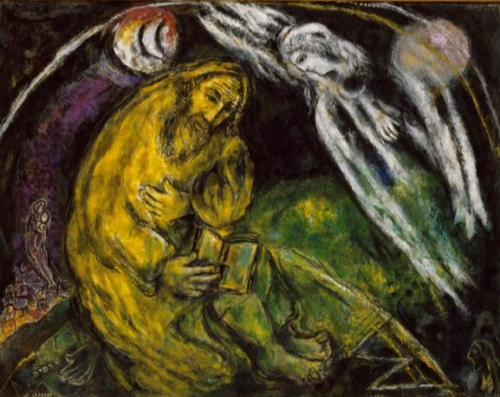 The Lord asks, “Why did you go far from me?”  Why did you reject me?  The word for “reject” (רׇחַקוּ, raẖaq) can mean “become distant,” “remote,” “walk away”—pretend like you have cooties!

Remember, this is also a description of a loved one: becoming distant, becoming remote, becoming absent.

What happened when they became distant, when they walked away?  As we saw, they “went after worthless things, and became worthless themselves.”  That word “worthless” (הֶבֶל, hebel) is an interesting one.  For example, it appears numerous times in the book of Ecclesiastes.  (Here’s how it starts.)  “Vanity of vanities, says the Teacher, vanity of vanities!  All is vanity” (1:2).  The word has many nuances: vanity, futility, nothingness.  The primary meaning is “vapor” or “breath.”  “They went after vapor and became vapor themselves.”

(Last month, while talking about the “elemental spirits,” I noted that St. Paul calls them “only a shadow of what is to come, but the substance belongs to Christ” (Col 2:17).  Don’t be awestruck by them; don’t fear them.  They’re only a shadow.  You know—don’t be scared of your shadow!)

In the same way, don’t go after those empty phantoms.  Don’t be awestruck by them; don’t fear them.  What are you—scared of ghosts?

The people have abandoned their one true love for something which doesn’t satisfy.  They’ve been seduced by someone who will not and cannot satisfy.  If this sounds insane to you, you’re probably right.  But then, there is much insanity within us, within all of us.

Bungishabaku Katho, a professor from the Democratic Republic of Congo, goes into how this could come about.  Referring to Jeremiah’s audience, he says, “Judah had grown accustomed to God: they were so at ease that God was taken for granted and ignored.  Yahweh was no longer the center of Judah’s life, and he was not called upon during the time of danger.  Instead, people chose to go after idols, which are ironically implied to be more helpful than Yahweh.”[1]

In her book From Stone to Living Word, Debbie Blue says, “Life, for most of us, is not full of clear paths and voices from heaven.  Idols help to make up for that deficiency.  Life is outrageous.  Idols help us know how to proceed.  So we form and fashion ideas, beliefs, rules to live by, ways of life, cultural codes.  Idols are understandings we cling to that end up taking the place of God.”[2]

Our idols aren’t so very different from those of Jeremiah’s era.  We have our own loves and devotions, things seemingly much more realistic and useful than God, things that just make more sense.  Of course, there are things to do to make sure stuff gets done!  But how often do we wander from the source of our life and light and love?  How often do we trust in vapor?

The prophet speaks of the people being “brought…into a plentiful land to eat its fruits and its good things.”  However, the land has been “defiled” and made “an abomination” (v. 7).  There are symbolic and spiritual ramifications—how idolatry has led the people astray.  It also has quite visible consequences—the destruction of the environment, the invasion of habitats, the eradication of species of animals and plants.  It includes how we have fared in being the stewards of God’s good creation.

(The devastation of the Amazon rain forest is a case in point of land being defiled and made an abomination.  Thinking of defiling, we have hundreds of thousands of tons of radioactive waste in storage or buried underground: one more unwelcome gift our descendants will inherit from us!)

Jeremiah points in particular to those who should know better.  The priests, those who handle the law (the teachers), the rulers, and the prophets have all failed in their call to be faithful.

Our leaders often fail in their call to faithfulness.  We who are leaders, in whatever context, often fail in our call to faithfulness.  That being said, how much blame do we bear in perhaps allowing ourselves to be led astray?  How often do we follow with blind faith?  How often do we fail to actually investigate what our leaders tell us?  I understand very well there are things beyond our knowledge.  Ask me to describe abatement cost, generic securities, and tax-free spinoff, and I promise you will get a far from coherent answer.

Verse 11 speaks of something that might hamper anyone.  “Has a nation changed its gods, even though they are no gods?  But my people have changed their glory for something that does not profit.”  There’s the insanity again about exchanging the one true love, the one holy love, for a deception, for a counterfeit.

It can happen before we know it.  Am I so sure I have never changed my God for other gods?  We can be baptized into waters that become stagnant.  Our society has much to offer; it makes many promises.  Does a fish swimming in water know that it is wet?

Joan Chittister reflects, “No one lives in a tax-free world.  Life costs.  The values and kitsch and superficiality of it takes its toll on all of us.  No one walks through life unscathed.  It calls to us for our hearts and our minds and our very souls.  It calls to us to take life consciously, to put each trip, each turn of the motor, each trek to work in God’s hands.  Then, whatever happens there, we must remember to start over and start over and start over until, someday, we control life more than it controls us.”[3]

We become what we worship.

How do we see God?  Remember Debbie Blue’s comment: “Idols are understandings we cling to that end up taking the place of God.”  I’ve often said our concepts of God can become idols. 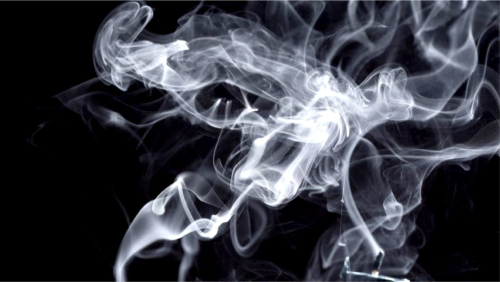 Our passage ends on an especially poignant note.  “Be appalled, O heavens, at this, be shocked, be utterly desolate, says the Lord, for my people have committed two evils: they have forsaken me, the fountain of living water, and dug out cisterns for themselves, cracked cisterns that can hold no water” (vv. 12-13).

The heartbroken Lord reveals two crimes of which the people are guilty.  First, as we’ve seen, they have said no to the covenant, the bond of love.  Living water is fresh, running water.  It is not stagnant.  It doesn’t become the breeding ground of mosquitoes!  Algae doesn’t grow in it!  It doesn’t stink!  That cool, clear water doesn’t appeal to them.

What’s worse, the cisterns are cracked.  They have become broken; the water is seeping out of them.

We might ask, “What’s the big deal about this living water, this running water, anyway?”  Jesus speaks of this in John’s gospel.  He says, “‘Let anyone who is thirsty come to me, and let the one who believes in me drink.  As the scripture has said, “Out of the believer’s heart shall flow rivers of living water.”’  Now he said this about the Spirit” (Jn 7:37-39).

The living water is the Holy Spirit.  The Spirit can’t be held—not in a cistern, and certainly not in a cracked cistern!  It’s like trying the gather the wind with your hands.

Earlier I posed the question to myself about how often I exchange my God for those worthless gods, those idols.  How often do I trust in vapor, and then become vapor myself?  Well, I suppose the prophet would pose this question to me also.  How often do I try to grab, to hold onto the Spirit?  How often do I become content with past revelations, past experiences, of the Spirit—to the point I reject the living water and settle for stagnant water?  My guess is I might not be the only one who needs to hear that question.

Summer is nearing its end; fall is approaching.  I half-jokingly suggested to Banu we should take as a theme another scripture from Jeremiah: “The harvest is past, the summer is ended, and we are not saved” (8:20).  She didn’t agree.  Still, that might not be altogether out of place.  We may feel lost, but the promise of God remains. 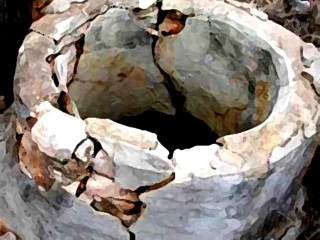 Forget about building those cisterns!  Allow the Spirit to blow away the vapor.  Let’s allow ourselves to regain and reaffirm our first and true love.

[The painting is Jeremiah the Prophet by Marc Chagall.]