Home Wellspring
may our faces shine
denying the best within us

When I was young, for a little while we went to church—a couple of years or so.  My Sunday school teacher had one of those billboards covered with felt material.  (The kind that images can stick to.)  She would use it illustrate the Bible stories for us students.

Of course, one of the favorites was always Noah’s ark.  There would be all manner of critters obediently marching to the giant boat.  Natural enemies would behave themselves, or rather, they would not behave as nature designed them.  The lion would not tear into the lamb.  The eagle would not swoop down and snatch the rabbit.

We can think about how we first learn the story.  “Here come the animals, two by two.”  That sounds nice!  However, reading Genesis 7:2 gives us a slightly different take on it.  The Lord tells Noah, “Take with you seven pairs of all clean animals, the male and its mate; and a pair of the animals that are not clean, the male and its mate.”  It’s about ritual purity.  So maybe it should go this way: “Here come the unclean animals, two by two.”

Anyway, that’s how we first learn the story.  But if we leave it there, we’re reduced to asking rather cartoonish questions.  How did every species find its way to the ark?  Where did they store enough drinking water for the entire time?  Did anyone take a bath?  (You get what I’m talking about.)

Obviously, no story in sacred scripture has such a limited meaning.  The central idea of this story is covenant.

Sometimes there’s confusion between a contract and a covenant.  With a contract, terms are spelled out.  If one party does not abide by the terms, the contract is broken, and sometimes penalties are levied, punishment is meted out!  In addition, we’re always warned about reading the fine print before we sign on the dotted line.  (But who actually spends half an hour with six-point type?)

However, a covenant is quite different.  This is an agreement entered into which oddly enough, is still in effect even if one party doesn’t observe it faithfully.  It’s a statement which says, “I will honor this, even if you don’t.”  It’s “for better or for worse,” though that “for worse” in a marriage covenant can finally reach the point where it’s unsustainable. 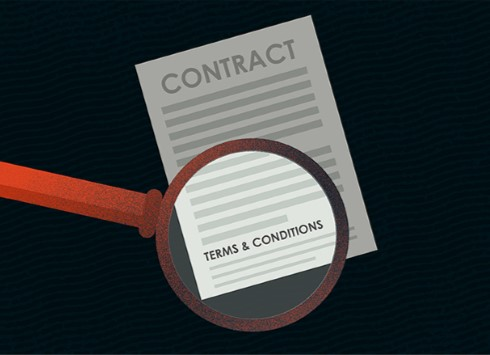 In the Bible, God makes numerous covenants.  We’ll look at the one in our scripture reading in a few moments.  Here are a few notable ones:

In Genesis 15, a covenant is made with Abraham—and Sarah, though she doesn’t get proper credit (v. 18)!  One who has no children is promised a multitude of descendants.

In Exodus 19, God makes a covenant with the children of Israel at Mt. Sinai.  They are promised to be God’s “treasured possession out of all the peoples” (v. 5).

In Psalm 89, we see the covenant made with David, who receives the promise, “I will establish your descendants forever, and build your throne for all generations.”  What if his progeny—what if a king in the Davidic line—becomes unfaithful?  No matter, the Lord will still honor the covenant (vv. 3, 34).

And of course, we have the new covenant in Jesus Christ, which applies to us.  Even when we fail, and fail we do, the covenant stands.

Oh, and then there’s sin!  Sin a’ plenty.  We see the Israelites falling into sin in the wilderness.  They even long to go back to Egypt.  After all, they did have food to eat.  And talk about job security!  Sure there were chains, but who wants to fend for themselves in this terrible freedom of the desert?

Then we have Jesus in the desert.  What happens after he is baptized?  St. Mark tells us, “And the Spirit immediately drove him out into the wilderness.  He was in the wilderness forty days, tempted by Satan; and he was with the wild beasts; and the angels waited on him” (1:12-13).  Jesus is weakened and vulnerable, in body, mind, and spirit.  Come on Jesus, just give him a try.  The devil has some interesting offers, and besides, nobody has to get hurt.  Sin is dangling before him, juicy tidbit it is—but Jesus doesn’t bite.

One way to come at this would be to realize in ancient times, many of the gods just didn’t like people!  They found them irritating, and they constantly demanded obedience, or they would lower the boom.  That was the environment of the ancient scriptural stories.  The difference here is that this God shows mercy and establishes the covenant—the one I mentioned earlier.

Still, the portrayal of a God who unleashes fury isn’t so strange as we might think.  Isn’t the image of a God who hurls lightning bolts still with us?  I think there’s something within the human psyche, regardless of belief system, theology, or life philosophy, that knows we have done, and sadly still do, wrong.  And so, there’s an expectation of punishment, which can lead to all kinds of scenarios.

Of course, we also have that new covenant.  We have the covenant which says in Christ we are forgiven.  Period.

If we can agree the flood wasn’t a historical event—if we can’t point to it on a calendar—I think we can still say it was, and is, a reality.  The flood is still with us, the flood of evil thoughts and evil doings!  However, we haven’t been destroyed.  “Never again shall there be a flood to destroy the earth” (9:11).  That’s the promise.

So here we go: “God said, ‘This is the sign of the covenant that I make between me and you and every living creature that is with you, for all future generations: I have set my bow in the clouds, and it shall be a sign of the covenant between me and the earth’” (vv. 12-13).  The rainbow is the reminder.  “When the bow is in the clouds, I will see it and remember the everlasting covenant between God and every living creature of all flesh that is on the earth” (v. 16).

There is a covenant with every living creature. 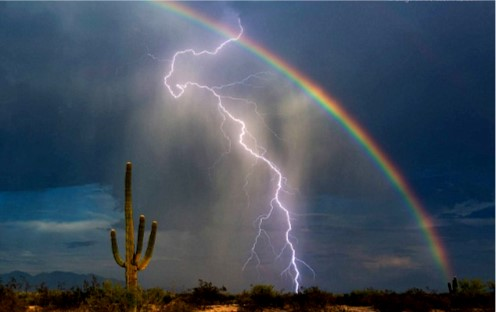 In ancient times, the rainbow was imagined as a bow, a divine weapon used to shoot the arrows of lightning bolts.  But now, the bow is being laid down in the clouds.  God is laying down the weapon.  We’re told God “will find a way of defeating evil without waging war.”[2]

Timothy Simpson wrote an article called, “The Politics of Saving Everybody.”[3]  If you think about it, this rainbow covenant is an extremely radical thing.  Think of it.  This is one of the stories told by those who say they are God’s chosen ones, the treasured possession out of all the peoples.  These are people who believe they’ve been set apart from the other nations.  They have special status.

I find his phrase interesting: the politics of saving everybody.  There are always political divisions.  There are always differences in how people want to accomplish certain things.  Still, maybe we can notice how, over the past couple of decades, divisions have gradually become hardened.  Too often people are questioning, not only the intelligence of those with whom they disagree, but also their character.  Not only are they wrong-headed, but wrong-hearted.  In the past couple of years, that seems to have dramatically escalated.

It can be a tricky proposition to recognize how the rainbow covenant applies to everyone and everything.

But then, that’s why this story is so perfect for Lent.  We are reminded by Joan Chittister, “Lent is the time for trimming the soul and scraping the sludge off a life turned slipshod.”[4]

I find Henri Nouwen’s prayer for Lent especially insightful.  “I know that Lent is going to be a very hard time for me.  The choice for your way has to be made every moment of my life.  I have to choose thoughts that are your thoughts, words that are your words, and actions that are your actions.  There are not times or places without choices.  And I know how deeply I resist choosing you.”[5]

It is difficult to accept God’s throwing down the bow, God’s extending the rainbow covenant to every living creature.  It is difficult to escape lazy either-or thinking, to reframe the discussion, to creatively imagine a third way or a fourth way.

When the flood comes, don’t worry.  God will not let it destroy you!