Home Wellspring
Job, the enlightened one
wait, every living creature?

may our faces shine

When Banu and I lived in Philadelphia, she met through a mutual acquaintance another young woman from Istanbul, named Nilgün.  According to Banu, one time early on in their friendship, Nilgün made a comment about me to her.  She apparently said my face has nur.  That’s a Turkish word which means “light,” but it’s light in the sense of celestial or heavenly light.  I don’t have to tell you that was a gross exaggeration—no, a gross misunderstanding!

We do speak of people’s faces as shining, don’t we?  We think of someone’s face lighting up for a certain reason.  On this day, the Transfiguration of the Lord, we consider the appearance of actual nur, the true shining of heavenly light.  And we’ll consider what that means for us. 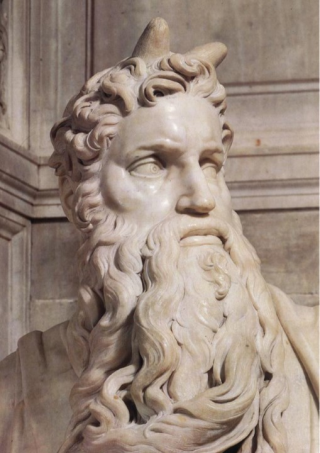 Notice Michelangelo’s sculpture entitled “Moses.”  Is there anything about it that strikes you as odd?  Could it possibly be you never knew Moses had horns?

There’s a word in Hebrew, קׇרַן (qaran), appearing three times in the Old Testament reading in Exodus.  The word for “shining,” it means to “send out rays.”  However, it can also be translated “to display horns.”  It comes from a word that literally means “horn” ( קֶרֶן, qeren).

For centuries in western Europe, the version of the Bible most people read (at least, those who could read) was a Latin translation known as the Vulgate.  In this version, we have a different picture of Moses after he speaks with God.  Instead of “Moses did not know that the skin of his face shone,” it says, “and he did not know that his face was horned” (v. 29).

Instead of Transfiguration, we get something we might expect on Halloween!  So, in his own way, the Italian master is paying his respects to the Moses of today’s scripture.

Horns or not, Moses is the first person in the Bible to be transfigured with the light of God.  This is after his second trip up Mount Sinai.  Remember what happens after his first encounter with God on the mountain—when he receives the Ten Commandments the first time?  There’s the incident with the Golden Calf.  The people get tired of waiting for Moses, and they pressure Aaron into devising some physical symbol of the divine they can see in worship.  Plus, they just want to have a really wild party!  Moses appeals to God to not wipe the people out, and he is summoned back up the mountain.

As we come to today’s reading, Moses is on the way back down the mountain, completely unaware he is literally beaming.  But the looks of terror on the faces of Aaron and the others clue him in that something strange is going on!  How is it that the face of Moses is shining?  The scripture says, “because he had been talking with God” (v. 29). 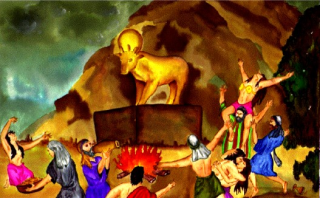 Eliezer Segal, teacher at the University of Calgary in Alberta, speaks of the Jewish legend which goes into a little more detail.  It says after God finished giving the Torah, “Moses wiped the pen on his forehead, and it was this ethereal ink stain that continued to radiate as he walked among the people.”[1]

He’s speaking of the way Moses gets actively involved in this second trip up the mountain.  Remember, he’s already interceded on behalf of the people.  Now, as opposed to the first time, it’s Moses, not the Lord, who provides the stone tablets and then writes on them.

Segal sees a lesson to be learned here, as he wonders, what is it that can make our faces radiate light?  He speaks of the spiritual energy flowing from the face of Moses and looks for a comparison.  He says it’s “not to be compared to fire, but to electrical power, which can exist only in the form of a current that flows continuously to and from its source.”

The connection is also made to us.  “Religious inspiration must also be a continual dialogue and struggle between the Creator and [we] creatures.  When that current is interrupted, or even if it fails to return to its source, then the energy has no use, and we find ourselves donning our figurative veils.”

In our epistle reading, St. Paul makes a similar connection.  He says, “even if our gospel is veiled, it is veiled to those who are perishing” (2 Co 4:3).  It is veiled; the radiance of the gospel doesn’t shine through.  Those traveling the vale of tears who reject the light of life fall stricken by the wayside.

Of course, it’s our gospel reading (Mk 9:2-9) that tells the story of the Transfiguration of the Lord.  That’s why it’s on the calendar.  And for our Lord Jesus Christ, it’s not only his face, but his entire body radiating with the light of God.

On that fateful trip up the mountain, Peter suggests dwellings be built for Jesus, as well as for Moses and Elijah, who also appear with the glory of God.  In effect, Peter wants to hold on to the experience—he wants to trap that light.  He, not surprisingly (because wouldn’t we?), wants to capture the moment.  But the moment is gone.  And as the scripture says, he doesn’t know what he’s talking about.  He needs to be quiet and listen.  The power and energy of God can’t be treated as something static, like something engraved in stone!  Like love, it increases the more we give it away.

Like Peter, we’re often guilty of trying to trap the light.  How often do we avoid letting our own light shine?  How often do we avoid letting light shine onto the paths of others, so they can see for themselves?  And it’s not like there’s some false choice between living the life and saying the words—they go together.  If letting our light shine is our heart’s desire, the opportunities will arrive.  Actually, we won’t have to wait very long—opportunities abound.

It may be asked why Transfiguration is observed on the last Sunday before Lent.  Right before the Transfiguration story, Jesus has just predicted the passion, the suffering headed right for him.  That is, unless he keeps his mouth shut and stops being such a headache for the powers that be!

In the previous chapter, Jesus told the disciples he “must undergo great suffering, and be rejected by the elders, the chief priests, and the scribes, and be killed, and after three days rise again.  He said all this quite openly.  And Peter took him aside and began to rebuke him.  But turning and looking at his disciples, he rebuked Peter and said, ‘Get behind me, Satan!  For you are setting your mind not on divine things but on human things’” (8:31-33).

The light of Transfiguration helps to illuminate the sometimes dark road of Lent.  And if it’s not exactly dark, Lent is still to be a time of reflection, of renewed repentance and reconsideration.

I think we all know that light is not an entirely benevolent force.  After all, it can cause us to go blind!  That’s something I’ve been aware of my whole life.  My eyes have always been sensitive to light.  Especially when I was a boy—and especially if someone were taking my picture in bright sunlight—it would be no time at all before I would start squinting.  During winter, I’m given a reminder of that when sunshine is reflected off a field of snow.  (I think I would make a great vampire!)

Still, much more than simply not being benevolent, light can be positively destructive. 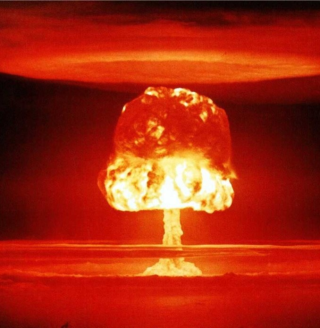 As I said, we celebrate Transfiguration on the final Sunday before Lent.  Traditionally however, it was celebrated on August 6.  Tragically, the 20th century provided August 6 as the anniversary of another kind of light.  It, of course, was the day in 1945 when the atomic bomb was dropped on Hiroshima, one of the most horrific events in human history.  Three days later, it was Nagasaki’s turn!  (On a bitter side note, the first atomic bomb test was actually nicknamed “Trinity”!)

Let’s return to light as a spiritual reality, not just a physical one.  Just as with the light from the sun, the light from God can also be blinding.  Exhibit A: the veil needed to cover the face of Moses!  Faulty, frail creatures that we are, we can only take so much light at a time.  We often resemble cockroaches, who when exposed to the light, scurry off into dark corners!

If we believe what the psalmist says, it’s for our own good that we just go along with it.  Speaking of God, we hear “even the darkness is not dark to you; the night is as bright as the day, for darkness is as light to you” (Ps 139:12).  We can’t hide from God—we only hide from ourselves.

God is good.  God understands our weakness, and graciously provides a veil until we can handle more light.  God sends a cloud, as with the three disciples on the mount of transfiguration.  God lovingly protects us.

So in the end, we need not fear the light.  We can share in the transfiguration of our Lord Jesus Christ.  We can trust the light that shines on the dark places in our lives—the places we are ashamed of.  We can help others, especially those who have plunged into darkness, to let their own light shine.  We don’t have to hold on to the light; we don’t have to hold on to mountaintop experiences.  Jesus says we are the light of the world.

May our faces shine.