take each other off the menu

I’m sure we all have places we remember with a less than fond feeling.  Some people dread the dinner table on special occasions, like Thanksgiving, when lots of family and friends gather around.  There might be the family member who’s always itching for a fight about politics or religion—or the life choices of someone who is present.  Then there might be the one who simply makes inappropriate comments about anything under the sun! 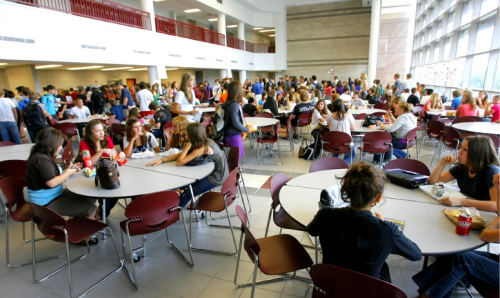 There is a place I remember with a less than fond feeling.  Actually, there are several, but one place in particular sticks out.  It was my junior high school cafeteria.  If there’s somewhere you learn about the social structure of a school, it is the lunchroom!  (That also goes for high school lunchrooms.)

You might find this shocking, but I was never among the popular kids in school.  On a scale from 1 to 10, with 10 being the peak of popularity, I was usually at about 2 or 3.  On rare occasions, I might creep up to 4.  Fortunately, I was never one of the poor souls people made fun of; I was just there, not paid much attention.  It was difficult for me to be at ease in social situations.  I was plagued by shyness.  To put it bluntly, junior high was hell!

There was a curious thing I sometimes felt.  I sometimes felt like I wasn’t real.  Again, it’s not like I was picked on; it’s that I often felt like I was in my own little world.  People who are real don’t have so much trouble making friends, do they?  Privately, I knew I was real.  I was sure of it.  Within myself, I sensed there was nothing really wrong with me, although the outward evidence seemed to suggest the opposite.

But I imagine that’s enough of my sob story and irritating introspection!  I’m sure no one else has felt the way I did—and sometimes do.

Still, I’m fascinated by that sense of not being real, of existence being called into question.

Earlier this month, Umair Haque wrote an article called, “The Rage in America’s Soul: The Dilemma of Nonexistence.”[1]  It’s a fascinating, insightful, and disturbing take on today’s society.

He sees the problem of “nonexistence” as flowing from, and a part of, the “rage” we have.  Haque has lived all over the world, and he’s noticed something he claims is unique to the US.  I have not lived all over the world, so maybe I’m not the best person to comment.  I don’t believe we’re the only country filled with rage, though perhaps we’ve learned to perfect it in our own way!

He says he “would like to gently confess: I have never seen a place with so much rage in its soul — not even an iota as much — as America.  If we are wise, we will ask, instead of becoming defensive, simply, why?”  As a people, as a nation, why are we filled with so much hate?

(And don’t worry, I’ll include the church, hearing reflections by St. Paul in a few moments!)

It seems when almost anything is reported on the news, the finger pointing soon commences.  Before the dust has settled, people are wondering, “Who’s to blame?”  And even more troubling, we too often see opposite groups as believing the others are not only mistaken—they don’t have the facts straight—but they’re morally wrong.  It’s not simply a matter of intelligence, but of character.  We can automatically assume that someone isn’t acting in good faith.  And sad to say, I have at times found myself falling prey to that temptation.  It is not a good thing!

In calling our rage as Americans a rage of “the soul,” Haque points to a number of things.  He says the rage is omnipresent.  “It does not come and go like the tides, but is more like a background hum of constant fury.”  One example that comes to mind is reading the comments to stories or posts on the internet.  The illogical and irrational venom people write makes me think all of us have taken crazy pills!

He also says it’s merciless.  “It is not merely the shout of a sulking child, but points to a kind of profound agony, one so deep, that there can be no possibility of forgiveness.”  We hold on to grudges with a vengeance.  There is a spiritual reality at work here.  If we haven’t experienced forgiveness, that is, forgiveness for something that really needs to be forgiven—then it’s almost impossible to extend forgiveness.  We have to feel the love.

That goes along with something in 1 Peter: “maintain constant love for one another, for love covers a multitude of sins” (4:8)!

The third thing Haque mentions is “the rage is murderous.  It doesn’t contain the anger of a scorned lover, but the exhilarating, dizzying fury of a killing field.  There is kind of pleasure, a satisfaction that seems to linger in it.”  There really is a dark delight, a twisted joy, in slaying the enemy, whether with weapon or word.  That’s especially true if we feel ordained by God in our enterprise.

When we view others through a lens of contempt and hatred, we don’t see them as simply human beings.  We don’t see the joys and hopes and fears that we have.  We don’t see them as real.  Haque continues, “The only thing that I know that can produce such rage is to not to be seen to exist at all, which is the first kind of murder that there is, really.”  In effect, we kill them.  We deny each other’s existence as the beloved of God, as those for whom Jesus Christ died. 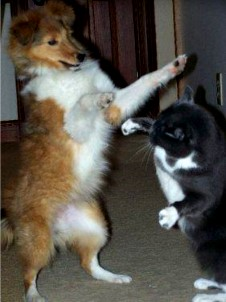 So there’s a good segue; I follow up on my promise to bring this to the church!

The apostle Paul’s letter to the church in Galatia is possibly the earliest one he wrote.  To put it lightly, he is befuddled at some of the stuff they’re doing and the peculiar things they believe.  He is “astonished;” he calls them “foolish”; he is “perplexed” (1:6, 3:1, 4:20).  And it would seem from the scripture reading in chapter 5, we don’t have to wonder why.

He begins the chapter by reminding the Galatians of their freedom in Christ.  He warns them against using their freedom to go back to slavery, as crazy as that sounds.

Now we see how the apostle tells them “you were called to freedom, brothers and sisters; only do not use your freedom as an opportunity for self-indulgence [literally, “the flesh”], but through love become slaves to one another.  For the whole law is summed up in a single commandment, ‘You shall love your neighbor as yourself’” (vv. 13-14).

A moment ago, I mentioned viewing others through a lens of contempt and hatred.  If we do that, it hampers our ability to see them as real.  It also twists our ability to know the truth.

In our Book of Order (F-3.0104), there’s a saying, “Truth is in order to goodness.”  Part of what that means is truth isn’t always a neutral concept: 2+2=4.  Truth is to be in service of the good.  There is a way of presenting the truth that tears down, that destroys.  There is an evil way of telling the truth—the devil’s truth.  It brings death, not life.  If we tell a truth in rage, if we have a malevolent purpose, if we want to do harm, it’s not really true!  It’s not God’s truth.

Unfortunately, it looks like the Galatian church is in danger of becoming infected with hate.  Paul wants to get ahead of that.  He warns them about using their freedom to indulge the flesh.  And here, the “flesh” is not simply our physical bodies.  It is the tendency to use the gifts of God for purely selfish intent, to not care what happens to others or to the rest of creation.  The “flesh” is self-indulgence.

The apostle gives them some advice, some Spirit-inspired advice.  “If, however, you bite and devour one another, take care that you are not consumed by one another” (v. 15).  Take each other off the menu!

In recent years, zombies have become very popular.  That is, stories and movies and tv shows about them—not the zombies themselves!  Zombies go around eating people, but they don’t know why they do it.  After all, they are dead.  Some people see the fascination with zombies as a commentary on our society.  We mindlessly consume each other, and it’s reflected in art (if portrayals of zombies can be considered art). 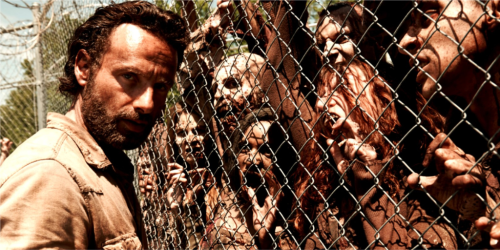 Richard Rohr says something interesting in a reflection on Thérèse of Lisieux, who died in her twenties at the end of the nineteenth century.[2]  She came to have the nickname “The Little Flower.”  She spoke of the “science of love.”

Rohr makes a reference to John the Baptist saying of Jesus, “Here is the Lamb of God who takes away the sin of the world!” (Jn 1:29).  He says, “the sin of the world” is “ignorant killing, and as we see today, we are destroying the world through our ignorance.”

“Father, forgive them, for they know not what they do.”

Paul wants the Galatians to wake up from the drowsiness and the haziness of self-indulgence.  They need to see what they’re doing.  They’re eating each other alive.

I started by talking about places we remember with a less than fond feeling.  I put forth the supposition that one of them might be Thanksgiving dinner.  And I speculated one reason might be arguments over religion and politics.  Mind you, I enjoy talking about that stuff, but it’s important to do so without speaking the devil’s truth.

At its very best, the church embraces those with various viewpoints.  One thing I like to mention is Jesus’ inner circle.  It included Matthew the tax collector and Simon the Zealot: a collaborator with the Romans and a revolutionary who wanted to overthrow the Romans.  (I wonder how their dinners went.)

We can have those different groups—conservative and liberal—rich and poor—popular kids and kids like me, in Christ, and do it with gratitude.  Live with thanksgiving. 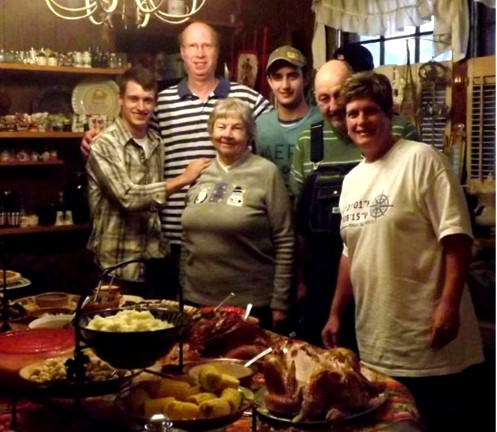