Home Wellspring
take each other off the menu
revelation of gratitude

fasting just in time for Advent

In recent years, we have been reminded there are more obese people on planet Earth than those who are malnourished.  There are a number of reasons: love of fast food and of huge portions in general, lack of exercise, and oh, let’s go again with huge portions—at Thanksgiving dinner! 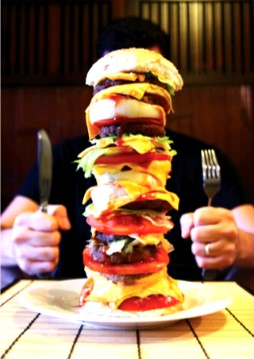 I’ve never thought of myself as particularly gluttonous, though I can’t claim I never over-indulge.  Still, if I had to name a single spiritual discipline I’ve been most reluctant to follow, it would probably be fasting.  At first glance, considering the note I mentioned at the beginning, it seems that I’m far from alone.  Still, as we continue, we’ll see how fasting is about more than abstaining from food.

Banu mentioned last week about the tradition of Advent, of how it’s about self-denial, waiting in expectation for the coming of the Lord.  With the madcap rush of the economically-driven invented holiday called Black Friday, we are encouraged—no, ordered—to jettison our sense of self-control.  It regrettably (or perhaps, fortunately) demonstrates our need for spiritual discipline.  It shows our need for spiritual disciplines, plural.

And they are indeed practices, things we weave into our everyday lives.  Examples would be fasting (as mentioned), reading the Bible, prayer, worship, service, being accountable to someone loving and wise.  And there are plenty others.

I will confess I often have a problem with meditation.  I too often focus on the “monkey mind,” just jumping around.  I’m thinking about everything in the world.  “Wait, I need to write that down…  I need to fidget with that object on the table…  Hey, who’s that walking outside?”

One thing the disciplines are not is showtime!  They are not about self-promotion.  This isn’t something you post on Facebook.  If you encounter someone who says, “What has two thumbs and is becoming more Christlike every day?  This guy!” then clearly that poor soul is sadly mistaken. 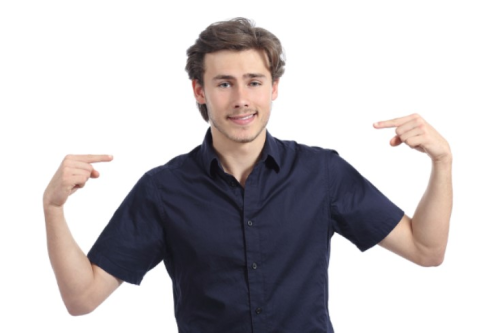 There’s a little bit about spiritual disciplines in general.  Now let’s get back to our feature story!

I think many of us have almost a fear of fasting.

I imagine we’ve all had our blood drawn to check medicine levels or whatever.  Sometimes that means fasting for 12 hours or maybe just skipping breakfast.  I remember one time going to the clinic to provide a sample, which required fasting after midnight.  The next morning, some of the people there were saying how they wanted to arrive at 8:30, as soon as the place opened, so they could hurry up and get something to eat.  Apparently, they were starving to death!

I don’t want to spend too long on the mechanics of fasting.  Suffice it to say that it doesn’t always mean consuming nothing whatsoever.  There are many different ways to fast.

In her Spiritual Disciplines Handbook, Adele Ahlberg Calhoun says the purpose of fasting is “to let go of an appetite in order to seek God on matters of deep concern for others, myself, and the world.”[1]  Clearly, “an appetite” can refer to many different things.  As St. Paul says in Romans 13, we’re to “put on the Lord Jesus Christ [like a garment], and make no provision for the flesh, to gratify its desires” (v. 14).

Here, the “flesh” is not simply our physical bodies.  It speaks of the tendency to use the gifts of God for purely selfish intent, to not care what happens to others or to the rest of creation.  The “flesh” is self-indulgence taken to extremes.

When we take self-indulgence and the temptation to self-promotion we just looked at, we find our scripture reading in Isaiah 58 deals with something like this.  This last part of the book of Isaiah is often dated a few years after the return from exile in Babylon.  The initial joy of the exiles has faded as they deal with opposition.  They’re confronted by those who were never sent into exile—and by those who have settled in the land since then. Right off the bat, we know something’s up.  The prophet is told, “Shout out, do not hold back!…  Announce to my people their rebellion” (v. 1).  Apparently, they’re not living in a way that befits God’s people, even though “day after day they seek me and delight to know my ways, as if they were a nation that practiced righteousness” (v. 2).

The people in our scripture reading say some things to God that might sound familiar.  “Why do we fast, but you do not see?  Why humble ourselves, but you do not notice?” (v. 3).  Where are you, God?  Why aren’t you paying attention?  Why don’t you help us?

The people are behaving as though fasting and other pious actions can compensate for injustice.  They think some acts of worship can cover up their crimes.

What have they been doing that’s so bad?  According to the scripture, “you serve your own interest on your fast day, and oppress all your workers.  Look, you fast only to quarrel and to fight and to strike with a wicked fist.  Such fasting as you do today will not make your voice heard on high” (vv. 3-4).  Eugene Peterson says, “The kind of fasting you do won’t get your prayers off the ground.”  The people are just going through the motions.  They’re not letting themselves be changed.

And here’s something else spiritual disciplines are not.  They are not magic.  There are no incantations to utter that will compel God into doing anything.  God is a God of love.  God is an ethical God, which means God cares about ethics.  It matters what we do; it matters how we live our lives.

This is the fast God chooses: “to loose the bonds of injustice…to let the oppressed go free, and to break every yoke” (v. 6).  Verse 9 has something I find especially interesting.  What’s disapproved of here is “the pointing of the finger, the speaking of evil.”

The pointing of the finger.  We see this all the time.  We like to blame others; we try to avoid taking responsibility.  It becomes really obvious during political campaigns.  Advertisements flood the airwaves: ads which insult our intelligence and present the opposing candidate in the worst possible light.

I mean that literally.  You might hear a voiceover saying something like this: “Millions lack health care, but fat cat Joe Blow just doesn’t care!”  Meanwhile, the opponent is presented in a black and white still photograph, or worse, moving in slow motion.  That’s a neat trick.  You can make anyone look bad by showing them in slow motion, especially if they’re about to sneeze.  (I don’t know if anyone’s actually done that, but it would make the person look stupid.)

And then when we switch to the candidate the ad is promoting, muted colors burst with the power of the rainbow, people are smiling, children are laughing, joyful music is heard—the kingdom has come!

Unfortunately, “the pointing of the finger” isn’t restricted to the political realm.  It is alive and well in the church.

“Fasting is an opportunity to lay down an appetite,” Calhoun says, “an appetite for food, for media, for shopping…  Fasting exposes how we try to keep empty hunger at bay and gain a sense of well-being by devouring creature comforts.”  Speaking of creature comforts, when the power goes out, I want it restored as soon as possible!

“Through self-denial we begin to recognize what controls us.  Our small denials of the self show us just how little taste we actually have for sacrifice or time with God.”[2]

I said earlier that I think many of us have a fear of fasting.  When we include these other appetites, it’s probably safe to say that we have a terror of fasting.  Americans in particular are afflicted with this terror.  Our entire civilization seems designed to keep us distracted.

Calhoun continues, “Skip the radio or TV for a day and become aware of how fidgety you are when you aren’t being amused or diverted.”[3]  I would say it’s become more of a challenge to avoid the internet or to stop fiddling with cell phones.

She asks a couple of questions.  “When you feel empty or restless, what do you do to try to fill the emptiness?  What does this tell you about your heart?”[4]

That’s some powerful stuff.  We all feel empty and restless, some more so than others.  What do we do about it?

When we fast from our appetites (and everyone has their own), we say to them, “I don’t need you!  I don’t have to be your slave!”  We begin to set ourselves free from our own chains, and we’re better able to show others how to be free from their chains.

Today is Christ the King Sunday, though this sermon really hasn’t been about that.  (Unless we consider Christ to be the ruler of our appetites!)

Do we really need to hear about fasting, just in time for Advent?  As I said earlier, the season of Advent has been a time of penitent reflection, of waiting for the Lord.  But you know the old saying, “No good things come to those who wait.”  (Hold on, do I have that right?) 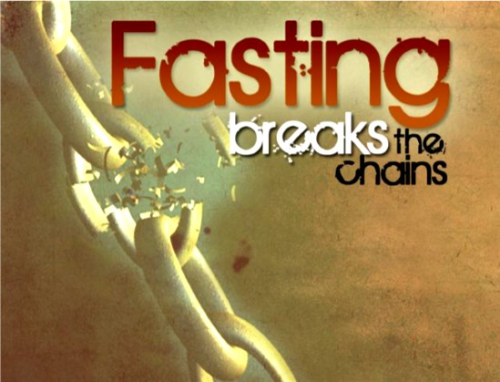 What does the prophet say?  “If you offer your food to the hungry and satisfy the needs of the afflicted, then your light shall rise in the darkness and your gloom be like the noonday” (v. 10).  Let’s have a proper fast, and let’s let the light shine.