Home Wellspring
reflect on Sabbath
eulogize, mourn, and move on

an offer you can’t refuse

Weddings can be strange things. 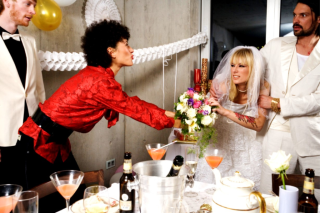 Our Book of Order has something to say about this.  “The marriage service shall be conducted in a manner appropriate to this covenant and to the forms of Reformed worship, under the direction of the minister of the Word and Sacrament and the supervision of the session” (W-4.0603).  And notice that it uses the word “marriage.”  Too often, there’s more focus on the wedding than on the marriage.

But I mention how weddings can be strange things.  Banu’s and my wedding might fit into that category.

We decided to make our vows in Turkish.  Our Old Testament professor, who we asked to preside, wrote them down so he could pronounce them properly.  Things were going fine until I said a particular line.  As soon as it came out of my mouth, I noticed Banu’s sister, who was sitting in the front row, begin to quietly laugh.  Afterwards, I was informed that my intended statement, “I promise to love you forever,” actually had the meaning, “I promise to explode.”  At least, that’s the way she explained to me.

(Hearing the story later, a friend of ours told me since I messed up the vow, I didn’t have to keep it.  Banu was not amused.)

When I’ve done weddings, I sometimes tell the couple it’s not a real wedding if something doesn’t go wrong!

In Matthew 22, Jesus speaks of a wedding that is extremely strange.  Actually, this is the wedding feast, so it’s not just the wedding; it’s the party that goes with it!  And calling it “strange” is a vast understatement.  In fact, the entire parable is worse than strange.  You can’t help but notice the violence and craziness.  One writer has called it “this bizarre little story.”[1]

You’ll notice this isn’t a case of wedding crashers.  It’s the exact opposite.  The invitations have been sent out, but nobody wants to come! 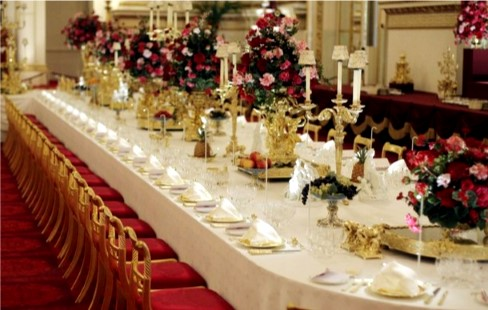 I like how the story gets started.  “The kingdom of heaven may be compared to a king who gave a wedding banquet for his son” (v. 2).  This is a parable.  The Greek word (παραβολη, parabolē) means “comparison.”  The kingdom of heaven may be compared.  Some say it’s also an allegory, a figurative story.  It has things which represent something else, so it’s not a direct comparison.  Maybe that lessens the embarrassment of what follows!

The wedding day arrives, and the king sends the word.  We’re ready to start!  Still, as you heard, no one shows up.  So he sends some more servants, and they describe the delicious food on the menu.  Everything is ready—we even kept in mind the vegans and the gluten-free folks!

Even this doesn’t work.  They go back to their business, and some of the invitees grab the servants and give them a sound beating; some of them are even killed.

Lance Pape, professor at Brite Divinity School, says “things go completely off the rails…  [T]he weirdness and violence are just getting started.”[2]  The king goes ballistic.  He doesn’t send any more of his servants.  This time, he sends his soldiers!  And they lay waste to the town.

While the fires are burning, the king says, “Forget those ungrateful fools.  Just grab people at random and bring them to the banquet.  And you know, let’s do that before the food gets cold!”

Okay, what do we have so far?  All of this is being compared to the kingdom of heaven.  If the king is supposed to be God, what does that say?  Is it like The Godfather, where Marlon Brando as Don Corleone uses the phrase, “I’m gonna make him an offer he can’t refuse.”  Is God a kingpin in the mafia? If it seems things can’t get any crazier, hold on to your hats, because they do!  The king sees a guest without wedding garments, and he gets completely unhinged.  Now in fairness, it’s been pointed out in Middle Eastern cultures it was common for guests to be provided with proper attire.  Maybe that’s true, and it would suggest the unfortunate fellow was guilty of refusing the king’s gift.  Still, we might be forgiven for thinking there’s a tiny bit of overreaction on the king’s part.

Bind him hand and foot!  Toss him out into the dark!  Let him wail and grind his teeth while experiencing the pain and the loneliness!  As I said—just a tiny bit of overreaction.

Having said that, this is the way the story is often presented.

Lutheran pastor Janet Hunt suggests another way to approach it.[3]  A big part of it is asking if the God of Jesus Christ in any way resembles the king in our parable.  I ask that question as well.

She wonders if those who refuse the invitation do it “as a sign of protest.”  Is it beyond the realm of possibility that the king is a tyrant?  His actions might seem to suggest so.  Could it be the people don’t believe he is worthy of the title “king”?  Maybe his motivation to have a big crowd at the banquet is to prevent suffering shame in front of everyone, to boost his ego.

She says, “I cannot help but believe that Jesus was, in fact, more like those who would never have been among the first invited…but would have found himself in the second batch of invitees.”  Jesus isn’t a part of the fancy crowd who received the first batch of invitations.  He’s part of the rabble, the ordinary folk.  That would seem to go along with the upside-down, inside-out way Jesus tells stories and engages with people.

She continues, “Indeed, as this parable comes to its conclusion, I cannot help but wonder if Jesus is not the one without the wedding robe—the one who could not, would not pretend to honor a tyrant king by putting on that wedding robe—who in behalf of all of us was thrown into the outer darkness where there was weeping and gnashing of teeth.” 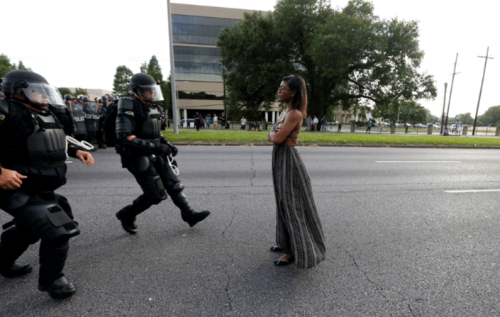 Hunt admits she might be way off base.  She might be dead wrong.  But she does offer a thought.  “[I]sn’t it just as likely that the kingdom of heaven is more like any one of us who refuses to bow to the powers that be when innocents suffer than like a king who throws his power around and destroys those who would not do his will?”  Maybe that’s the comparison between the kingdom of heaven and the parable.  I’ll leave you to mull over it!

I would like to go back to the thought of refusing gifts.

I was baptized when I was 21.  It wasn’t until I was in college that I really opened myself up to matters of faith.  I made discoveries, but I too often wanted to control how they were made.  I even started going to church, though on an infrequent basis.  I knew I was being called to go deeper, to let go.  It was the prompting of the Holy Spirit.  But I didn’t want to be chosen; I didn’t want to go to that party.  I didn’t want to taste the food at that banquet.

Eventually I surrendered and submitted to the waters of baptism.  I RSVPed the Spirit and said, “Count me in!”  But that’s not the end of the story.  As the years have gone by, there are still parties I don’t want to attend.  There have been times when I have refused the king’s invitation.

Our friend Lance Pape chimes in.  “The doors of the kingdom community are thrown wide open, and the invitation extends literally to all.  But once you come in, there are standards.  You can’t go on acting like you are not at an extraordinary party.”  This party, this wedding feast, is serious business. 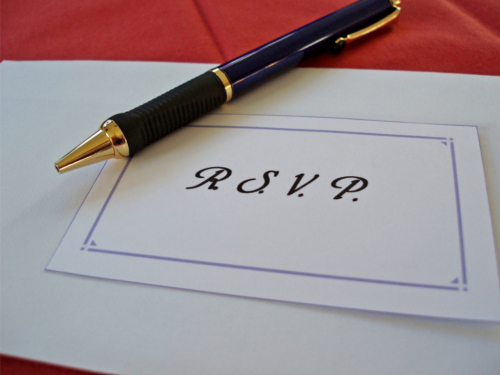 He says about the fellow without the wedding garment that “his problem is a failure to party.  The kingdom of heaven…is a banquet, after all, and you’ve got to put on your party dress and get with the program.  The kingdom music is playing, and it’s time to get up on the dance floor.”

In all honesty, I need to practice getting on the dance floor, but maybe learning to laugh at yourself and being a fool for Christ is the perfect first step in that dance.  There is plenty of sorrow and pain in the world, but accepting the invitation to the wedding banquet opens us to the joy of the Lord.

I would say that’s an offer you can’t refuse.