Home Wellspring
spirit to forgive
what kind of father is that?

the art of blessing

Trinity Sunday is the only major holiday on the church calendar that isn’t based on the life of Jesus.  Instead, it’s based on a theological doctrine.  That might sound dry and academic, but the Holy Trinity is infused with life and joy and beauty and even humor.

Trinity Sunday doesn’t commemorate a single moment, but rather an eternal moment.  It’s not something in the life of Jesus the human, but rather the eternal life of Christ, the Second Person of the Trinity, one with God and the Holy Spirit.

With the Holy Trinity, we have the very definition of community.  We have the perfect example of κοινωνια (koinōnia)—of communion, of fellowship.  In this community, everyone abides by the law of love.  No one prefers self before others.  This is the model for human family, for human society.  There is no grasping for power.  The desire is to be a blessing.  The Trinity lives out the art of blessing.

Speaking of blessing, the last verse of 2 Corinthians should be familiar.  It is to me, since that’s the benediction I like to use at the end of services of worship.  This is the Trinitarian benediction, with all its simplicity and depth. 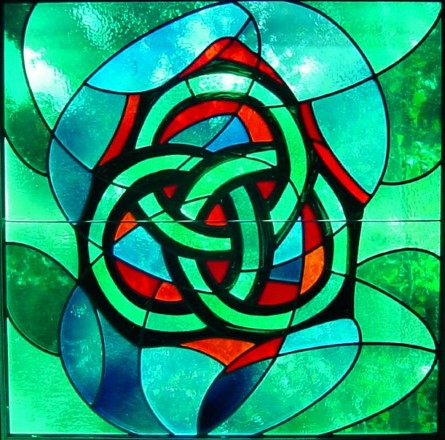 It’s included at the end of St. Paul’s farewell to the Corinthian church, one that has given him plenty of grief.  He’s had to get after them for being too lax, and then for being too strict.  They’ve split themselves up into competing factions; they’ve treated the poor with disrespect; they’ve chased after the latest fads; they’ve done these and many other things.  To their credit, one thing they haven’t been is boring!  But through it all, Paul has consistently guided them in, and to, the love and peace of Jesus Christ.

In fact, he tells them how “the God of love and peace will be with” them.  That’s ultimately what verse 11 is all about.  First of all, when he says, “Put things in order,” he’s not demonstrating OCD!  He’s not being a neat freak; he’s not being a tidiness Nazi.  The apostle wants to avoid the disorder that has so often plagued them.  The word used, καταρτιζω (katartizō), can also mean “be restored.”  So he’s not browbeating them.

Secondly, his plea to “listen to my appeal” is a plea to learn humility.  That flows into his request when he says, “agree with one another.”  Paul’s not telling them to act like clones.  He wants them as best they can, to obey the law of love.  This will enable them to “live in peace.”

In verse 12, the apostle adds this: “Greet one another with a holy kiss.”  He says this in several letters.  This is where our “kiss of peace” comes from.  And for anyone who’s ever wondered why we usually do not kiss each other—besides concerns about inappropriate contact—there’s also the fact that fairly early in church history, they also had concerns.  The liturgical practice of men kissing women who were not their wives, and women kissing men who were not their husbands, was abandoned.

I have a little story along those lines.  When Banu and I were in seminary, I took a worship class taught by a Presbyterian professor.  She gave us an assignment.  On Sunday, we were to attend a church with a worship service very different from the one we were used to.  There was an Armenian Orthodox church about a mile down the road.  (There are a few differences between the Armenian Orthodox and Presbyterians!)

The entire service was in the Armenian language, except for the sermon and the prayer of confession, which were in English.  Included in their liturgy was the kiss of peace.  The only other people in the pew where I was sitting was a family with a father, mother, and daughter.  She looked like she was about 20.  They started down the line, kissing each other on the cheek.  Then the daughter started moving toward me; I became a bit nervous.  She extended her hand, so a holy kiss turned into a holy handshake.  Potential drama averted! 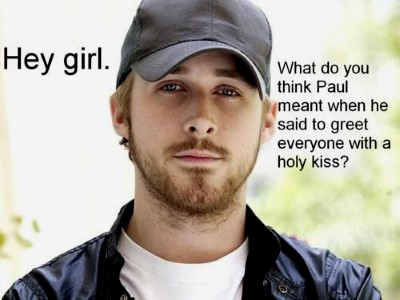 Ryan Gosling does some theologizing.

In any event, maybe you can see why this epistle reading is used for Trinity Sunday.  With the Trinitarian benediction, we get a triple blessing.  Something similar is going on with our gospel text in Matthew, the so-called “great commission.”  The baptismal formula of “in the name of the Father and of the Son and of the Holy Spirit” fits nicely for today.

What does the Holy Trinity mean in our lives?  There are many ways to go with this.  An image that might be helpful is one I suggested earlier—the Holy Trinity as the example of the perfect community of love.  That has ramifications for all of life, including the call to make disciples.  Then it won’t be just a song: they really will “know we are Christians by our love.”

I must confess, though; I don’t know what I’m talking about!  I say the words, “perfect community of love,” but I have only the scarcest idea what that means.

Well, it’s been said a picture is worth a thousand words.  And it is a picture, more specifically an icon, that I want us to consider.  It’s “The Trinity,” by Andrei Rublev.  This icon is a prime example of the art of blessing.  Rublev was inspired by the visitation of the three men/angels to Abraham when they announce that Sarah will have a child (Genesis 18:1-15).

The word “icon” (εικων, eikōn) appears many times in the New Testament.  It’s usually translated as “image.”  The apostle uses it in Colossians, when he says Christ “is the image [the icon] of the invisible God” (1:15).  We Presbyterians, as well as Protestants in general, tend to be suspicious of icons.  They seem to be too “Eastern Orthodox,” like the Armenians I spoke of a few moments ago.  You know, there’s nothing wrong with being in an Orthodox Church!  (We all have our plusses and minuses.)

Icons are considered to be windows into heaven, windows into the eternal.  This one features, from left to right, Father, Son, and Holy Spirit.  They show mutual deference to one another.

Over the centuries, many gallons of ink have been spilled over descriptions of the icon and what the various parts of it mean.  As you might guess, there is far too much for us to deal with right now.

Briefly, we can see the Father wearing a shimmering robe, reflecting many colors.  One writer says it “seems transparent,” it “cannot be described or confined in words.  And this is how it should be.  No one has seen the Father, but the vision of him fills the universe.”[1]

The Son is the Incarnate one, and his garments unite the brown of earth and the blue of heaven.  “In his person he unites heaven and earth, the two natures are present in him.”

The Holy Spirit is clothed in “the clear blue of the sky…with a robe of a fragile green.  So the Spirit of creation moves in sky and water, breathes in heaven and earth.  All living things owe their freshness to [the Spirit’s] touch.” 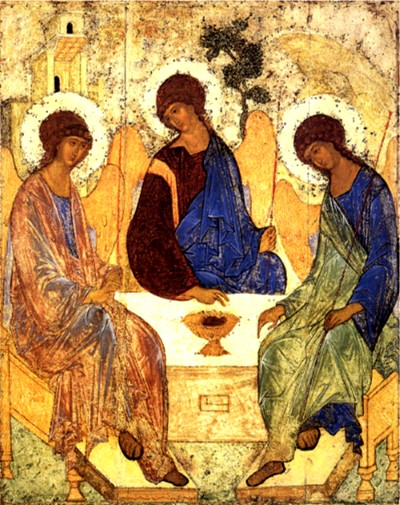 Maybe you get what I’m talking about.  All kinds of meaning can be seen in it.

In his excellent book, Praying with Icons, Jim Forest says this of Rublev’s work: “If one were to search for a single word to describe the icon, it is the word ‘love.’  The Holy Trinity itself is a community of love so perfect that Father, Son, and Holy Spirit are one.  All creation is a manifestation of God’s love.  The Incarnation of Christ is an act of love as is every word and action that follows, even if at times it is what Dostoevsky calls ‘a harsh and dreadful love.’”[2]

At first glance, I wondered what the big deal was.  Why all the fuss about this image?  But it was just that: a first glance.  I hadn’t taken the time to be with the icon, to pray with it, to let it speak to me.

Forest finishes his discussion of the icon in what I thought is a surprising way.  He says, “‘Of all the philosophical proofs of the existence of God,’ wrote the priest and scientist Pavel Florensky, who died a martyr’s death in the Stalin era, ‘that which carries the most conviction is not mentioned in any textbook.  It may be summarized as follows: “Rublev’s Holy Trinity icon exists, therefore God exists.”’”[3]

Imagine that: a work of art, the product of human hands, being given such lofty praise.

In a few moments, we’ll sing the hymn, “O Lord, Our God, How Excellent,” which is based on today’s psalm reading, Psalm 8.  The second stanza goes, “The heavens shout Your handiwork; / We stand beneath in awe, / To think the One who made all things / Should care for us at all.”

We are surrounded by blessing, even if you’re like me and really don’t understand!  Trinity Sunday reminds us that we are not alone, in fact, we are enveloped by love.  In one of my favorite verses in the Bible, Jesus says in our gospel reading to “remember, I am with you always, to the end of the age” (Mt 28:20).  The blessing given to us—the benediction pronounced over us—both reassures us and calls us to action.

In our stumbling, halting way, we try to envision the Holy Trinity.  We use geometry, such as a triangle.  But that’s not the only way to picture the Trinity, with the inner being separated as points.  The Trinity can also be envisioned as a circle, ever flowing, never ending, encompassing all that is, existence itself.

In the name of the Father, Son, and Holy Spirit—the Creator, Redeemer, and Sustainer.  Amen.