A few years ago, Banu and I lived about a half hour’s drive from some Mennonite markets.  One time, I noticed a sign saying they would be closed for Ascension Day.  It’s always the Thursday forty days into the Easter season, so it was this past Thursday.

I told Banu I found it interesting that the Mennonites actually take the day off to celebrate the Ascension of the Lord.  For many of us, I imagine the day came and went this week without our even being aware of it.  That shouldn’t be entirely unexpected; Ascension is one of those days it’s hard to wrap our heads around.  Ascension—what the heck is that about, anyway? 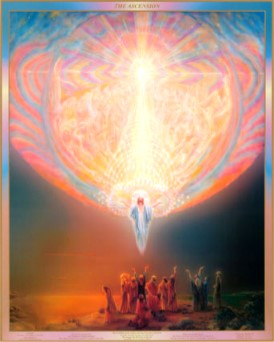 In his gospel, here’s how St. Luke puts it: “Then [Jesus] led [the disciples] out as far as Bethany, and, lifting up his hands, he blessed them.  While he was blessing them, he withdrew from them and was carried up into heaven.  And they worshiped him, and returned to Jerusalem with great joy; and they were continually in the temple blessing God” (24:50-53).

In ancient times, people tended to think of the universe as though it had three stories.  Some people still do.  We might imagine a three-story house.  The heavens were the top story, maybe the attic; our world was the first floor, and as for the underworld, as the name suggests, it’s down there below the surface.  It would be the basement.

Well, we’ve been in outer space, where there is no “up” or “down.”  And as for the nether regions, I once heard a traveling evangelist tell an interesting story about that.  He claimed workers in France doing deep well drilling made a bizarre discovery.  He said they could hear the screams of the doomed rising up to them!  Apparently, the location of hell is under France.

(I’m not so sure.  I think the evangelist’s comments were based on a subconscious aversion to the French!)

Anyway, today we wouldn’t describe the Ascension of the Lord as someone floating up into the sky.  We no longer perceive the cosmos in the “three story” way, as did the ancients.  We don’t see ourselves the same way.  You do realize we are mostly empty space?  At the atomic level, there are electrons spinning around the nucleus, like tiny solar systems.  Smaller and smaller particles are being discovered.  A few years ago, evidence of the speculative Higgs Boson particle was detected. 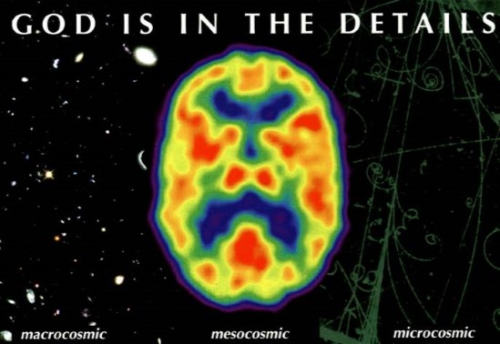 Going in the other direction, by using ever more powerful telescopes, we’re gazing deeper, toward the edge of the universe itself.  We’re looking at light that has taken billions of years to arrive at Earth.  (It appears we have a new “three story” image:  macrocosmic, mesocosmic, and microcosmic!)

Luke is speaking of the resurrection body of Christ.  Imagining the physics of that is enough to get your head spinning!  We might think of him as becoming interwoven with our space and time.  Earlier in chapter 24, that could be how he appears and disappears to the disciples at will.

However we conceive of it (and I won’t belabor the point), why is the Ascension of the Lord so important?  Why must Jesus depart?  I promise you—this isn’t just abstract theory.  This has very “real world” meaning for us.

There’s an Australian missiologist named Michael Frost.  At a conference in Budapest, Hungary, he said he’d spoken with some Christian surfers a few years earlier.[1]  When he asked who their favorite surfer was, he described it as “pandemonium.”  They were yelling different names, but he got them to narrow it down to Kelly Slater, who was described as the greatest surfer ever.  He was able to get them to describe him in detail. 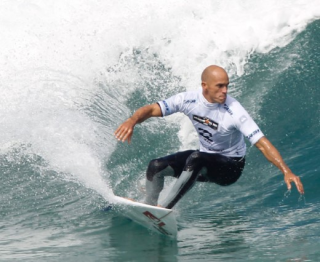 Then he asked them to describe Jesus.  Aside from stuff like, “Son of God” and “died for our sins,” they couldn’t say very much.  Frost said he’s noticed the same thing in the church and even in the seminary where he teaches.  He’s noticed people being unable to talk about Jesus the person.

It’s the idea that the only way to really connect with Christ is by retreating to worship services, or by going on retreats, or by going to places specifically labeled as “Christian.”  He doesn’t reject those experiences; he very strongly affirms them (as do I).  But he also emphasizes engaging with Christ in the world.

For those who care about connecting with Jesus, there can be the danger of living in a Christian “bubble.”  There’s the danger of not being able to see Jesus in the cinema, in art, in the workplace, in school, in science, in everyday life.  As he was talking about this stuff, it dawned on me that this is what Ascension is all about.

As the Nazarene professor Andy Johnson puts it, “our very flesh is constantly interchanging elements with the rest of the material universe.”  There’s that subatomic particle stuff again!  At that level of reality, it’s hard to draw a line between “us” (our bodies) and “not-us.”  Thinking about that theologically, with God’s raising the body of Jesus, “the redemption of the cosmos as a whole has begun.”[2]

(You know, the difficulty in seeing a line between “us” and “not-us” gives a whole new spin on describing people as “joined at the hip.”)

Because of the Ascension of the Lord, Jesus as the Christ is everywhere.  What that means is there are no “God-free” zones.  Nothing is truly godforsaken.

Frost also talks about “prevenient grace,” that is, the way God works prior to anyone’s action.  God extends grace before we decide to do this or that.  The question is not: “Will we bring God into a godless world?”  The question is: “Will we find out what God is already doing in the world and get involved?”  Again, there are no “God-free” zones.

So, here it is again, just in case what I’ve said isn’t crystal clear: why is the Ascension of the Lord so important?  Why must Jesus depart?  Why does Jesus say, in effect, “It’s time for me to fly!”?

Jesus must depart, because frankly, it’s time for the disciples to grow up.  In John 16, Jesus tells them, “it is to your advantage that I go away, for if I do not go away, the Advocate [the Holy Spirit] will not come to you; but if I go, I will send him to you” (v. 7).  He’s told them they will do even greater things than he has done (Jn 14:12).

It can be difficult to understand.  Earlier in Luke 24, the two disciples on the road to Emmaus are downcast; they’re crestfallen.  Jesus comes up and speaks with them, though they don’t recognize him.  They say “we had hoped that he was the one to redeem Israel” (v. 21).  But notice what happens.  “Then beginning with Moses and all the prophets, he interpreted to them the things about himself in all the scriptures” (v. 27).

Now we have today’s scripture reading.  When he appears to the gathered group of disciples, he tells them, “These are my words that I spoke to you while I was still with you—that everything written about me in the law of Moses, the prophets, and the psalms must be fulfilled” (v. 44). 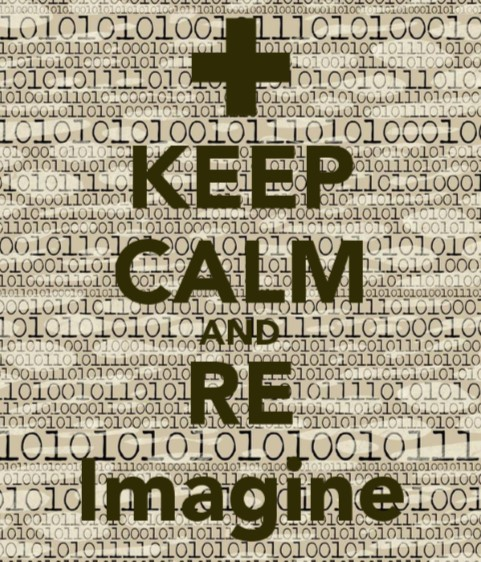 Our friend Andy Johnson points out, “the Old Testament never directly says that the Messiah will suffer, die, or be raised from the dead.”[3]  That’s true, and that’s why Jesus was such a problem, even for well-meaning people.  The disciples need to understand.  So Jesus repeats what he did on the road to Emmaus.  For the disciples who think they’re seeing a ghost, “he opened their minds to understand the scriptures” (v. 45).

Johnson says, “Jesus begins reshaping their imagination, reshaping the categories they had used to make sense of what God was doing in their world.”  Their culture has shaped them to think in a certain way.  Then here comes Jesus, completely turning that stuff on its head!

There can be a difference between translating and interpreting.  When we translate, we go from one language to another.  For example, we take the English word “dog” and go to the Spanish word “perro,” or to the Turkish word “köpek.”  However, when we interpret, we assign meaning, and sometimes that meaning can be quite different from what we expect, or want, to hear!

The disciples have their vision radically expanded, re-imagined.  They must learn “repentance and forgiveness of sins is to be proclaimed in his name to all nations, beginning from Jerusalem” (v. 47).  The old categories no longer work.  They can’t presume to “have” or “own” Jesus.

Can we think of ways in which we do that?  Is it possible others are turned away if and when we present Jesus as our property?  (I include myself in the question.)  Do we too rarely ask the question, “How can we as the church serve the community?”  Or do we too often wonder, “What can they do for us?”  Remember, there are no “God-free” zones.

Having said all that, I believe the desire to serve the community is in evidence here.  I believe it was evident on the day of the presbytery meeting.  You are building on the past and allowing a new vision to form.

I also quoted our Book of Order’s warning about “the human tendency to idolatry and tyranny” (F-2.05), and how that might appear in us.  Do we ignore prophets, avert our eyes from visions, and disregard the dreamers?  Possibly, but it looks like good progress is being made on encouraging the dreamers—paying attention to our own dreams. 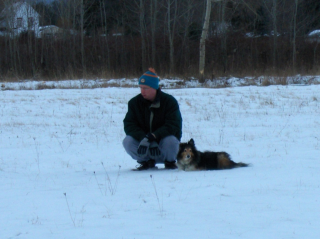 Are we pushing the boundaries, even as it dawns on us the ascended Christ is everywhere?  Therefore, do we understand that we are interwoven with everything around us?

Today’s affirmation of faith is based on Ephesians 1, which is the epistle reading for Ascension.  The end of it comes from verses 22 and 23.  God “has put all things under [Christ’s] feet and has made him the head over all things for the church, which is his body, the fullness of him who fills all in all.”  The one whose body fills all in all.

We are the church of Jesus Christ, and the fullness of Christ fills us.  So, let us weave our stories into the visions that are forming and transforming us.  Let us not disregard the dreamers, but rather encourage each other in following our dreams.  The Spirit who has been promised gives us strength.  Like those first disciples who witnessed the Ascension, we can go out with joy.