matters of death and life

By now, most of you have heard about the seizure which led to my diagnosis of brain cancer.  That was in November 1995.  I had surgery and radiation treatments and was preparing for chemotherapy.

Three months later, in February ’96, Banu and I and a friend of ours were in our apartment.  It was getting a bit late at night.  At some point, our friend had a worried look on her face.  The next thing I knew, EMT personnel were there, asking me if I knew where I was.  It turned out that I had had another seizure.  So back to the hospital.

Like the first time, they gave me some tests, including an MRI scan.  The next day, my doctor came into the room, smiling from ear to ear.  He was positively beaming.  He had good news on what caused my seizure.  They were concerned about regrowth of a tumor, but that’s not what it was. 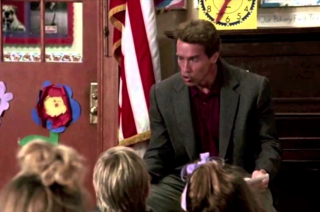 There’s a scene in the movie Kindergarten Cop which seems oddly appropriate.  Arnold Schwarzenegger plays a cop who goes undercover as (guess what?) a kindergarten teacher.  He’s tracking a little boy’s criminal and scary father who’s on the run.

On his first day, the kids are being, well, little kids.  It’s a tough assignment.  Arnold complains, “I have a headache.”  A little boy responds, “It might be a tumor.”  Arnold snaps back, “It’s not a tumor.”  So there’s my doctor (minus my terrible Austrian accent)!

He was happy because I didn’t have a tumor; it was a staph infection.  He was smiling.  This apparently was good news.  I was awaiting a “good news” verdict.  Since it was just an infection, they could give me some medicine, and I’d be home the next day.  Then the doctor said they could operate in the morning.  It seems a staph infection can be pretty serious!

My heart sank.  It wasn’t the second surgery that bothered me so much; it was the realization that this hospital stay would be a lot longer than I had anticipated.  I suddenly felt like a prisoner.  After the doctor left, I told Banu I was glad it wasn’t a tumor, but it still didn’t feel like good news.

We could take my little tale and end it with the smiling doctor and the happy news.  End of story.  Let’s celebrate!  Unfortunately, that was not the end of the story.  Perhaps I was just being a big baby, but I didn’t have a festive feeling.

Now, regarding another story, we’re told it’s “a christianish way of knowing Jesus.”[1]  That’s how Methodist pastor Robb McCoy characterizes “focusing on the happy ending without also seeing the dangerous ramifications of what Jesus accomplished.”

Now, cue the heart-rending, achingly beautiful music as the miracle of miracles occurs.  Lazarus walks from the tomb, risen from the dead. 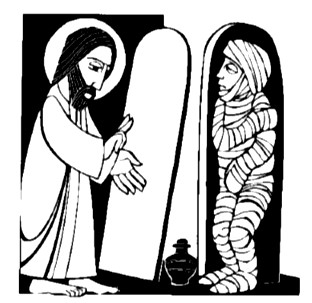 Well, if you read the entire chapter, you can tell that’s not the end of the story.  I’m using one verse of the lectionary text and continuing with the other side of the story.  I appreciate the lectionary.  It forces us to scriptures that we ordinarily might ignore.  But I’ve also aired my complaints about it.  Sometimes good stuff gets left out!

That hasn’t escaped the attention of Rev. McCoy, who comments on ending the reading at verse 45.  “It doesn’t just cut off the story before it gets interesting, it cuts off the story before the most important part is revealed…  [T]he story of Lazarus is not so much about the power of Jesus.  The story of Lazarus is about how people react to this miracle.”

“Many of the Jews therefore, who had come with Mary and had seen what Jesus did, believed in him” (v. 45).  To be honest, I’m not sure what my reaction would be.  Seeing someone that you knew for a fact had been four days’ dead just walk out of the tomb—what do you do with that?  It is a matter of death leading to life.  So for the folks on the scene, being witnesses to that elicits a major awakening of faith.

So how about that party?  We’re going to have a toast to Lazarus and, of course, to Jesus!  Everyone’s coming.  “But some of them…”  Hold on, it doesn’t look like everybody’s in a mood for merry-making.

“But some of them went to the Pharisees and told them what he had done” (v. 46).  Seeing the love Jesus has for Lazarus, and seeing the loving power he exhibits on his behalf, many of the onlookers come to believe in Jesus.  They come to believe that he is the Messiah, even if it defies their expectations of what the Messiah should be.  But not all of them believe.

(A couple of quick notes.  Regarding the Pharisees: they’re usually portrayed as bad guys in the New Testament.  They actually were defenders of the Jewish people in the face of outsiders who wanted to oppress them—including the Romans.  And regarding John’s use of the term “Jews,” context is necessary.  In his time, the church is indeed being persecuted by certain Jewish elements.  Still, the Greek word used (ιουδαιος, ioudaios) might be better translated as “Judeans.”  The use of the word “Jews” has led to centuries of persecution by Christians!)

How do the Pharisees respond to the news of Jesus’ miracle?  They and the chief priests call a meeting of the council, the Sanhedrin.  They acknowledge, “This man is performing many signs” (v. 47).  However, “If we let him go on like this, everyone will believe in him, and the Romans will come and destroy both our holy place and our nation” (v. 48). 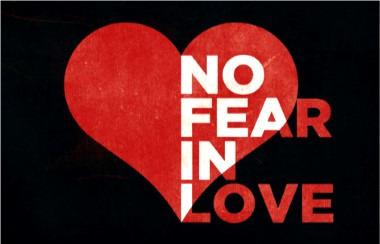 They are well aware that Jesus is using the power of life against the power of death.  In their heart of hearts, they know that.  Still, just like the people who brought word of him to them, they also are acting from a place of fear.  McCoy says, “They feared Jesus because his was a power they could not abide.  They feared Jesus because he was threatening their way of life.  He was threatening their comfort, their position, and ultimately their power.”

Therefore, the choice is made.  Jesus must die.  Caiaphas, the high priest, chides them.  He warns them against any possible indecision.  “You know nothing at all!” he gripes.  “You do not understand that it is better for you to have one man die for the people than to have the whole nation destroyed” (vv. 49-50).

Caiaphas is speaking at the practical, political level.  Why not sacrifice one person if it keeps the Romans from lowering the boom?  Unknown to him, God has other ideas in mind.  St. John says by virtue of his position as high priest, Caiaphas is giving voice to divine will.  Yes, Jesus will die for the nation, and the people of God everywhere will find, in that death, unity.

Caiaphas and his friends are sure of something.  Jesus is dangerous.  Even Lazarus is dangerous.  In chapter 12, he also is targeted for termination.  He is living, breathing evidence of what Jesus has done.  Because of him, even more people are turning to Jesus.  This fellow who walked out of the tomb needs to go right back.  He needs to take a dirt nap!

After the Lazarus event, nothing can be the same.

It does seem like death can silence life.  Don’t we see that everywhere?  That’s what the enemies of Jesus are counting on.  And they get their wish.  The life of Jesus is snuffed out.  He’s as dead as dead can be.  It’s his turn to take a dirt nap.  But somebody wakes him up!

Our friend Rev. McCoy issues a warning.  Just as the chief priests were wrong to think that death could imprison Jesus, we are wrong—we are being christianish—“if we think that the power of Jesus is something that shouldn’t be feared.”  It’s a mistake if we too easily dismiss it.

How many of us have been inspired by a book or a movie or music but didn’t let it affect how we live?  What happens when we stop the story before we’re called to act? 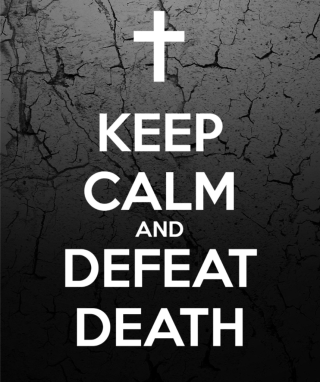 We do need to pray for courage, for bravery, but without giving in to bravado, to arrogance.  After all, Jesus knew when it was time to get the heck out of Dodge, and he spent some time in a “region near the wilderness,” remaining “there with the disciples” (v. 54).

Still, there is a time to come out, to come out of our fortresses.  We all hit high notes in our stories, but we must remember that our stories continue.  In these matters of death and life, the road is not always easy.  For some, it is rarely easy.  Still, know that we have a risen Savior who has gone through the worst of experience and remains faithful to us.  Our Savior defeats death and holds us in life.