I need to admit something.  There was a time when I would have never dreamed that I’d be doing what I’m doing now.  And I’m not talking about being a pastor, which I believe I mentioned once.  I mean what I’m doing right now this instant, that is, speaking in public.

I was one of those poor souls who would put “public speaking” near the top of the list of things I dreaded doing.  I had to force myself to take a public speaking class in high school. 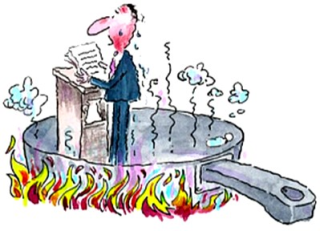 When I became a Christian and started going to church—I was 21 when I was baptized—my pastor saw something in me and asked if I wanted to preach a sermon.  (This was a church with Wednesday night services, so that would be my time slot!)  I think I said “yes” because, as much as for any other reason, I didn’t want to disappoint him.

The first time I preached, I’m sure I was visibly terrified.  I forgot to breathe.  My chest tightened up.  I found myself trying to race through the words.  (Oh Lord, please let this end.)  My vocal inflection was terrible, that is, unless you’re a fan of anxious monotone!  However, over time, I gradually got better.

There was one particular night when I was scheduled to preach.  I was completely calm, perfectly at ease.  Then while he was introducing me, the pastor, reflecting on past bouts of nerves said, “Well, I wouldn’t want to be him right now!”  He thought he was lightening the mood, trying to be helpful.  It didn’t work.  He inadvertently spoke worry and negativity into my brain.  I was back to being visibly terrified!  By the grace of God, I’ve made steps in conquering my fear of public speaking.

I begin with this reminiscence to demonstrate my tiny experience of gaining a little bit of courage.

Courage is something that is woven into the Easter narratives, in all four of the gospels.  We hear the message, “Do not fear.”  We hear the encouragement.  Even before we get to Easter, on Maundy Thursday, the gospel of John reports one of the last things Jesus says to the disciples: “take courage; I have conquered the world!” (16:33).  In other places, the Greek word (θαρσεω, tharseō) is translated as “take heart.” 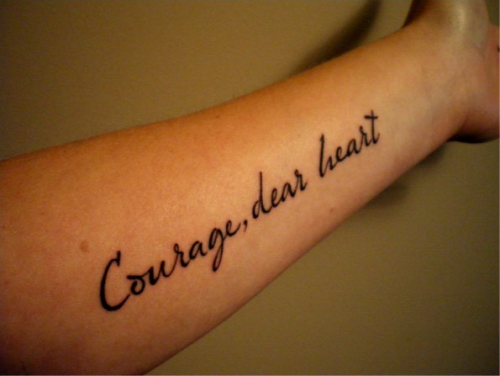 That makes sense.  Our English word “courage,” coming by way of French and before that, Latin, literally means “heart.”  It’s related to the word “cardiac.”  If you’ve got courage, you’ve got heart!

In today’s gospel lesson from Matthew 28, both the angel and Jesus say to Mary Magdalene and the other Mary (there were several Marys), “Do not be afraid” (vv. 5, 10).  Do not fear.  Do not lose heart.  The gospel writers list various permutations of women at the tomb of Jesus, but the one constant is Mary Magdalene.  She’s given special attention.  She is courageous in a way none of the male disciples ever are.

We see that she is sent—in John’s gospel, she’s the only one sent—to tell the other disciples that Jesus has been raised from the grave.  For that reason, she is called “apostle to the apostles.”  An “apostle” (αποστολος, apostolos) is “one who is sent.”  She’s a messenger to the messengers.

Ron Hansen reminds us that women “were not admissible as legal witnesses according to Jewish law.”[1]  The overall disbelief of the men regarding Mary Magdalene’s claims is to be expected.  It shouldn’t be a surprise that they seriously doubt what she’s saying, especially when it’s something so outrageous.

At the same time, Jesus did tell them that he would come back from the dead (v. 6, 26:32).  Still, what can you do with that—something so inconceivable?  And then there are those who say Jesus’ claims about resurrection were tacked on later, as an addition to Matthew’s gospel.

Having said all of that, sometimes we don’t take the disciples’ state of mind very seriously.  We already know the end of the story.  That’s what we’re celebrating today.  Death has been defeated.  It is the death of death.  Christ being raised means he can no longer die.  He is the pioneer of resurrection.  We who are in Christ share in the resurrection.  We will die and emerge with life eternal. 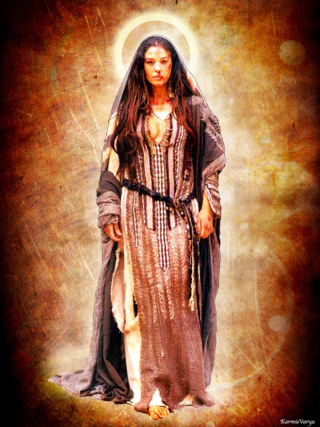 image of St. Mary Magdalene is by Karmie Varya at http://stmarymagdalenes.org/stmarymags-karmievarya.jpg

As I say, the disciples don’t know that yet.  Look at verse 1: “After the sabbath, as the first day of the week was dawning, Mary Magdalene and the other Mary went to see the tomb.”  There’s not much said about the sabbath after Maundy Thursday and Good Friday.  The sabbath is a time to rest.  However, I don’t think the disciples find much rest on that sabbath.

Shelly Rambo, who is a professor at Boston University School of Theology, has done work on the subject of trauma.  She has worked with military chaplains; they have firsthand knowledge.  For our purposes here, she’s looked at trauma from a theological point of view.  Thinking about my comment on our knowing the end of the story, she says in our rush to get to Easter (to get to the party!), we tend to not pause and reflect on Holy Saturday.  It’s so important to not fly past it.  And here I am saying it, when it was yesterday!  But that’s the beauty of the liturgical calendar.  We re-live the life and story of Jesus every year.

Rambo says that traumas don’t necessarily end.  “Traumas are moving—and we could say bleeding—into other traumas.”[2]

She talks about church folks, saying “in the case of many people who are living beyond traumas, the resurrection [is] often heard as a rush to get over it, to recover, or as pressure to live into resurrection when in fact the reality of their trauma [is] still very present.”  It is possible for there to be an element of insensitivity when we automatically expect everyone to join the festivity.

So back to the disciples.  Remember, they don’t know what’s going to happen.

Our friend Shelly continues, “That made me think about how hard it is to witness suffering, how hard it is in the chaos in which you don’t know whether life’s going to emerge for someone.  So in a sense, the preacher or the Christian leader becomes the Mary and the beloved disciple and the Thomas who don’t have a clear sign of life.”

At first, the disciples don’t recognize Jesus.  In John’s gospel, Mary Magdalene mistakes him for the gardener.  Then, in the depths of their sorrow, they realize that it really is him.  Jesus is alive!  Notice how Matthew describes the two women.  “So they left the tomb quickly with fear and great joy, and ran to tell his disciples” (v. 8).

“With fear and great joy.”  Maybe one way to look at that would be as the transition of Holy Saturday to Easter Sunday.

(Maybe we get a small taste of fear and great joy by riding a roller coaster!)

I started with my story of moving from almost panic and paralysis to a much greater sense of comfort when speaking in public—one little victory of courage.  How about more meaningful cases of courage?

How about among you?  Can you think of a situation in which you found courage, you were encouraged, when it looked like death had won?  When it looked like all hope was lost?  Then, somehow, new life emerged?  A light began to shine in the darkness?  Did you discover newfound powers?  And to continue with the borrowed image: have you ever been in a state of “fear and great joy”?

The constantly self-emptying, loving community that is the Holy Trinity permeates throughout all of creation, throughout all the cosmos.  Because of that, nothing is ever truly lost.  No act of self-emptying, however small, is ever wasted.  And ultimately, at the end of the day, nothing that dies truly remains dead.  On this weekend, we remember the reality of death (for now), but we celebrate the inexpressible joy that comes with rebirth and resurrection. 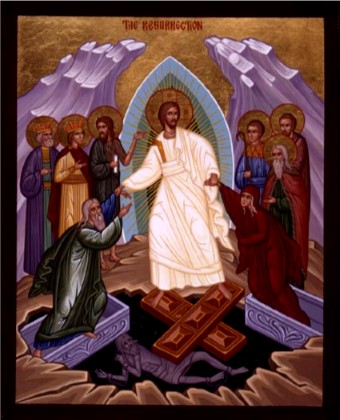 I won’t speak for anyone else, but we non-courageous types need that message and the hope of life it carries.

“Jesus said to them, ‘Do not be afraid; go and tell my brothers to go to Galilee; there they will see me’” (v. 10).  Jesus said, “take courage; I have conquered the world!”