Home Wellspring
boring you with law and love
hypocrites

we saw it (heard it) for ourselves

I’m a fan of Star Trek—of all of the TV series and the movies.  But I’m not one of those characters who wear Vulcan ears or try to speak the Klingon language!  One of my favorite episodes of Star Trek: The Next Generation is the one called “Transfigurations.”  (What a coincidence!  Today just happens to be Transfiguration!) 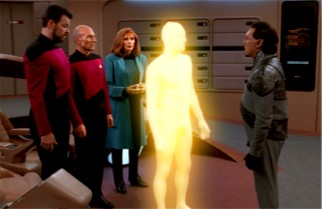 The crew of the Enterprise discovers in the wreckage of a ship a seriously wounded alien.  (They’ve never encountered his species.)  It turns out that he has amnesia, so they refer to him as “John Doe.”

“John” makes astonishing progress in recovering from his injuries.  But there’s something else about him.  His body is undergoing transformation at the molecular level; every now and then, he convulses in pain.  Still, one wouldn’t know it by his behavior.  John has a comforting, peaceful presence; it endears him to everyone he meets.  And John has power.  He demonstrates his ability to heal—and even to bring somebody back from the dead!  (Does this sound familiar?)

Slowly, John regains his memory.  When he’s told by Capt. Jean-Luc Picard (played by Patrick Stewart) that they’ve figured out the location of his home world—and plan to return him there, he says that he can’t go back.  But he still doesn’t know why.  He only knows that he was trying to escape from his planet.  He believes that he’s on some kind of mission.

Eventually, we find out what it is.  The Enterprise is stopped by a ship from his home planet, the captain of which demands that John be turned over to him.  The man is furious at John, but more than that, he’s afraid of him.  He claims that John is a fugitive, sentenced to death for subversive activities.  When Picard dares to question this other captain, the Enterprise is hit with a field that paralyzes everyone on board—they can’t even breathe.

John touches a wall and sends a wave of light throughout the ship, healing the entire crew.  In that moment, he attains perfect clarity.  He now knows who he is and why his leaders are terrified of him.  He explains that his species is on the verge of a wondrous transformation.  That’s why he had to flee—to have time to let the process run its course.

And then, before everyone’s eyes, John is transfigured.  His entire body begins to glow with intense light, until he is transformed into a being of energy.  He says there is now nothing anyone can do to prevent him from returning to his people and telling them that they, too, can embrace the transformation.  No one can stop him from letting them know that they, too, can be transfigured.

The story of this transfiguration is a fictional one.  (By the way, I think the plural title “Transfigurations” speaks to how all those witnessing John’s transformation are also changed.)

There is, of course, another transfiguration which is mentioned in St. Peter’s Second Letter.

A quick note on that: this letter was written after Peter’s death.  There’s a reference in chapter 3 to the letters of Paul, which are now being gathered together and beginning to have the authority of scripture.  The deaths of Peter and Paul were pretty close together in time.  There’s no attempt by the author to trick anyone.  Writing in the name of someone else was a common practice in those days.  It was a way to honor revered teachers, to speak in their voice. 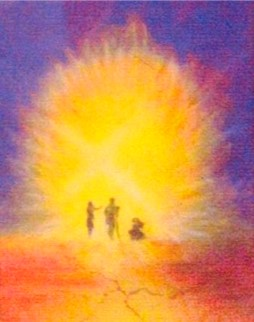 Now, back to the transfiguration of Jesus.  As we see in Matthew’s gospel, Jesus takes Peter, James, and John up the mountain (17:1-9).  And then, before their eyes, he begins to shine like the sun; he radiates with the glory of God.  He is joined by the epic figures of the Old Testament: Moses, the giver of the law, and Elijah, the prophet among prophets.

Second Peter is addressed to an audience which is plagued by disbelief and mistrust.  The years are going by, and the Lord hasn’t returned.  Prophecies and predictions are spreading around.  People are gathering followers and saying, “Listen to me!  God has let me in on the secret.”  We might even say they’re promoting conspiracy theories.

Isn’t it great that we don’t have to deal with that foolishness today?  Hold that thought!

Our author says, “Ignore those false prophets, those silver-tongued, slippery devils.”  Instead, he says, “we did not follow cleverly devised myths when we made known to you the power and coming of our Lord Jesus Christ, but we had been eyewitnesses of his majesty” (1:16).

I like how the Revised English Bible puts it.  “It was not on tales, however cleverly concocted, that we relied…”  It wasn’t even on tales as cleverly concocted as Star Trek!  Another version says “any sophisticated myths.”[1]

Maybe that’s ironic, since we might consider ourselves today too sophisticated to believe such a ridiculous story.

The late Dwight Peterson, who taught at Eastern University, deals with what we just saw, our writer’s concern to establish the reality of the apostles’ experience and to not simply dismiss it as fantasy.

He says, “His appeal to the Transfiguration is an attempt to root the eschatological expectations of the church in the eyewitness (and ear-witness) experience of those who were present at the Transfiguration.  They saw Jesus ‘receive honor and glory from God’ that day, and they heard the authoritative voice from heaven: ‘This is my beloved son, with whom I am well pleased.’”[2]  They saw the majesty with their own eyes, and they heard the voice with their own ears.

This letter is presented as Peter’s last will and testament.  Right before today’s reading, we see in verses 13 to 15: “I think it right, as long as I am in this body, to refresh your memory, since I know that my death will come soon, as indeed our Lord Jesus Christ has made clear to me.  And I will make every effort so that after my departure you may be able at any time to recall these things.”

There’s an effort to reassure the church that even when Peter is dead and gone, his message will continue as a firm foundation. The false prophets are presenting a competing version of reality.  To refer to them as “false prophets” and “false teachers,” as he does at the beginning of chapter 2, is definitely putting a negative spin on things!  This is a picture our author (or artist) paints of people who are, not simply mistaken, but have an intent to deceive.  I’m not sure all of them have such motives, but nowadays we have become familiar with the term “alternative facts.”  It’s kind of like the movie The Matrix (1999), in which the human race is dealing with parallel realities, and the truth depends on whether or not you’re aware of the other reality.

Fortunately for the early church, they aren’t held hostage to alternative facts.  Second Peter exposes the alternative gospel that is being disseminated.  The writer bases his argument on “the prophetic message” (v. 19).  Another version says, “All this confirms for us the message of the prophets,” that is, the true prophets, adding, “to which you will do well to attend” (REB).

The glory of transfiguration shines into our sophisticated, sarcastic, and jaded darkness.  The temptation to be cynical these days might possibly be the greatest any of us have experienced.  For those, while yawning, say they’ve seen it all—maybe for us, if we say the same thing—that light of transfiguration, the radiance of the morning star, will glow ever more brightly and show us the new thing that God is doing.  That is, it will happen if we throw open the shutters.  That revelation cannot be denied.

Like the story in Star Trek with the transfiguration of John Doe, it happens before everyone’s eyes, including the frightened captain who would have him killed.

That prophetic message is true, because it isn’t based on “human will, but [on] men and women moved by the Holy Spirit [who] spoke from God” (v. 21). We are on the doorstep of Lent, a time of reflection, repentance, and even lament.  Too often, our eyes are closed.  We turn away from the light.  What transfiguration needs to happen in our lives?  Or perhaps better, to what transfiguration do we need to bear witness?  To what do we need to testify?  There are those who would convince us of alternative facts, false prophecy, a fake gospel, fake good news.