Home Wellspring
traveling with Teilhard
from false life into true

The wording of my title has been carefully chosen.  First of all, “Independence Day.”  It is the one day of the year in which we’re especially called to be grateful for the gift of nation.

Then there’s the word “theological.”  That speaks to questions like:  how is God involved in it?  Where is God to be found?  And they are “reflections.”  I don’t pretend this is some universal truth that applies to everyone.  I’m speaking from my own experience.

And indeed, this is the viewpoint of “one” American.  But though I am one, I am an “American.”  In some ways, I feel like I could be nothing but an American.  Having been adopted as an infant, I don’t know who my genetic ancestors are.

In a similar way, America as a nation has no single clear understanding of its genetic makeup.  After all, what does an American look like?  What does an American sound like?  Our political history mainly ties us to England, but as a whole, Americans look to all parts of the world, not to mention those who were here before the Europeans ever showed up.

So there’s that.  But I do have a better reason for saying that “I feel like I could be nothing but an American.”  It’s because I love my country.  I love America.

For the first ten years of my life, we were a military family.  My dad was posted to various naval bases around the country, from coast to coast to coast.  That meant plenty of moving around, guaranteeing that I saw a whole lot of this country.

But like most of us, whether or not we’re from a military background, I was taught at an early age that God has blessed America.  However, my young mind—not so good with nuance—made the assumption that since God had blessed America, we were better than people from other countries!  (I’ve since learned that Banu was raised with a similar belief about Turkey—that’s there’s nothing more glorious than being a Turk!) 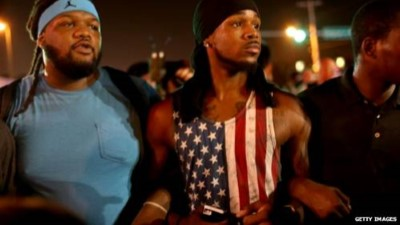 There is within the spirit of America a conviction that people have human rights, that they shouldn’t be tortured, that the government shouldn’t tell them how to think, that they are truly “endowed by their Creator with certain unalienable Rights, that among these are Life, Liberty, and the Pursuit of Happiness.”  That’s why it’s a shame when we, as a country, don’t live up to those convictions.

I realize that many say faith and politics should be kept separate.  (By the way, that’s a whole different animal from separation of church and state!)  When it comes to airing one’s political opinions from the pulpit—such as telling people who to vote for—I would agree.  As Christians, we need to learn to think theologically, not just politically.  As I said earlier, “Where is God in this?  How do we think of God?”  That’s what the New Testament church does.

The gospel is inherently political; it’s inescapable.  Words like “Lord” and “Savior,” in the first century, are political terms.  They aren’t merely spiritual in the sense of being disconnected from everyday life.  The terms “Lord” (κυριος, kurios) and “Savior” (σωτηρ, sōtēr) are titles attributed to the emperor.  Nero and Domitian, a couple of emperors with really big egos and serious self-esteem issues, are especially insistent about it.

When the early Christians call Jesus “Lord and Savior,” they are well aware of what they’re doing.  For them, it isn’t an empty phrase.  It’s not something to put on a bumper sticker or post on Facebook.  They are saying “no” to the arrogance of empire.  They risk losing their jobs, their freedom, or something even worse.

We see the scribes and chief priests sending representatives to Jesus, but they’re hardly doing so in good faith.  The scripture calls them “spies who pretended to be honest.”  That’s not a vote of confidence.  Their job isn’t to pursue meaningful dialogue; their job is “to trap him by what he” says, so that they can hand him over to the Romans (v. 20).  They aren’t there to listen; they just hope he screws up!

The backdrop of our story is the payment of taxes to the Roman authorities.  Any loyal Jew, with any patriotic sensibility, considers being taxed by this foreign government reprehensible.  The enemies of Jesus have racked their brains, trying to come up with some way to get rid of this guy.  He’s drawing too much attention, and they feel that can only spell trouble.

Somebody has one of those “aha!” moments, and says, “I got it!”  If Jesus teaches “the way of God,” let’s see what he says about the law.  If Jesus says it’s legal to pay those taxes, he’ll anger the Zealots.  (They are the Jewish insurgents who want to overthrow the Romans, by any means necessary.)  No doubt they will say, “If he won’t lead the revolt, then it falls to us.”

However, if he says “no,” the Romans will step in and take care of him.  Either way, we win.

The folks trying to trick Jesus haven’t done their homework, or they might have guessed their plan won’t work.  Jesus is proactive, not reactive, about the job of reconciliation.  He is intentional.

For example, among his disciples he’s included Simon the Zealot, one of those Jewish revolutionaries.  He’s also included Matthew the tax collector, a collaborator with the Romans.  Not exactly birds of a feather.  Compared with them, Donald Trump and Hillary Clinton are identical!

In answering the question about paying taxes to Caesar, Jesus elevates the discussion.  Changing the perspective, he gets to the heart of the matter.  He gives the perfect answer to their question, one that invites them to challenge their assumptions. 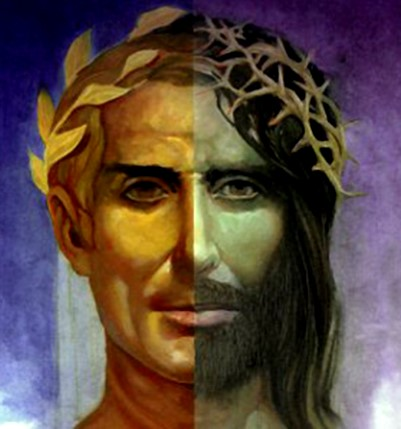 Ten days after the 9-11 attacks, a well-known person spoke of his own assumptions that needed to be challenged.  I’m referring to the guy who went from being Terminator to Governator, Arnold Schwarzenegger.  He spoke of growing up in the scarcity of postwar Austria and of his dream of going to America.  He arrived in 1968 with $20 in his pocket, and within six months starred in his first movie, the classic work of art, Hercules in New York.

He said, “I called all my friends back in Europe and said: ‘It’s true!  You can do anything in this country!  Come over here!  It’s everything you imagine—and more!’”[1]

Arnold spoke of 1989, when President George H. W. Bush named him the Chair of the President’s Council on Physical Fitness.  He traveled all over the US, promoting fitness programs in schools.  He believed if a poor farm kid from Europe could make it in America, anybody could.  Encountering the poverty of American cities forced him to challenge his assumptions.  He said he used to go around saying, “Everybody should pull himself up by his own bootstraps—just like I did!”  But he changed, and said, “What I learned about this country is this:  Not everybody has boots.”

Arnold finished by saying that “it’s not just the bodybuilding and the business and the box office for me anymore.  Helping the kids who need help is the most important goal I have.  This is what it means for me to be an American.  Maybe that’s what it could mean for you, too!  No matter how much success you have, you can be more successful by reaching out to someone who needs you.”[2]

We are called, both as Americans and especially as Americans of faith, to expand our vision, to look outward, to be proactive about reconciliation—to take the first step in peacemaking.  We’re called “to form a more perfect union.”

And again, as the church, St. Paul says in 2 Corinthians, “if anyone is in Christ, there is a new creation: everything old has passed away; see, everything has become new!  All this is from God, who reconciled us to himself through Christ, and has given us the ministry of reconciliation” (5:17-18).

Our second hymn today, “Lift Every Voice and Sing,” was one I had never heard or sung until going to seminary in the 90s.  I found out that it’s often called the national anthem of the black church.  It was that second verse which reinforced it for me.  “We have come / over a way that with tears has been watered; / We have come, / treading our path through the blood of the slaughtered.”

That comes from the black experience of America.  I’ve had friends who told me some stories, stories of everyday life: stuff I’ve never had to deal with or even think about.  Still, black history, Native American history, Latino history, white history (although we usually don’t think of it that way)—all of that and more is American history.  But more than just national history—the civic side of things—all of that belongs to church history.

As Americans who belong to the body of Christ, we are called to actively celebrate the good and to challenge the injustices, not only in our country, but in ourselves.  To say that each person is born with inalienable rights means respecting and honoring those who are different from us, in whatever way.

It also means not denying our identity in Jesus Christ.  It’s easier than we think to conceal the cross behind the flag.  Remember, there is a difference between Christ and Caesar!  We mustn’t confuse the two as we rightfully celebrate, as we seek to be grateful to God for the gift of nation.

May we live lives that are authentically Christian this Independence Day.  May we sing with sincere belief in mind and genuine joy in heart:

“Shadowed beneath Thy hand / may we forever stand, / True to our God, / true to our native land.”