the art of Joban Friday

Who can doubt that the literature of Good Friday contains some of the most delicate and yet most disturbing images in all of sacred art? It is rivaled by the Psalms of lament, the confessions of Jeremiah, and of course, the book of Job. Our Tenebrae service, which we had on Maundy Thursday last night, included some texts which properly belong to Good Friday. The readings were from the gospel of Luke. Here is the scene in which Pontius Pilate yields to the cry of the mob, which was read with a touch of pathos by the liturgist:

“Pilate then called together the chief priests, the leaders, and the people, and said to them, ‘You brought me this man as one who was perverting the people; and here I have examined him in your presence and have not found this man guilty of any of your charges against him. Neither has Herod, for he sent him back to us. Indeed, he has done nothing to deserve death. I will therefore have him flogged and release him.’

“Then they all shouted out together, ‘Away with this fellow! Release Barabbas for us!’ (This was a man who had been put in prison for an insurrection that had taken place in the city, and for murder.) Pilate, wanting to release Jesus, addressed them again; but they kept shouting, ‘Crucify, crucify him!’ A third time he said to them, ‘Why, what evil has he done? I have found in him no ground for the sentence of death; I will therefore have him flogged and then release him.’ But they kept urgently demanding with loud shouts that he should be crucified; and their voices prevailed. So Pilate gave his verdict that their demand should be granted. He released the man they asked for, the one who had been put in prison for insurrection and murder, and he handed Jesus over as they wished.” 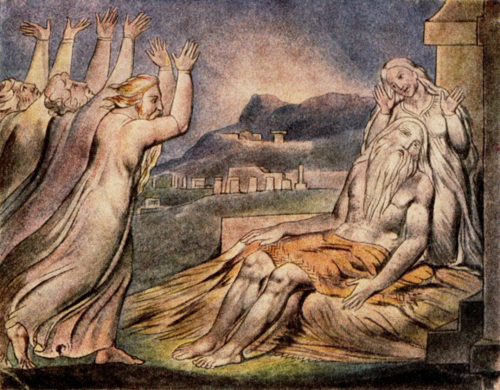 In 1900, Robert Watson had a similar feeling of the delicate and disturbing literature of the holy when he produced his text on the figure of Job. He begins with the opening lines:

“The Book of Job is the first great poem of the soul in its mundane conflict, facing the inexorable of sorrow, change, pain, and death, and feeling within itself at one and the same time weakness and energy, the hero and the serf, brilliant hopes, terrible fears. With entire veracity and amazing force this book represents the never-ending drama renewed in every generation and every genuine life.”

The cross can be seen as posing the question that upends our expectations of what is blessed and good in life. In an almost Zen-like fashion, it speaks volumes without uttering a word. Perhaps three or four centuries earlier, an author compiled a work verbally profuse with haunting beauty.

Watson’s book isn’t light reading. But if you’re interested in delving deeply into the world of Job (with not a small bit of Watson’s commentary and viewpoint!), then this book is for you. Over and over, you find a celebration of creativity and imagination.

It is worthy of a Joban Friday.