During the time of the prophet Amos’ ministry, the mid 8th century B.C. (about 760-750), Jeroboam II is king of Israel. His reign has been long and prosperous. His army has reclaimed land in the north that had been conquered, and the economy is booming. Having said that, Jeroboam has come to the throne during a period when Israel is on borrowed time. There is a certain amount of luck involved.

To the east, the mighty Assyrians have had to halt their westward expansion. They’ve had their hands full, dealing with intrigues inside the empire and also fighting the Babylonians and the Elamites—areas near what we now call the Persian Gulf. But don’t count the Assyrians out: they’ll be back!

Well, let’s hear what he has to say. In chapter 6, he speaks of woe to “those who are at ease in Zion,” to “those who feel secure on Mount Samaria,” to those who are “the notables of the first of the nations” (v. 1). So in verse 1, Amos begins the passage with “the first of the nations.” In verse 7, he ends it with “they shall now be the first to go into exile.” That’s when the Assyrians make their return!

“So you think you’re the first of all?” the prophet asks the rich and powerful. “Well, guess what? You will be the first!”

It’s in verses 4 to 6, however, that Amos really makes his point. “Alas for those who lie on beds of ivory, and lounge on their couches, and eat lambs from the flock, and calves from the stall; who sing idle songs to the sound of the harp, and like David improvise on instruments of music; who drink wine from bowls, and anoint themselves with the finest oils, but are not grieved over the ruin of Joseph!” (The term “Joseph” is sometimes used as a substitute for “Israel.”) 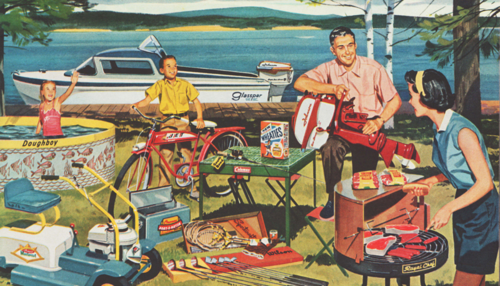 This is a picture of those gripped by the disease of “affluenza.” (Not influenza—affluenza!) It’s been noted that these are people “who enjoy a life of luxury and ease, but who are indifferent to the sociological and political problems which are about to bring the roof down upon their heads.”1

Seven verbs are used to describe this affluent society. They lie (on beds of ivory)…they lounge…they eat meat (as opposed to the poor, who can’t afford it)…they sing…they improvise…they drink wine (not from goblets, but by the bowl full)…they anoint themselves (with expensive perfume). This picture of decadence should not be unfamiliar!

There is an eighth verb mentioned, something that the affluenza of Amos’ audience prevents. It’s in the final line of verse 6. They “are not grieved” about the ruin of their nation. Their lifestyle has blinded and hardened them to its ill effects.

So, what are the idols that Amos identifies? As I hinted earlier, they may not be things that immediately come to mind. There’s no golden calf, like back in the days of Aaron and Moses. Rather, things that have become idols for them are questions of national pride, military might, and economic prowess. That’s why the prophet is so critical of their worship. Their heart and soul isn’t in God; they really worship these things.

Chapter 7 features a confrontation between Amos and Amaziah, the priest. Amaziah serves as a kind of religious chief of staff for the king. And in his report to Jeroboam about Amos’ activities, he accuses him of treason. The prophet is painted as a conspirator, a subversive.

Amaziah gives him fair warning. He tells Amos that it’s time to hit the road. Go back home—or else. Verse 13 provides a revealing remark. Amos is cautioned to “never again prophesy at Bethel, for it is the king’s sanctuary, and it is a temple of the kingdom.” Without realizing it, Amaziah is admitting that he’s a spiritual sellout. He has allowed his relationship to the king to determine his message. He’s unable to speak truth to power, because he has so completely identified with power.

So, to the idols of national pride, military might, and economic prowess, we now add, as Daniel Clendenin puts it, “pimping religion for political empire.”2 I don’t think it’s much of a stretch to say we can see these dynamics in America today. It’s safe to say we’ve done at least as much pimping with those idols than Israel ever did.

Bringing Cullen Murphy’s book, Are We Rome?, into the discussion, Clendenin says that America and the Roman Empire “both suffer from an exaggerated sense of exceptionalism.” That’s the idea that we’re a special case. We can get away with stuff no one else can.

Here’s but one example: just as the Romans spread their military throughout much of their known world, so have we. It’s hard to get an exact count, but a rough estimate would be almost 800 bases in over 70 countries and territories.3

I mention all this, not for the purpose of debating foreign policy, but to recognize what it does. In my humble opinion, it builds and defends a foundation for what is our greatest idol: affluenza. It’s a disease that infects all of us—a disease that leaves us restless, constantly urging us to consume, to buy more and more…stuff. It’s no wonder we can’t hear God! We’re too busy worrying, “How can I pay for the junk I already have? And for the junk I still want to get?”

I did say that affluenza infects all of us. Therefore, I have to ask the question: how does it infect me? This isn’t a disease with symptoms seen only in the purchase of items. It is a lifestyle. Do I insulate myself from people who make me feel uncomfortable with my privilege?

Do I too often join with the apostle Paul in saying, “I do not understand my own actions. For I do not do what I want, but I do the very thing I hate” (Romans 7:15)? Do I too often take refuge in that thought? To all these things and more, I have to say, with some degree of embarrassment, “Yes, I do.”

Benedictine writer Joan Chittister observes, “We take things and hoard things and give things to control our little worlds and the things wind up controlling us. They clutter our space; they crimp our hearts; they sour our souls.”4

Perhaps that’s one of the most seductive and sinister aspects of affluenza. It deludes us into thinking that we’re really living. It hides from us its ill effects on others and on the earth. We find ourselves unwilling to pursue the abundant life that Jesus Christ offers.

The process of choosing between the paths of, say, Amos and Amaziah is just that—a process. The choice between authentic faith and being a spiritual sellout isn’t made once and for all. It’s a continuous thing. And our Lord knows that.

As Anne Lamott puts it, “I don’t think much surprises him: this is how we make important changes—barely, poorly, slowly. And still, he raises his fist in triumph.”5

There are few changes more important for our own sake, and for the sake of the world, than dealing with the disease called affluenza. But with each bare, poor, and slow change we make—in the face of the powers of death—Jesus raises his fist in triumph.