Home Wellspring
must we sing the song of Lamech?
sheepish goats 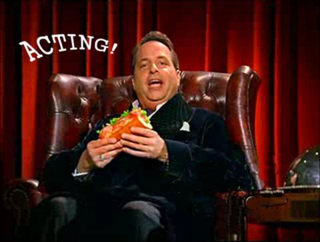 At the end of the parable of the faithful and evil servants in Matthew 24, we’re told the fate of the inattentive servant who goofs off when the master is away.  This servant “begins to beat his fellow slaves, and eats and drinks with drunkards” (v. 49).  When the master returns and catches him unaware, he is not pleased.  The servant is consigned to an unpleasant outcome.  He is to be “cut…in pieces and put…with the hypocrites, where there will be weeping and gnashing of teeth” (v. 51).

The primary focus of the parable is on watchfulness.  But that word “hypocrite,” or some variation of it, occurs over twenty times in the New Testament—the vast majority being in Matthew’s gospel.  This is the only parable in which it appears.
Our word “hypocrite” comes directly from the Greek hupokritēs.  It originally meant “interpreter” (as in interpreter of dreams) or “one who explains.”  Later, it took on the meaning of “actor,” like one who performs in a play.  It had the idea of speaking the lines in a play.  It’s this definition of “actor” that was the commonly-understood meaning of the word for centuries.  There was not necessarily a derogatory sense associated with being a hypocrite.  That is, unless someone was in a position of trust, like a political or religious leader!
In fact, it appears that it’s only after the New Testament era that “hypocrite” takes on the metaphorical sense:  people pretending to be something other than what they are.
Can we think of ways in which, in the morally neutral sense of the term, we are hypocrites?  Can we think of ways in which we act or play a role?  Could it be that our interpretation is messed up?
Does that ever cause us to weep and gnash our teeth?