Home Wellspring
sheepish goats
“I followed all the rules”

this Samaritan is a good one 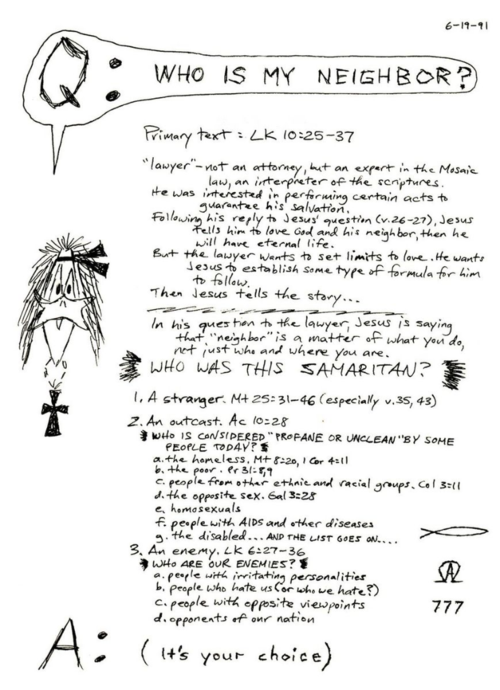 The doodling above are my notes from twenty years ago on a presentation I gave to the youth group in our church.  (It was in a notebook that I still have.)  At the top I ask the same question that the expert in the Mosaic law puts to Jesus.  His inquiry, “Who is my neighbor?” follows Jesus’ commendation of his statement that it is necessary to love God and neighbor.  In replying to the lawyer’s question, Jesus tells the parable that has been titled the Good Samaritan.
I won’t dwell too long on the latent racism involved with that title.  In making a Samaritan the hero of the story, Jesus is tapping into the Jewish hatred for a people they considered to be mongrelized.  Centuries earlier, when the Assyrians invaded and destroyed the northern kingdom of Israel, many different groups moved in, and there was considerable mixing of ethnicities.  The point is that few, if any, of Jesus’ hearers would expect the Samaritan to do the right thing.  (Who would think such a thing?  He must be one of the good ones!)
Looking back on my notes from twenty years ago, there isn’t much I would change.  Toward the bottom of the page, I make a comment about those with AIDS being considered profane or unclean by some people.  That reflects the spirit of the time.  A few months later, Magic Johnson would reveal to the world that he was HIV positive.
I might modify my statement near the top of the page about the lawyer’s interest in “performing certain acts to guarantee his salvation.”  There is more going on here.
In telling his parable, Jesus distinguishes between static and dynamic concepts of “neighbor.”  That is, he sees it as a more fluid thing.  He takes the noun “neighbor”­—something that can categorized (either one is or one isn’t)—and turns it into a verb. 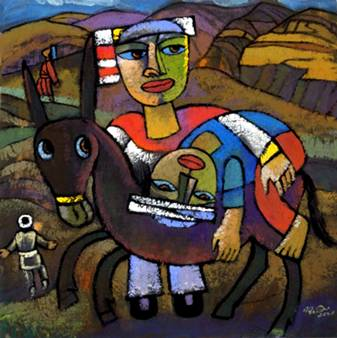 After telling the story of a man beaten and left for dead and the responses of the priest, Levite, and Samaritan, Jesus poses this to the lawyer:  “Which of these three, do you think, was a neighbor to the man who fell into the hands of the robbers?” (Luke 10:36).  “Neighbor” is defined as an action.  He replies, “The one who showed him mercy.”  Finishing the transformation in thinking and being, Jesus adds, “Go and do likewise” (v. 37).
Maybe being a neighbor can make any of us “one of the good ones”!
(The image is He Qi’s, “The Good Samaritan”)