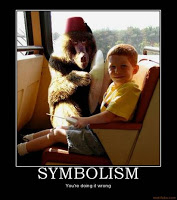 Okay, with the title of this post, maybe that’s getting a little carried away. Still, there’s no doubt that Revelation is filled with symbols. One of our members gave as a gift The Book of Revelation: A Commentary on the Greek Text by G. K. Beale. It is, as he said, “technical.” It’s clear that Beale spent a great deal of time in research as he wrote this book.

Beale sees a key verb in the first verse of the book: “The revelation of Jesus Christ, which God gave him to show his servants what must soon take place; he made it known by sending his angel to his servant John.” The Greek word for “made it known” is esēmanen. That normally has the sense of “signify” or “symbolize.” For Beale, what that means is, when approaching Revelation, “the essence of the book is figurative.” In general, “the scales of judgment should be tilted in the direction of a nonliteral analysis.” (52) The book has over 1200 pages, so that’s obviously not the extent of his argument.

I don’t understand Greek well enough to follow a great deal of what he says. However, it is refreshing to be spared the hysterical ranting of the so-called “prophecy experts.”