It’s understandable why this book so often gets mishandled and basically looks like the storyline for a horror movie. Apocalyptic literature has dramatic and vivid imagery. (“Apocalypse” itself means “uncovering,” “unveiling,” or “revelation.”) That’s why it lends itself so easily to misunderstanding and mistreatment. 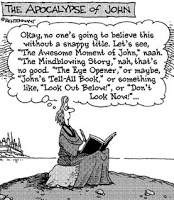 Isn’t it interesting how a revelation can be so obscure?